Next post
Lower Your Expectations And Ignore Those Empty Grocery Shelves 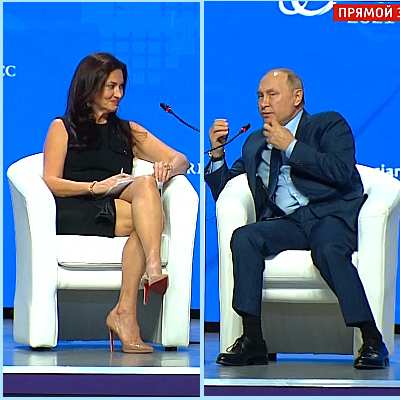 The Russian people used to have faith in President Putin, seeing him as the ideal Russian man. Putin the martial artist (honorary awards). Putin riding a horse shirtless in Siberia. Putin hunting and fishing, and telling his wife he was dumping her at intermission of the Mariinsky Ballet performance. So Russian. So 2000.

The Russian Federation aka Russia has got a lot of problems. The country has an aging population and high mortality rate. Unemployment, poverty, inflation and corruption are identified by the population as major problems. Their ideal Russian man is 69 years old. He is an aging, balding thug. In the world’s top economies, Russia is number 11. Communism/Socialism/Fascism doesn’t work. No wonder they are insecure.

And, sexist. Modern Russia has a list of 456 professions denied to women, including certain engineering jobs. Russia sucks bigly.

Insecure, sexist and sucky. That’s why Putin and his apparatchiks are projecting so much. Hadley Gamble is an Abu Dhabi based CNBC anchor and veteran reporter. She was in Moscow for Russian Energy Week to interview Vlad the aging Lothario. The Kremlin didn’t appreciate the black sheath dress and nude Christian Louboutin stilettos she wore. From the New York Post:

According to translations by the Daily Beast, Vladimir Soloviev told his state radio show that Gamble distracted Putin with her “sex appeal” — and acted “like she was in the movie ‘9½ Weeks’ or ‘Basic Instinct.’”

He even claimed she provocatively moved her bare legs — calling it her “basic instinct,” in an apparent reference to Sharon Stone’s infamous leg-crossing scene in the racy movie, the outlet noted.

“Hadley squeezed into a tight black dress, fluffed up her flowing hair, and put on a pair of nude leg-lengthening Louboutin high-heel pumps,” he said, saying her legs were “covered in shimmering body oil, as though this wasn’t a work assignment.”

Gamble “worked her body language to the fullest,” he told viewers, moving her legs, constantly playing with her hair, licking her lips, and “rolling out her tongue.”

I shouldn’t have to tell anyone this, but Hadley Gamble was not “squeezed” into that dress. It fit her well. Stilettos make just about any woman’s legs look better. By the way, I am not a fan of the red-soled Louboutin shoes. Never have bought them, but they were the dream shoes of a couple of friends of mine. These shoes are not meant for any woman who has to walk. They are meant for wearing when your doorman hails your taxi and you only have to make the few steps to the cabbie. Once delivered to your destination, the restaurant maitre d’hotel holds the door while you walk through the door. The red on the soles of the shoes wears off. Fact.

The insecure, aging strongman Putin had his own thoughts:

The 69-year-old Russian leader was caught on camera making flirty faces with her before they went onstage — where he then suggested she was “too beautiful” to understand some of his answers, The Hill noted.

But state media went further — accusing Gamble, 39, of being an operative sent to distract Putin, just as he’d allegedly used an attractive translator to try to get the upper hand over President Donald Trump at a 2019 meeting.

Poor Vlad, he is projecting his insecurities. And, speaking of that “attractive” Russian translator Putin tried to distract Trump with, that’s from the G20 summit in Osaka, Japan. The “attractive” translator is not by any means unattractive, but hardly a distraction for any man not just out of a Siberian gulag. You can see the picture of her here.

You can judge for yourself if Hadley Gamble acted unprofessionally in any way. Here is the video of the interview:

Of course, the Russians went after Gamble. The are jealous as get out, insecure and sexist. When Victoria Nuland worked for Hillary Clinton, the Russians criticized her for being disrespectful. Her crime is that she wore a red suit and striped booties.

What's especially comical is that the Russians are criticizing Victoria Nuland for "insulting Russia" by not wearing a skirt or a dress, and Hadley Gamble for wearing one they didn't like. https://t.co/1SPNv1RcS9 pic.twitter.com/rxCXOQNAbA

Object lesson: The Russians don’t like us because they are insecure, sexist and jealous. They have nothing but an aging Lothario and good ballet. Two thumbs up for Hadley Gamble. You go, girl.