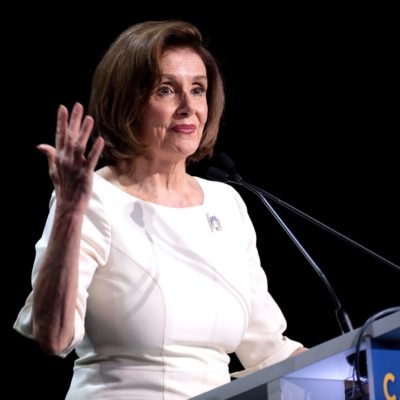 Pelosi is “selling” the HEROES Act to families in need. $1,200 government stimulus checks and extra SNAP benefits. Now, I know families who rely on these benefits and who legitimately need them. I also know there are individuals who do not need SNAP but still, under a broken system “qualify” and in turn, use these benefits. But now, those who take advantage of the SNAP system in the check out lines whilst pulling their cards out of their designer purses would get more benefits from this act. $12-dollar pints of ice cream for all! She sold the HEROES Act to “take care of our heroes”:

It is imperative that we address the needs of the American people with clarity on how we proceed. That is why today House Democrats are introducing the HEROES Act, named for our heroes, whose provisions are largely based on the four previous bipartisan bills we have passed. The HEROES Act focus on three pillars, opening our economy safely and soon, honoring our heroes, and then putting much needed money into the pockets of the American people.”-House Speaker, Nancy Pelosi

Buried deep in the pages in the HEROES Act is a nice padding for wealthy people who make money on dividends and royalties (let’s nod to our celebrities and former politicians who write books and have Netflix deals). We can also nod for tax cuts to real estate owners in blue strongholds.

And let’s not forget stimulus checks, stimulus checks and more stimulus checks. Including stimulus checks to undocumented immigrants. And that useless political science degree your nephew got two years ago (yet he still cannot find a J-O-B)? Forget about it. Student loan forgiveness via the Nancy gravy train is coming to the rescue! He’s a hero, don’t you think? Let’s honor him!

Of course, most believe the HEROES Act will be DOA once it hits the Senate but it does have the ringing endorsement of Adam Schiff.

I just voted YES on the Heroes Act to:

Doesn’t it just warm your heart that Schiff wants to help the American people? He wants to put money in your pocket. Such a stand-up guy. I mean, since when does he want to put money in the pocket of hard-working (or, in these days, wanna-be hard-working-but-can’t-because-tyrant-governors-won’t-let-them-open-their-business) Americans? And there are no strings attached to this money that is just going to magically fall from the sky and create unicorns and rainbows, right? We won’t have to pay for it on the flip side. Nor will our kids, their kids or their grandkids.

We don’t want money from the government. We want be able to open our business, and get our life back. Let’s Open America!

They still don’t get it. Most Americans do not want to stay home and collect a stimulus check. They want to get back to work. They want to open their businesses. They want to patronize these businesses in their community. They want to support these workers and their families. Speaking of staying home, saving lives, flattening the curve and the “new normal” BS that has been rammed down our throats ad nauseam, the House not only voted on the HEROES act but they also voted 217-189 to allow for proxy House votes and remote committee meetings. Mighty productive for a group of bureaucrats who refuse to come in for their day at the office.

The U.S. Constitution doesn’t just disappear because we’re in the midst of a pandemic. Our Founders would be ashamed. https://t.co/y7fVNlERx6

D.C. is under stay-at-home-orders until June 8 but rumors are swirling that the House will stay home now until July. Let’s ponder this all for a bit. While most of us work from home, some of us occasionally have to go in to our offices to work during the week. In some cases, this is the only way to get things get done. In the real world, minus pandemic, if we were to stay home and not work, eventually, we would not get paid. The House still gets paid even though they cannot even schlep their asses in to VOTE! Nancy Pelosi still collects money off of you whether you are working or not. Nancy Pelosi still gets her surgeries and Botox while your elective surgeries are canceled and medical staff that are assigned to work in these medical facilities are being laid off. Nancy Pelosi of The House, with plenty of food in her $24,000 refrigerator, fear-mongers Americans into government assistance and submission, all while she continues to stay home.