Next post
Marilyn Mosby saw her chance and she took it

Yes, it was designed to be provocative. Pamela Geller put on a “Muhammad Cartoon Contest and Art Exhibit” in Garland, Texas on Sunday, with a prize of $10,000 for the winning cartoonist. Geert Wilders, Dutch politician and outspoken anti-jihad advocate was also present to speak and take part.

And then there were gunshots outside, as two men drove up and opened fire. One security guard was wounded. The Garland police opened fire, killing both attackers.

Two suspects pulled up in a vehicle with with explosives, before getting out and firing at the officer, identified in local reports as Bruce Joiner, who was employed by the independent school district. Mr. Joiner was taken to hospital in a stable condition and was released later on Sunday evening.
The pair were then killed by Garland Police officers.
Garland Mayor Douglas Athas told CNN the first suspect was shot immediately while the second was wounded when he reached for his back pack, and then shot again.

The city of Garland’s response was swift and looked to secure the area involved quickly.

And now, the big question is, did the attackers brag about their exploits on Twitter before they attacked?
https://twitter.com/atawaakul/status/595008897334824960
This account has been suspended by Twitter, but clearly, someone is trying to help take credit for the attack. 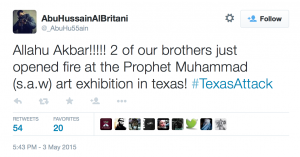 This seems to be Charlie Hebdo all over again. This time, though, the fight was in Texas, and security was already present. You don’t mess with Texas.

While in lockdown, audience breaks into song and prayer. National Anthem an God Bless America pic.twitter.com/ufgR8BOOpr

The only question is how long it will be before a Charlie Hebdo-style attack is successful in the United States?

UPDATE 9:27 AM EDT:
One of the dead suspects has been identified.

One of the suspects in the shooting in Garland, Texas, late Sunday has been identified as Elton Simpson, an Arizona man who was previously the subject of a terror investigation, according to a senior FBI official.

Overnight and today FBI agents and a bomb squad were at Simpson’s home in an apartment complex in north Phoenix where a robot is believed to be conducting an initial search of the apartment.

Officials believe Simpson is the person who sent out several Twitter messages prior to the attack on Sunday, in the last one using the hashtag #TexasAttack about half an hour before the shooting.

The second suspect has not yet been publicly identified, but the Twitter account claiming credit has been tied to ISIS.

Followers of ISIS had been calling for an attack online for more than a week after learning that the competition in Garland would feature a ‘draw Muhammad’ art contest, with a prize of $10,000 for the best caricature.
After the attack, the SITE Intelligence Group reported that an Islamic State fighter claimed on Twitter that the shooting was carried out by two pro-Isis individuals.
In a series of tweets and links, a jihadist named as Abu Hussain AlBritani, which SITE said was British IS fighter Junaid Hussain, claimed that ‘2 of our brothers just opened fire’ at the Prophet Muhammad exhibition in Texas.
‘They Thought They Was Safe In Texas From The Soldiers of The Islamic State,’ added the tweet.

Victory Girls will continue to update this story as new information is released.