Previous post
Milley Proudly Proclaims He Did Call China, So What? 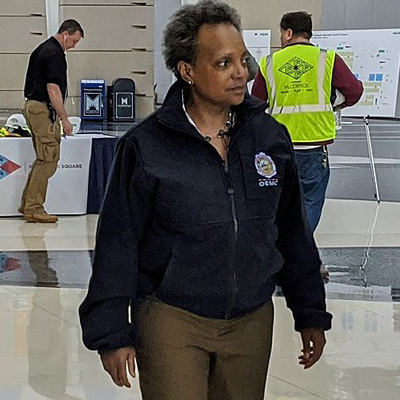 Chicago Mayor Lori Lightfoot has a big crime problem on her hands, which just keeps getting bigger and bigger. So she announced that she plans to sue the street gangs for their assets. Not put their asses in prison, where they belong. She has a different idea.

Her plan is to allow the city to file lawsuits against the gangs, to take their moolah and cars and bling or something. And Lightfoot means business, too.

“To be very blunt and clear, we are going after their blood money – the money they have profited off killing.”

Here’s how one Chicago paramedic — who has taken thousands of gangstas to the emergency room — responded:

“She has no clue. Assets? What assets? A phone, a gold chain, a couple bags of rock, a couple packs of reefer in their pockets? A tiny bag of bullets they sell on the street? The Jordans off their feet? What ‘assets’ is she talking about?”

Is Lightfoot trying to channel the ghost of Eliot Ness, who along with members of the fledgling FBI, took Al Capone down via income tax evasion? She wishes. Actually, this stunt is more akin to that time when Geraldo Rivera opened Al Capone’s vault on live TV and found — nothing.

And Chicago attorneys also believe that this move will go nowhere. Eric H. Sussman, a former federal prosecutor, agreed that going after organized street gangs in federal court has worked. There the individuals involved are older — usually in their 30’s or 40’s. They also move large amounts of drugs.

But what about the Chicago street gangs, of which there are about 100 factions?

“In state court, most of these 15- and 16-year-olds they can’t even identify aren’t even subject to adult criminal prosecution.”

In addition, according to the Chicago Police, these kids also operate a cash business with hand-to-hand transactions. They also go by street names and often don’t even have legal ID on them, or an address. So good luck trying to successfully sue these gangs.

In reality, however, this is Lori Lightfoot playing politics. As Sussman told a CBS reporter in Chicago:

“I think this is clearly a political move in it, and their response to the fact that the city had been unable to articulate a policy to prevent the shootings and the killings that are going on in the city.”

And even a City Council Socialist, Ald. Rosanna Rodriguez Sanchez, recognized Lightfoot’s war on gangs as the PR stunt it really is:

“We believe that the ordinance is just a public relations move right now so they can say they’re doing something about crime.”

In other words, Lightfoot is trying to solve the staggering Chicago crime problem without actually addressing the real source of the problem. And that would be the trifecta of Cook County State’s Attorney Kim Foxx, Cook County Board President Toni Preckwinkle, and Cook County Chief Judge Tim Evans.

All three are progressive social justice Democrats. Kim Foxx, she of the Jussie Smollett caper, is a catch-and-release attorney who drops felony cases in the name of racial equity. Foxx has also benefited from the financial support of George Soros. Plus she’s also the protégé of Preckwinkle, another social justice warrior.

As for Judge Tim Evans — suspects who appear in his court just might get easy bond and electronic monitoring, which the perps easily defeat.

“All Chicago’s institutions are now in perfect alignment with the progressive agenda, unwilling to tolerate dissent and all too eager to place their droning, witless ideology on any dark reality, in defiance of human decency.”

But what about Chicago’s residents? So why don’t they demand change?

They never do, however. Kim Foxx, for example, ran for re-election in November of last year and soundly defeated her opponent, despite the shootings and mayhem on Chicago’s streets. That’s because residents of Chicago adhere more to the D after a candidate’s name than they do to their own well-being.

The situation in Chicago reminds me of a scene from one of my favorite movies, A Christmas Story. Follow me here.

Remember the scene in which Flick touched his tongue to the frozen flagpole and found he was stuck? All the other kids stood around in shock. But then the bell rang, and the kids obediently ran back into the school, while Flick cried and pleaded for help.

“But the bell rang!”

Think of Flick as Chicago — unable to free itself from gangs and murder and mayhem. Of course the residents want change. But then the Democratic bell rings and Chicagoans obediently fall into line and vote for the candidate’s name with the big D.

But you’ll also remember how Flick finally got freed from the flagpole: through the help of fire fighters and police. And so it is that the only thing that just might save Chicago from its gangs is support for its first responders, the same people whom Kim Foxx despises and whose hands Lori Lightfoot ties.