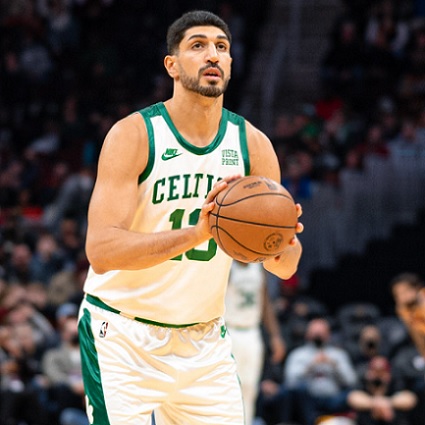 Today is a very special day for NBA player Enes Kanter, who has made himself the conscience of the NBA. Today, Kanter, who was a citizen of Turkey, will become an American citizen.

And not only will Enes Kanter become an American citizen, he is giving himself a new last name. FREEDOM. Yes, as of today, Enes Kanter will legally change his name to Enes Kanter Freedom. His Twitter account has already made the switch. “Kanter” will now be his legal middle name.

“Kanter's manager, Hank Fetic, told the Associated Press that Kanter will have his citizenship oath ceremony on Monday afternoon and at the same time will complete his legal name change.”
Congratulations @EnesFreedom (who I see has already changed his handle here!)! https://t.co/AKbRpHeQmS

We have written about the amazing story of Enes Kanter Freedom before. His outspokenness against the dictatorship of Recep Tayyip Erdogan has led to him having his Turkish passport revoked, charges against him in Turkey with an arrest warrant issued, and imprisonment for his father (who was eventually released earlier this year). His advocacy for the freedom of Uyghur Muslims in China as a fellow Muslim, his calling out of Xi Jingping for the oppression of Tibet and Hong Kong, and his championing of Chinese tennis player Peng Shuai have made him a likely target in China now, where the NBA is desperate to keep the Chinese yuan flowing.

And now he is going to be the best kind of American citizen: the kind that understands and values the freedom that America gives. And he believes in that freedom SO MUCH that he is changing his own name to reflect that. Just watch this interview with him. If it doesn’t stir your heart and make you proud to live in a country that can give this man freedom, I don’t know what to tell you.

In an interview with CNN, Mr Kanter, who plays with the Boston Celtics, said the name change will reflect his “fight” for freedom throughout his life.”

In his remarks, Mr Kanter said that “freedom is the greatest thing a human being can have”.

“That’s why I wanted to make that word a part of me, and carry it wherever I go,” he added.”

Mr Kanter’s manager told the AP news agency that the name change will take place at the same time as his naturalisation ceremony on Monday.”

The name ‘Freedom’ will be on his jersey when the Celtics face off against the Philadelphia 76er later this week. Mr Kanter has said his teammates already call him by that name.”

Just imagine what it will be like in every single game he plays in from now on. Remember when the NBA allowed players to “personalize” their jerseys with social justice slogans during the 2020 season? Well, now Enes Kanter Freedom will have “FREEDOM” permanently across his back, and with everything he does on the court, Freedom will be the name he goes by. If only some players had still insisted on keeping their virtue signaling names on their jerseys. It would have been hilarious and amazing to hear the play-by-play of “Freedom blocks the shot by I Can’t Breathe.” Just even thinking about it should make you laugh.

Today, Enes Kanter Freedom becomes one of us, because he loves this country and the freedom it has given him. We should all congratulate him.

.@EnesFreedom embodies many of the values that make our nation great. He knows the importance of freedom and is courageous about speaking up for it. Today, he becomes an American citizen. Congratulations!

This is the kind of American we want in this country. And his advocacy for freedom is not going to stop now.

NBA Player Enes Kanter: "We need to call out these companies. Nike, the biggest sponsor of NBA. In America, they stand with Black Lives Matter, Latino community, No Asian Hate, and the LGBTQ community, but when it comes to China, they remain silent." pic.twitter.com/xhbFQDBiAs

Congratulations to Enes Kanter Freedom, and welcome to your new home country. You fit in well already. And I predict his new jersey will be a best seller.