Previous post
Biden Stumps For McAuliffe, Has Trump On The Brain 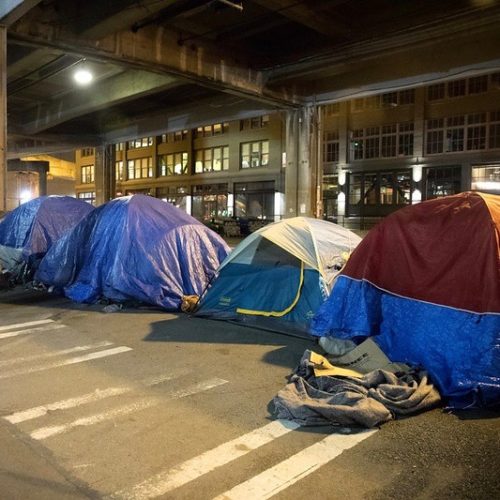 Mayor Jenny Durkan’s Seattle is a hot mess. Drive up the 5 and you would see for yourself. After the 2020 Summer of Love and thugs coming to visit her in her backyard, Mayor Durkan has had some time to reflect on reimagining the police force.

Oh, boy. Reimagining. At least, that’s what Seattle’s KING 5 News said. What is she reimagining with? A new emergency response team called Triage One.

The proposal involves building a new emergency response team called Triage One as well as update dispatch protocols and expand the community service officer program.
The city said the idea for this team is based on data from 911 calls and come in light of the current hiring challenges the Seattle Police Department (SPD) is facing.”-Cody Miller, KING 5 News

Challenges hiring police officers? Say it isn’t so! Why would someone put his or her life on the line trying to protect a bunch of ingrates who stormed one of their precincts and want to defund their department? Life’s too short for that pile of bull manure. One can only utter “defund the police” and “pigs in bacon” so much. One can only be stand by and not do their jobs (because they face discipline if they do) so much. One could only be called a bigoted racist so much. At this time, over 200 sworn police officers have quit SPD thanks to Seattle City Council and Jenny Durkan’s feckless leadership. Bring on the social workers! An escalation in gun violence to crisis levels, you say? Pfft. Jenny’s got this under control.

The Regional Peacekeepers Collective? Jenny, FFS, can we please leave the 60s behind? Wake up and smell the ganja and the patchouli, girl. Your city is a wreck.

We know that violence is a result of so many failed systems, and because government for so long has shirked its responsibility, we are called at this time to make investments into healthier, safer communities.” –Jenny Durkan

So many failed systems that you and your constituents have either been a part of creating or willfully ignoring as the crisis escalated in your city? So many failed systems. See exhibits 1, 2 and 3 up the west coast. San Francisco, Portland and yes, SEATTLE. Dow Constantine does not get a pass here, either.

It boggles my mind that Seattle keeps electing the same incompetent leaders as these problems have continued to get worse and then expect different results.

Jenny Durkan called the rock-throwing and subsequent clean-ups of homeless encampments off of I-90 in Seattle, “complicated“. She also pointed fingers at WSDOT. So, let’s follow this for a second here. Washington State Department of Transportation is responsible for clearing and policing homeless encampments alongside the freeways now?

The reality is, there’s a conflict-avoidant tendency in Seattle’s municipal leadership. It’s far less costly to simply go along with the fiction that these unsanctioned encampments pose little safety risk and that allowing them to set up wherever they’d like on public property is the ‘compassionate’ thing to do.”-stevemurch.com

Imagine, Jenny. It’s easy if you try. And while Durkan “reimagines” from her mansion, the streets of Seattle are continuously plagued by mentally-ill, drug-addled individuals with no desire to get help. They will continue to throw rocks off the overpasses and set fires alongside the freeways because they can. They will continue to camp out and leave dirty syringes and their trash on school grounds. They will continue to break into people’s homes and cars. They will continue to steal from stores in downtown Seattle and the police officers who have remained on the job will do nothing because “compassion” and because they were threatened with discipline if they did do something. What’s next? Glad you’ve asked. Take a trip into Seattle. You may find your (stolen) goods sold for a steal at a street-side homeless bazaar. No joke. Venture in, if you dare. Be sure to wear some flowers in your hair and admire the pretty sidewalk chalk art. You may be lucky enough to not get blindsided by a “highway resident” hopped up on crack and whatever else hurling boulders on I-90.

Nearly 150 Seattle businesses in Seattle's core shuttered last year. But as the economy recovers, residents have a new retail outlet to buy clothes & alcohol: an illegal bazaar mostly for the homeless. I discussed it on #TuckerCarlson with @MarkSteynOnline. pic.twitter.com/DPsK0t9NJR

Triage One, Mayor Durkan? Peacekeepers?! The City of Seattle is beyond the triage state. We’re talking a direct trip to the Emergency room-STAT. But, we dumbasses know it’s more, um, “complicated” and nuanced. Right, Jenny? So, go ahead and reimagine something far-out for your city. We’re sure the Peacekeepers Collective will be groovetastic, baby!