Next post
DOJ Employees Want Leave for Out of State Abortions 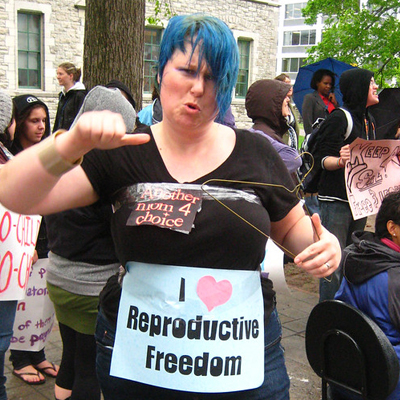 The leaks just keep on coming. Now there’s another leak, this time from the Department of Homeland Security. A DHS memo, reports Axios, shows that the department is preparing for violence after the Supreme Court rules on Roe v. Wade. And with the feckless Alejandro Mayorkas in charge, what could possibly go wrong?

According to the memo, the Department is expecting the Supreme Court to overturn Roe v. Wade. Axios reports:

“Law enforcement agencies are investigating social-media threats to burn down or storm the Supreme Court building and murder justices and their clerks, as well as attacks targeting places of worship and abortion clinics.”

“The unclassified May 13 memo by DHS’ intelligence arm says threats that followed the leak of a draft opinion — targeting Supreme Court Justices, lawmakers and other public officials, as well as clergy and health care providers — “are likely to persist and may increase leading up to and following the issuing of the Court’s official ruling.”

Well, no shit, Sherlock. Pro-abortion demonstrators have been gathering outside the private homes of Justices Samuel Alito, Brett Kavanaugh and Amy Coney Barrett, as well as the home of Chief Justice John Roberts. These have been continuing despite the fact that such demonstrations are illegal.

But since when has that mattered to the current DHS? Secretary of Homeland Security Alejandro Mayorkas and Attorney General Merrick Garland worry more about white supremacists they think are causing nationwide mayhem and chaos.

So the leaked memo says this:

“Some racially or ethnically motivated violent extremists’ embrace of pro-life narratives may be linked to the perception of wanting to ‘save white children’ and ‘fight white genocide.'”

And, of course, Axios brought up Buffalo, citing Jonathan Wackrow, a risk management consultant and a former special agent with the U.S. Secret Service, who said:

“The attack in Buffalo actually has a measured impact on this Roe decision and how people will will react to it.”

Because for these clowns everything is racist.

You can read the leaked DHS memo here.

Any Violence Will Come From the Left

The notion that racist violence will come from the pro-life side is laughable, at best, insulting at worst. Other than those times when drunk fans vandalize their city after their team has won a championship — who burns down buildings and hurts people if they won their cause? It doesn’t make any sense.

The loons who will riot after the SCOTUS decision will come from the Left — I guaran-damn-tee it.

Take, for example, this social media announcement for an upcoming protest in the San Francisco Bay area. It has a raised power fist, which is not a peaceful symbol.

Join the protest for Roe vs Wade this Saturday in San Ramon at Coyote Crossing Park at 3:00 PM! If you have any questions or are interested in coming, please DM us or @anaya_sayal on instagram!! pic.twitter.com/uJ7L3bn0wD

Then there are the people who insist that women are gonna die! if SCOTUS overturns Roe v. Wade. And Alito will have blood on his hands!

After all, the British Lancet says so, and such Brits are experts on American constitutional law.

Oh wow. The Lancet — one of the most prestigious medical journals in the world — is out with a forceful statement about Roe v. Wade *on the cover*. pic.twitter.com/foqLq4DWic

And there are the batshit crazies, like this one I saw in Washington, DC, last week, picketing outside the Supreme Court building. The sign holder thinks that overturning Roe v. Wade could make miscarriages illegal. 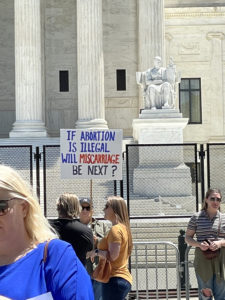 So what evidence does the DHS have that pro-life people might cause violence? This single incident of a Planned Parenthood clinic receiving a cyberattack in October, 2021:

“In October of 2021, a Planned Parenthood facility in Los Angeles was the victim of a cyber attack. Patient information included names, dates of birth, addresses, insurance identiﬁcation numbers, clinical data, diagnoses, treatments provided and prescription information were stolen. Similar attacks could occur due to heightened tensions.”

That’s all they’ve got.

DHS Memo Bows to the Left

Look at what the DHS memo lists as possible threats: burning down the Supreme Court building, murdering justices and their clerks, targeting places of worship. That’s all stuff the Left is threatening. Yet the DHS throws in the possibility that maybe, just maybe, a pro-life activist might celebrate victory by attacking a Planned Parenthood clinic. Sure, Jan.

To paraphrase a popular cat meme I’ve seen at Facebook: The chances of an attack by a pro-life activist after Roe is overturned is low, but never zero. Such is the thinking of the DHS.

But Mayorkas, Garland, and the dunderheads who make up this administration know that they derive their power from the hard Left. So they throw them a sop by accusing white people and conservatives of potential violence.

As a commenter at Red State said regarding the leaked DHS memo:

“The only cheap fuel available these days is the stuff the gaslighters are using to spin the narrative.”