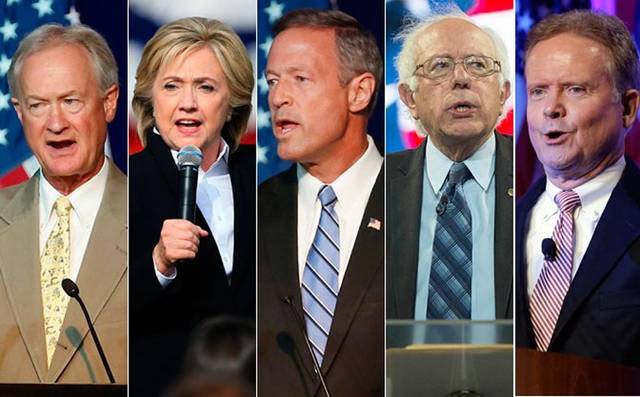 by Marybeth Glenn in Headlines 10 Comments

Many of us here at Victory Girls watched the debate for you, just in case you were busy… Like if you had paint to watch dry or laundry to fold, we had you covered. As the supposed party of youth and diversity ushered out their old white candidates, I found myself hating them for making me miss Joe Biden. So here’s my recap of the debate between Hillary Clinton, Bernie Sanders, and those three other guys who never had a chance to begin with. I’ve decided to play by liberal rules, so we won’t have a winner or a loser, I’ll just be handing out participation trophies. A lot of them.

Lincoln began with an introduction that read like a resume, which is par for the course. He spoke on the need to address climate change, and prosperity through peace. “I want to end these wars.” Unfortunately, those who decapitate Christians, purchase women to use as sex slaves, and plan suicide bombings in their spare time, don’t feel the same way. He noted that even though he’s hopped party lines, the Republicans left him, his stance on the issues never changed.

CHAFEE: Anderson, you’re looking at a block of granite when it comes to the issues.

However, when Cooper asked Chafee about a yay vote in 1999 that made banks bigger and stronger, his tune changed. After blaming his mistake on being a newbie in the senate, he said Cooper was being a little rough on him.

I could say more about Lincoln Chafee, but to be honest, everything else he said was so boring that I played Angry Birds whenever he was talking. I award Chafee 16 participation trophies out of pity, mostly because he still came back to the stage after the bathroom break.

O’Malley, at 52 years-old, was the youngest on the debate stage last night. We knew he was toast after having the audacity to say that “all lives matter,” but as of last night, the only thing the people know about him is how much the NRA loathes the former Governor of Maryland. However, my favorite moment of the night was when O’Malley said that Assad’s invasion of Syria will be seen as a blunder. Not simply because Syria’s President, Bashar al-Assad, didn’t invade his own country, but because not one Democrat/Democrat Socialist on the stage called him out on such a blunder.

O’Malley noted that on Tuesday night you didn’t hear anyone on the Democrat stage denigrate women. No, we heard them treat us as though we’re too ignorant to research a false inequality narrative derived from faulty data and sold en masse by manipulators, and too ignorant to see through their “war on women” propaganda. No, O’Malley, I didn’t hear anyone directly denigrate women, they just treated us like we were morons.

Jim Webb, the only person to say that he wouldn’t hand out executive orders like water at a marathon, but instead work with Congress. This, ladies and gentlemen, makes him a moderate in the Democrat party; which says a lot about the Democrat party. The former Senator from Virginia focused on his hatred of money in politics, his time in the Vietnam war as a marine, and on standing out as a moderate who is willing to work with those across the aisle. He also noted that the average American does not have a bodyguard, and should be allowed to carry a weapon. Of course, this made him a target for liberals.

Clearly Webb isn’t going to get support from Conservatives since he still holds adamantly leftist views, and clearly he’s not going to gain support from irrational liberals (redundant, I know), so I put his chances of being the nominee at roughly 0.00000004%. He’s a middle of the line progressive running in a race that is focused on who can sell the most socialism without catching up to Bernie Sanders – Webb is doomed to fail. However, I award him 55 participation trophies because he’s a marine, a veteran, and has done more for our country than anyone else on that stage.

Time to play the game “Who Said That Quote? Bernie Sanders, Lenin, or Marx?”:

“Workers of the world unite; you have nothing to lose but your chains.”

“The rich will do anything for the poor but get off their backs.”

“Freedom in capitalist society always remains about the same as it was in ancient Greek republics: Freedom for slave owners.”

Bernie was handing out rainbows, lolly-pops, and adorable unicorns to anyone who tuned in last night. Education? It’s a right! Healthcare? It’s a right! He was channeling Oprah, “You get a free degree, you get a free degree, you all get a free degree!” People who love him see the happy picture flowing from his lips, but they don’t see the brutal way in which socialist policies are forced onto the people; to be fair, there aren’t many socialists who broadcast that horrible, unapologetic, grotesque side of their stance. Never has any form of socialism ended well. Never. Rand Paul put things in perspective rather nicely:

“So I think it’s really important that people understand that there is no free lunch when Bernie offers you something for free. He’s going to take it from somebody else first and then all they’re doing is obscuring who pays for it, but ultimately somebody has to pay for things. And so if you want free college for those that go to college, those that don’t go to college and work will be paying for your college. So nothing’s really on the surface. What appears to be free isn’t free,” Paul said.

Bernie has once again reminded us that socialism is not sexy, that using the government to force your agenda is not hip, and that a belief system guilty of taking millions and millions of lives is not even close to a sane choice. Bernie went after the evil NRA while embracing the label of “socialist,” which is a sad reflection of his skewed views, since disarming a populous and forcing an agenda is the Utopian paradise every socialist sells.

I’ve long been a fan of Oleg Atbashian, who was raised – and finally escaped – the old Soviet Union. He is now a voice of reason in a country plagued by the “fairness” doctrines of the left, and whispers of a paradise that doesn’t exist. I love his quote here:

“If some people had wings and others didn’t, and the government wanted to enforce “fairness,” soon no one would have wings. Because wings cannot be redistributed, they can only be broken. Likewise, a government edict cannot make people smarter or more capable, but it can impede the growth of those with the potential. Wouldn’t it be fair if, in the name of equality, we scar the beautiful, cripple the athletes, lobotomize the scientists, blind the artists, and sever the hands of the musicians? Why not?”

In the end, we learned that Bernie can shout, and his people will watch on with their rose colored glasses. Of course he wasn’t grilled on why he, despite all historical evidence to the contrary, can make socialist policies work in the United States, but we expected that.

Bernie once again mentioned Denmark, singing their praises and accomplishments for the working people. I must ask, has Bernie done any research on this Nordic country since the 1970s? They’ve rejected their previous socialistic approaches and now lean a little more capitalist than the United States. As National Review points out here, Denmark is far from the socialist paradise Bernie wants it to be, and the part that is – higher taxes on the middle class – wouldn’t be a great selling point here in the U.S. of A.

Its corporate-income tax is much lower than that of the United States. Its regulatory environment is in many ways more free. It is very free-trade oriented.

I award Bernie 576 socialist red bedazzled butterflies, because they’re as real as the additional $18 trillion we’d need for his new spending proposals. I also award him 5 1/2 participation trophies for bringing up the income inequality lies, but only because it helped me win DemDebate bingo.

Last night’s debate clearly showed Hillary to be the queen of debate that she is. She may sound like a robot, she may lie through her teeth, but she handles herself well in a debate. From using her support of Planned Parenthood to her advantage with an ignorant faction of the country who believe butchered children is acceptable, to taking advantage of weak points in the other candidates, she did better than many thought she would do. Just as the devil knows the bible more than any human, Hillary knows how to play her admirers better than anyone else. And with the help of Bernie, she reignited the “witch hunt” narrative regarding her email scandal, watch below:

That was about as awkward and disturbing as watching a Honey Boo Boo wedding special.

However, her greatest weakness of the night had to be when she called Republicans her “enemy.” This opens up a vast number of attack methods come the general, that is if she isn’t behind bars by then. She’s shown that she has no regard for the thoughts of conservative citizens, but has gone a step further by labeling us an “enemy.” Hillary’s greatest asset in the race is that she’s a woman, and she made that clear. If she can get enough women to feel like victims, and enough people to see how boring her opponents are, she thinks she can get enough people to vote her onto the ballot; sadly, she’s not that far off. I must give her props, however, for being one of two democrats on stage with a body count. That has to count for something, right, Ghost of Ted Kennedy?

That said, I award her zero participation trophies because she’s a criminal.

No, he wasn’t there, but in being fair and liberal it would be wrong for me not to award someone who did absolutely nothing. I award Joe 2000 participation trophies for making me stay on the channel in hopes that he would at some point rise from beneath the stage in a cloud of fog while sniffing scented markers.

So there you have it! If you made it this far, I thank you for tuning in for my recap. See you next time!