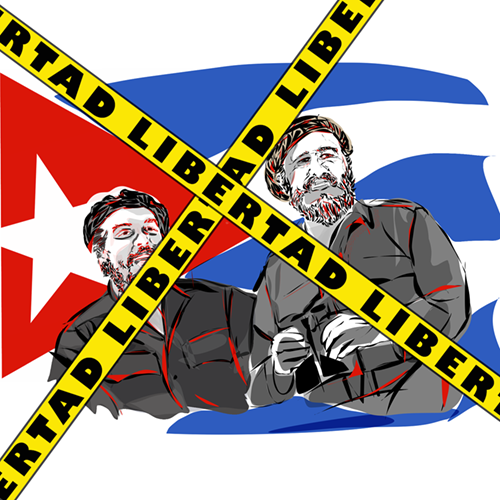 Cuban protestors have taken to the streets. They’ve had enough and want to let the world know. Which would be great if the Cuban government and social media wasn’t conspiring against them.

Shouting “Freedom” and other anti-government slogans, hundreds of Cubans took to the streets in cities around the country on Sunday to protest food and medicine shortages, in a remarkable eruption of discontent not seen in nearly 30 years.

Hundreds of people marched through San Antonio de los Baños, southwest of Havana, with videos streaming live on Facebook for nearly an hour before they suddenly disappeared. As the afternoon wore on, other videos appeared from demonstrations elsewhere, including Palma Soriano, in the country’s southeast. Hundreds of people also gathered in Havana, where a heavy police presence preceded their arrival.

Now why would Facebook shut down videos of the protests? People in Cuba have been living under a communist dictatorship for decades. One would think that protests from people who are talking about issues with food shortages, medicine and healthcare issues, lack of freedom, and government incompetence would be applauded across social media for days…right?

Evidently social media, AND the media, are more than happy to comply with the Cuban government instead of helping the Cuban people protest against their dictatorial overlords.

Videos of protests are being shut down within minutes and hours of their airing. What does the Cuban government want to hide? Why is social media censoring the voices of the Cuban people?

Well, the short answer is, social media has gotten used to caving to the demands of dictators – hello CHINA! – so this is nothing new and shouldn’t surprise us.

Meanwhile, the media is spinning these Cuban protests as something solely about Covid and vaccines. That is far from the truth.

Many Cuban Americans are rallying in support of the Cuban protestors.

In a statement, Rep. Mario Diaz-Balart called for U.S. to rise up in support of the island nation.

“Now more than ever, the United States and the international community must support the Cuban people in their struggle for freedom. The humanitarian crisis Cuba faces right now is yet another symptom of the incompetence and absolute cruelty of the Cuban tyranny,” he said. “We know what freedom means for the Cuban people, and now, while the regime uses savage violence against the people peacefully demonstrating in the streets, the world has the obligation to stand with the brave Cuban people.”

Marco Rubio, Ted Cruz, and many many more Cuban Americans along with politicians such as Rick Scott and Kristi Noem are taking to social media to express their support for the Cuban people.

Meanwhile others are minimizing the issues of what the Cubans have been dealing with.

This (very small) protest in Cuba is part of another US-backed astroturfed "color revolution" (read: regime-change) attempt, led by right-wing activists funded by the US government through CIA cutouts.

I’ll be blunt. That Norton guy is a jackass. Sadly and infuriatingly, there are far too many responses to his tweet who agree with him.

To which I say, cool! Go live in Cuba if you are so willing to defend the GOVERNMENT against its citizens. If YOU think the Cuban government is so great and wonderful, and those protestors are just totally misguided, then you just need to pack up your bags and move there. Go for it. I. Dare. You.

As for social media and its willingness to go to bat for Communists and dictators?

Ummm actually no, Twitter, that’s not in fact what is taking place in Cuba right now. #SOSCuba pic.twitter.com/0TpObnP2p9

The Cuban protests are because of lack of food, water, electricity, medicine (I’m not talking about the Covid vaccines), and so much more that has left the Cuban population without the ability to maintain even a marginally decent quality of life.

Where is Amnesty International on this? Oh yeah, never mind.

Cuban politicians got into the game of gaslighting the protestors and those watching from around the world.

The Cuban president is blaming Americans while our State Department issues a weak sauce cheer for the protestors.

In response to the protests, President Miguel Díaz-Canel accused the “Cuban-American mafia” of “creating a whole campaign” and encouraging “demonstrations across the country.” U.S. officials are watching the situation closely, with Julie Chung, acting assistant secretary of state for Western Hemisphere affairs, praising the demonstrators on Twitter, saying they were exercising their right “to peaceful assembly to express concern about rising COVID cases/deaths & medicine shortages. We commend the numerous efforts of the Cuban people mobilizing donations to help neighbors in need.”

No they’re chanting LIBERTAD. Stop playing cover for communists and support the Cuban people. My god. Why is that so hard for you. https://t.co/gdJ3dC9SOl

I'll never forget those protests against the German Measles pic.twitter.com/tRDUHJMQm5

Isn’t it wonderful that the State Department and the Biden Administration are phoning it in?

This is about Cubans who have had ENOUGH. They’ve watched the world this last 1 1/2 years. They no longer want a government who puts the screws to them every time someone sneezes in the government’s general direction. Instead, they want FREEDOM.

The Obama Administration did Cubans a great disservice by kissing up to Castro, and now we are seeing the results of that politically awful move.

But don’t tell social media that. Those Cuban protestors are just pests according to Cuba’s government and social media runs to comply, while the Biden Administration says “there there kiddies.”