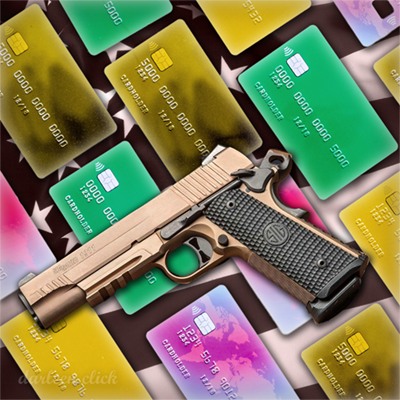 Credit card companies will now have a specific merchant code for any purchase made at a gun store.

If you buy a gun with plastic, your credit card company is going to know about it.

As obvious as that sounds, it wasn’t until this weekend that the big three credit card companies — Visa, Mastercard and American Express — agreed to adopt a new merchant code that specifically carves out gun sales from the “general merchandise” category.

Other types of purchases, everything from plumbing equipment to florist supplies, already have their own codes. But this one’s been years in the making.

“The creation of [a] new merchant category code for firearms is a major step forward that will help give law enforcement the tools they need to stop a tragedy before it happens,” New York Gov. Kathy Hochul said in a statement released by Amalgamated Bank on Friday. “I’m grateful to the business leaders who stepped up and joined the fight to protect public safety — here in New York and across the nation.”

Of course, the anti-gun lobby is dancing a jig over this. Using the ‘everything else you purchase has a merchant code, so this is no big deal’ gambit is quite telling. If you look through the entire list of current merchant codes, one will see that STORES are listed. In fact, even sporting goods stores such as Cabela’s or Scheels already have their own category. But what the credit card companies are doing now is a SEPARATE code for actual gun and ammunition purchases.

Supposedly this will be THE MAGIC BULLET that will stop that next mass shooter from killing people. Knowing your purchases are tracked, all future shootings of any kind will magically disappear.

“By creating a new MCC for gun and ammunition retailers, credit card companies and financial institutions can better monitor suspicious activity, like straw purchases, and, in turn, help save lives,” said Representative Dean. “Our nation’s gun crisis requires all of us to act, and I urge companies like MasterCard, American Express, and Visa to support Amalgamated Bank’s request for this code.”

I have a feeling that credit cards are not often used in illegal gun sales https://t.co/ONli39JktK

Exactly. How many shootings in Chicago are with legally purchased weapons? Very few if any.

What does this mean for all the civilians who are buying more guns and ammunition than ever because their cities and neighborhoods are no longer safe due to Democrat ‘appease the criminal’ policies? This survey, finalized last year, is highly illuminating.

“Given that 31.1% of firearms owners have used a firearm in self-defense, this implies that approximately 25.3 million adult Americans have defended themselves with a firearm,” English wrote in a preprint report on the study published on the Social Science Research Network (SSRN). “Answers to the frequency question suggest that these gun owners have been involved in a total of approximately 50 million defensive incidents. Assuming that defensive uses of firearms are distributed roughly equally across years, this suggests at least 1.67 million defensive uses of firearms per year in which firearms owners have defended themselves or their property through the discharge, display, or mention of a firearm (excluding military service, police work, or work as a security guard).”

As the survey also points out, that doesn’t mean someone actually fired their weapon in every single instance. For many, just the mention of their weapon or the showing of it defused the situation.

Since mid-2020 people all over the country became first time buyers of guns and ammunition. That trend has continued. Why? Because of months of riots. Because of cities such as San Francisco, Los Angeles, Denver, Chicago, Philadelphia, New York City and other Democrat-run cities are letting criminals walk, no matter the crime that was committed.

People don’t feel safe. They are using their Second Amendment right to protect themselves. Firearms training and concealed carry classes are full within minutes of schedules being posted. Stores have had a very difficult time keeping both weapons and ammunition on the shelves these last two years due to the rampant crime and the woke policies of activist district attorneys.

A new merchant code that tracks gun and ammo purchases won’t stop the next mass shooting. But it will supposedly facilitate the collection of data to identify future domestic terrorism extremist threats.

Professor Jacobsen sums it up perfectly.

There is a thin line in society, between food and anarchy, freedom and repression, liberty and tyranny, safety and street violence. It’s thinner than we want to admit, and it’s being pushed to its limits on purpose by ideologies that want to deconstruct our society. Tearing down society is a dangerous game.

This move by the credit card companies is yet another tear in the fabric of our Constitutional Republic.