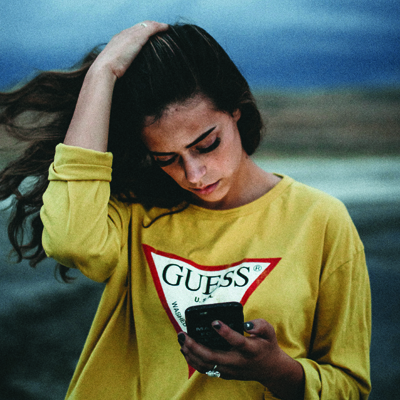 Suzy Weiss is a 27-year-old journalist who is bright, thoughtful, and very lonely. She’s also wondering why Tinder and other apps like it have failed members of her generation.

Writing at her older sister Bari’s Substack “Common Sense,” Suzy claims in an article called “Generation Swipe,” that “Tinder promised it would revolutionize romance.” So far, however, it appears to have failed not only her, but her peers as well. And she wonders why.

Part of the problem can be found in the first paragraph, however:

“Every generation thinks they have it the hardest when it comes to finding love, but it’s hard to look at mine and conclude that we don’t have a good case. Never before have young people been having so little sex …”

Perhaps it’s because she and her generation equate sex with love. They’ve bought into the lie that lots of sex brings happiness, that women can enjoy carnal pleasures like men, and that this is how to find your soulmate.

My mother’s generation, however, believed that good girls don’t, and while bad girls seem to have all the fun, men want to marry good girls. Trouble is, however, that now lots of men don’t want to get married. And some, notes Weiss, don’t even want to have sex, believe it or not:

“By the time my parents were my age, so the meme goes, they had a house and two kids. A lot of men in my generation aren’t even having sex.” 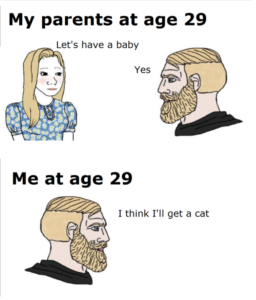 But Tinder was supposed to be this magic that would bring young adults together. What happened?

Finding Whom to Blame

Weiss writes there are many culprits to blame for her generation’s predicament: she first points her finger at Mark Zuckerberg and Steve Jobs — which is odd, considering that Jobs died before dating apps became big. And then there’s “the sexual revolution and the pill and late empire and late capitalism and Tinder.”

But she places the biggest blame just like every younger generation does: at the feet of the parents. As the pop song “The Living Years” begins, Every generation blames the one before. Ironically, the British band Mike + the Mechanics recorded it in 1988 — before Suzy Weiss was even born.

Weiss says that these “snowplow” parents failed to teach their children to be resilient:

“When you’re raised in a world perpetually protected from skinned knees, you tend to be scared of running fast.”

And then there’s the stridency of the #MeToo movement, which a Pew study found to have negatively affected the way young men interact with women. Weiss writes:

But Tinder and similar apps were supposed to solve all that, right? Swipe right, swipe left, lots of single men and women from which to choose. Plus, you get to communicate with someone before you even meet in person.

Sounds good in theory, but in reality it’s loaded with pitfalls. Canadian psychologist Jordan Peterson called Tinder a “fire starter” and strongly advised against using such apps. Not only do they encourage predatory men, and put women at risk but — surprise, surprise! the app creators have designed them to keep users coming back for more.

“Even if there’s still a lid to every pot, the reality is that some are getting thrown into the discount bin, while others are being marked up and set on the highest shelf. And the discounted ones know who they are. “Everyone says ‘Oh, a woman wants a tall guy.’” says Jeff, who is five-foot-four. “But I can’t do anything about that. I can’t make myself taller. It is what it is.”

Yet the hopeful keep returning without realizing that Tinder is a trap. Because if it works so well, then users wouldn’t need to keep returning, right?

Comments flowed in to Suzy Weiss’s article, many from older adults who simply advised people to get off the screens, dump Tinder, and just get out into the world.

Like a 59-year-old father who’s been married for 30 years:

“Get out there, and meet people. Some people stink, some are great!! …”

“My advice – get off the phones, and go make some mistakes with real people. Correcting the mistakes is part of the fun, and people will respect you in REAL life.”

Yet another man noted that Suzy Weiss didn’t mention the word “marriage” once in the entire article, while another woman agreed with that observation and added:

“Yeah, in Suzy’s last paragraph, she equated dating for him, “trying to get someone to like you, to sleep with you” — and *then*, “to be your girlfriend”— umm…”

There were those who praised the old tradition of chastity before marriage:

“My wife of eighteen years married me without that check of “basic compatibility.” “Chastity until marriage, fidelity until death” can WORK.”

“It certainly worked for my parents and most in their generation. The complete opposite seems not to be working…”

Ya think? Feminism, the sexual revolution, hookup culture — things I wrote about last month — have not provided the liberation they advertised.

Want to Meet Your Soulmate? Get Thee To a Church!

In addition to common sense counsel to get off the Tinder app and the screens, many commenters simply advised: Go back to church!

“To women who complain about not being able to meet a guy: As you sow, so shall you reap. To men: Join a church.”

“My church has a number of women in their 20s and 30s. They apparently know it’s a good place to find a decent, responsible man.”

“My wife introduced a couple at our synagogue one Shabbat morning. That turned into a very successful relationship.”

Not every successful marriage starts in a house of worship, of course — I know strong couples who met in bars. But Tinder and the hookup culture it promotes will not save the internet generation from loneliness. They need to delete the apps, put the damn phone down, stop living in fear of rejection, and get out. We old married folks have been there, done that, and happily survived.

Featured image: Photo by Jake Pierrelee on Unsplash/cropped/free for use.