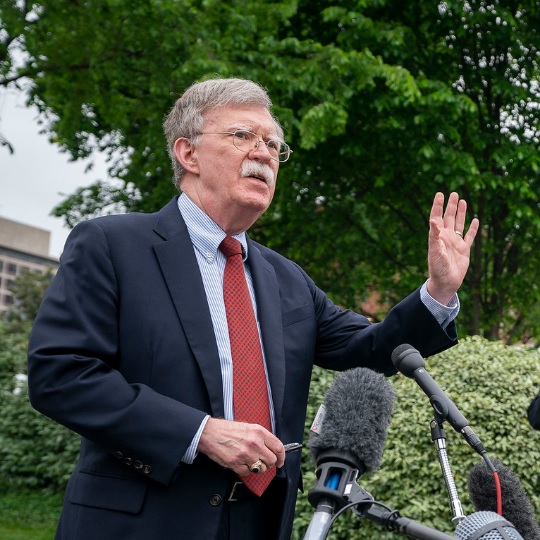 Whether than book actually gets to the bookshelves on Tuesday is an open question, as the Department of Justice is currently suing to have the book pulled due to classified information. Bolton claims in the interview that the book has been vetted thoroughly, and that the only reason that President Trump doesn’t want it published is because the book would be politically embarrassing. That may be so, but we’ll see what the courts have to say.

Regardless, nothing was stopping Bolton from giving his own opinion publicly. The transcript of the interview can be read here, but I’m going to break down the interview into three categories: Bolton’s impressions of Trump, foreign policy issues, and impeachment.

What Bolton says about Trump as a president

John Bolton, who supported Donald Trump for president over Hillary Clinton, spent 17 months as Trump’s national security advisor. It’s clear that he thought that Trump, once elected, would be the kind of president that the deep state was used to. How no one in the deep state thought that candidate Trump would be all that different from President Trump, I have zero idea. Anyone who watched Trump build his reality TV empire knew exactly what kind of personality Trump was. But given the choice between Trump and Hillary Clinton, there wasn’t much of an option. Bolton seemed to believe, like the girlfriend who marries the “bad boy” because she thinks she can reform him, that once Trump was in the Oval Office, he would start behaving like a “proper” president.

BOLTON: Well, I could see even before my first day, when I would go over to talk to Trump and others that this was not like a White House I had ever seen before. It was not functioning in the same way as any of the three previous presidents I had worked for.”

BOLTON: Well, my experience was he very rarely read much. The intelligence briefings took place perhaps once or twice a week… It’s very unusual. They should take place every day. The president should read extensively the material he’s given. It’s not clear to me that he read much of anything. I think too many people attended the briefings. There were perhaps eight, ten people in the room most times.”

RADDATZ: And you wrote the president was not just uninformed, but stunningly uninformed. Can you give us some examples?”

BOLTON: Well, there are parts of history that you would expect a president to learn over time. No, no president comes to office with 360 degrees knowledge of every aspect of our affairs. But there were things that we went over again and again and again, that just didn’t seem to sink in, like why was the Korean peninsula partitioned in 1945 at the end of World War II, and what did that lead to and how did we get to that point? There are just bits of history that help to inform the current context of a lot of situations. And we just never made headway on many of them.”

So, here lies a major problem – the disconnect between Trump and the Republican political “elite.” After eight years out of the White House, the GOP had gotten used to having the moral high ground and nothing else. Trump came out swinging in the primary, egged on by a media that thought he was a joke, and then he promptly upended the entire American political class by winning. There is a rational debate to be had, later, on whether Trump is tempermentally suited to the job of president because of all the fine-detail minutiae that is involved on a much larger scale than being a CEO. But the electorate, in 2016, was fed up with the glossy, soft-focused, fawning coverage given to President Obama, and then to Hillary Clinton, and their seemingly unlimited pass on corruption that would have taken out a Republican administration in a heartbeat. Donald Trump, though he may not have realized it, was the public’s response to both political and media failures. The Republican political “elite” thought they would be able to make Trump over into the kind of president they thought he should be. Somehow, they forgot that they were dealing with the same man who had just won the election. And Bolton, for all of his foreign policy savvy, failed to realize that as well.

Here Bolton really shows his frustrations with President Trump. He is happy about some things (the strike on Soleimani, and the withdrawl from the Iran nuclear deal among them), but baffled and annoyed with other issues, like China and North Korea.

BOLTON: Well, I think to say that, you’d have to say that there was a policy and a strategy that he was following. And there really wasn’t. It’s not a policy to say, “I wanna deal with Iran on nuclear weapons.” You have to think through what the implications are.”

It’s not a policy to say, “I want a big trade deal with China.” What are the terms of the trade deal? He focused on terms like China buying more agricultural products, which he said to Xi Jinping directly would help him in the farm states, a really, to me, stunning statement by a president to the leader of an adversarial foreign country.”

BOLTON: When we were in Singapore for the first summit (with North Korea), one of the things he said over and over again– was to ask how many press people were gonna be present for his final press conference. And I think the final number, it was a very large number– as it should have been, 400, 500.”

By the time we left Singapore, he was at 2,000. And I think that number went up from there. That’s what he was focused on. That he had had this enormous photo opportunity — first time an American president has met with the leader of North Korea.”

And he got enormous attention from it. I thought it was a strategic mistake. The U.S. itself got nothing from that. Donald Trump got a lot. The United States gave much more legitimacy to this dictator. And didn’t accomplish anything toward any meaningful discussion on the elimination of their nuclear weapons program.”

To be clear, I don’t think North Korea is ever gonna voluntarily give up its nuclear weapons program. They have tried this line for onto 30 years now. And one successive American administration after another has fallen for it.”

Bolton can justifiably be frustrated with President Trump for not handling foreign policy as deftly as he would have preferred. But again, everyone knew that Trump was a bull in the china shop, so to speak. He can put on a show, but the diplomatic two-step is not for him. Hillary Clinton, as Secretary of State, gave Russia a “reset” button and left Americans to die in Benghazi. Again, the Obama administration’s foriegn policy giveaways – especially the Iran Deal – is a big reason why Trump was elected.

So, why didn’t Bolton testify during impeachment?

Because they didn’t wanna mess up the Democratic presidential nomination. Now, I find that conduct almost as bad and somewhat equivalent to Trump. That they’re torqueing one of the gravest constitutional responsibilities the House of Representatives has, the power of impeachment, around their presidential nomination schedule.”

And they failed utterly to accomplish what they wanted. In fact, they made things worse. Because their strategy fitted with the Trump political strategy. Keep it narrow, and move it fast. So what did they do? The House advocates said, “We have proven Trump is impeached forever, and that he’d learn a lesson from it.”

It’s absolutely 180 degrees the opposite of the truth. Because he was acquitted in the Senate. He didn’t learn lessons from it, other than that he could get away with it, which leaves only the last guardrail — is the election this November. I think the House Democrats built a cliff, they threw themselves off of it. And halfway down, they looked up and saw me, and said, “Hey, why don’t you come along?”

Bolton also says that he believes that there could be evidence of obstruction, but he isn’t the person that investigates or determines what is obstruction, and that the process was so politicized that there really was no point in him testifying. You make the call if that was the correct decision or not.

John Bolton says Pres. Trump's actions with Ukraine "could well amount" to high crimes and misdemeanors, and says "a range of other activities" should be investigated, but defends his decision not to come forward during impeachment trial. https://t.co/jiL4cpiM0x pic.twitter.com/a6Z6LjGeYb

This rationale, of course, has ticked off the Democrats to no end.

But in the end, it was their mistakes that led to the end conclusion of Bolton taking a hard pass on testifying.

So, what is the takeaway from this interview? Bolton is airing the dirty laundry because he doesn’t want to be responsible for anything that happens later. He is absolving himself of any future actions by the Trump administration. But is it honestly worthwhile to do so? He might be entirely correct in his beliefs about President Trump. He says in this interview – which got badly warped in a stupid game of Twitter Telephone – that he will not be voting for Trump or Biden.

John Bolton told @MarthaRaddatz he's not planning to vote for Pres. Trump in November, but he's "certainly not gonna vote for Joe Biden either."

"I'm gonna figure out a conservative Republican to write in." https://t.co/GMDvqok4Ws pic.twitter.com/QDrmJYnhDn

That’s his prerogative, but this is the choice before the voters right now – Trump or Biden. Bolton might feel that by writing this book, he put himself above the political fray. Nothing could be further from the truth.