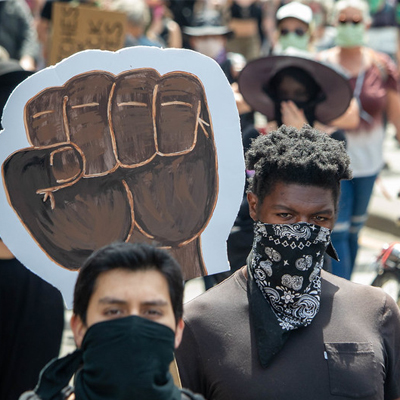 BLM may officially be the acronym for “Black Lives Matter,” but it should really read “Bigoted Lynch Mob.” No, I didn’t come up with that myself. Rather it’s from the mind of Outkick sports writer and partner Jason Whitlock, who is, by the way, a black man.

Whitlock described how GA Sen. Kelly Loeffler, a co-owner of the Women’s National Basketball Association team Atlanta Dream, was concerned that the league was allying with Black Lives Matter. So she wrote a letter to WNBA commissioner Cathy Engelbert. She recommended that the league scrap jerseys emblazoned with “Black Lives Matter,” and instead put an American flag on them.

“The truth is, we need less—not more politics in sports. In a time when polarizing politics is as divisive as ever, sports has the power to be a unifying antidote. And now more than ever, we should be united in our goal to remove politics from sports.”

Well, you can imagine how that went over.

The WNBA issued this statement:

“Sen. Kelly Loeffler has not served as a Governor (owner) of the Atlanta Dream since October 2019 and is no longer involved in the day-to-day business of the team.”

While the Players’ Association was a bit more. . . let’s say “forceful” in its opposition to Loeffler. They simply tweeted:

What was Loeffler’s unforgivable crime, other than researching and questioning the motives of BLM? Basically, that’s it.

“This is classic mob-rule bigotry. It’s pervasive throughout the NFL, NBA and the WNBA, leagues dependent on black players.”

Now Kelly Loeffler does have her own ‘splainin’ to do. GOP Rep. Doug Collins, her rival for the Senate seat to which she had been appointed, questioned her conservative bona fides. He pointed out that Loeffler didn’t seem to mind when her WNBA team supported causes like gun control and abortion.

Doug Collins with just…a remarkable statement on Kelly Loeffler and the WNBA: pic.twitter.com/TfFpYCyx8V

Now that’s fair. And frankly, I see Loeffler as a lightweight who attained her seat via her wealth. Even President Trump didn’t want her to take over Sen. Johnny Isakson’s seat when he retired early.

Yet to shame her for not wanting to support “Black Lives Matter” on jerseys is, as Whitlock put it, “mob-rule bigotry.” But that’s the way they roll. They will eliminate anyone who doesn’t fall in lockstep.

“BLM is a political marketing ploy that callously exploits tragic deaths to advance a political agenda that does not serve black people.”

That’s not only because BLM notoriously wants to defund police, notes Whitlock. It also has its grounding in Marxism and communism, which famously oppose Christianity and other forms of faith. Thus, as a result of those Marxist roots, it opposes the nuclear family as well. Whitlock writes:

“Black people need more nuclear families. . . Some of us believe organizations that oppose religious faith shouldn’t be trusted to lead us.”

Like, for example, Marcellus Wiley, Whitlock’s former colleague at the Fox Sports 1 talk show “Speak for Yourself.”

.@MarcellusWiley breaks down why the NBA’s plan to paint ‘Black Lives Matter’ on courts is a bad idea. pic.twitter.com/EoCJNf7ho1

Jason Whitlock is certainly bold to speak out against BLM, especially in correctly pointing out its lynch mob mentality. Nor does he have much patience with Colin Kaepernick, calling him a “fraud.” Recently Whitlock contrasted “Kap” with Kansas City Chiefs quarterback Patrick Mahomes, who actually is one of the best players in the NFL. Like Kaepernick, Mahomes is also biracial.

But more than that, Mahomes’ ascent to the rarefied air of sports superstardom is also the outcome of social evolution in the nation and the NFL, which once thought that a black player didn’t have the intellectual heft to call plays:

“Evolution is this nation’s defining characteristic. Patrick Mahomes took advantage of it. Colin Kaepernick is exploiting it.”

Jason Whitlock doesn’t wallow in identity politics, either. Rather, as his bio at Outkick states:

I’ve often said that some of the bravest people in America are blacks who push back against the liberal narrative. Jason Whitlock is one of those people, especially for calling BLM what it really is: nothing more than a Bigoted Lynch Mob.