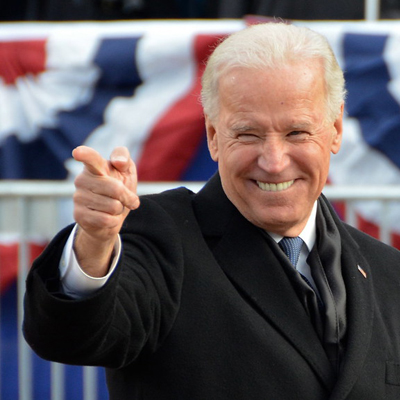 During a virtual “rally” over the weekend, Joe Biden appeared to call President Trump “George.” Or maybe not. Maybe he truly thought his opponent for the presidency is George Bush. Or George H.W. Bush. Or maybe even George Wallace, since the Democrats slam Trump as the Biggest Racist Ever.

I’m pretty sure he won’t be hugging or loving the President, but since this is Joe Biden you never know.

So during his “rally,” Biden declared that four more years of whatever George he was thinking of would “bring a different world.”

Actually, I think Joe Biden is already in a different world.

Here’s how it happened. Watch as Jill Biden moves her lips during Joe’s faux pas. Is she correcting him under her breath with the word Trump? You decide.

The signing interpreter is also fun to watch as she punts to cover for Joe’s mistake. She’s probably thinking to herself, Whaaaat?

But leave it to liberals to swoop in and save Joe in a Twitter cavalry charge. Yair Rosenberg, senior writer for Tablet Magazine, tweeted that Biden was really talking to the comedian George Lopez. Yeah, yeah, that’s the ticket!

“Biden was talking to comedian George Lopez for a Latino turnout event. This tweet is fraudulent misinformation put out by the Trump campaign to mislead their own followers. It’s pathetic and sad.”

So what if Biden was talking about George Lopez instead of one of the Bush presidents. He still referred to him as “who I’m running against.” That would be President Trump, not anyone named George. Rosenberg’s defense is weak tea and completely desperate.

What’s really “pathetic and sad” is that this wasn’t Biden’s only gaffe-tastic appearance in recent days, either. He also bragged about having the “most extensive and inclusive voter fraud organization in the history of American politics.” Which may be true, of course, especially in view of Hunter’s antics. But that’s not what he wanted to say, was it?

Not only that, but he brought up Hitler! during the October 20 debate with Trump.

I have learned that “media fact-checkers” is another term for “Democratic shills.” They’d rather swoon over Joe Biden’s “signature” aviator sunglasses.

Plus, during Sunday’s vaunted “60 Minutes” interview with Joe Biden and President Trump, Biden erroneously claimed that he could “send every single qualified person to a four-year college in their state for $150 billion.” Biden’s staff quickly came to his rescue, claiming that he “misspoke,” and that “free” college would cost taxpayers twice that amount. They had to do damage control stat before the Trump campaign could sink their teeth into that red meat.

We may snicker at Biden’s gaffes, but the reality is much more frightening. Can you imagine a President Biden going toe-to-toe with Chinese President Xi Jinping? Or with Iran? Yikes.

Still, the Democrats bolster him, because he’s their perfect figurehead. He’s the supposed “moderate” who can pull in people who are worried that the party is tilting too far left. He’s the “nice guy” who contrasts with the mean and nasty Donald Trump. Vote for Good Ol’ Joe, they insist, and things will get better. We promise.

It’s shameful that the Dems are propping up a guy who’s clearly failing cognitively. But he’s also the perfect decoy for their agenda: to create the ultimate Progressive State. The left wing of the party will mold a President Biden into whatever they want him to be. Alexandria Ocasio-Cortez admitted as much to Jake Tapper on CNN’s State of the Union on Sunday:

“I think young people are actually quite disciplined and quite realistic and pragmatic in their vote,” Rep. Alexandria Ocasio-Cortez says. “There is no question that Joe Biden is a much better person in that position to be receptive… than Donald Trump” #CNNSOTU pic.twitter.com/6jhK57Vtdv

So they don’t really mind if Joe Biden calls his opponent George, or thinks the United States once had great relations with Hitler. If he can pull off a win, then it’s off to the races with their leftist agenda for the nation.