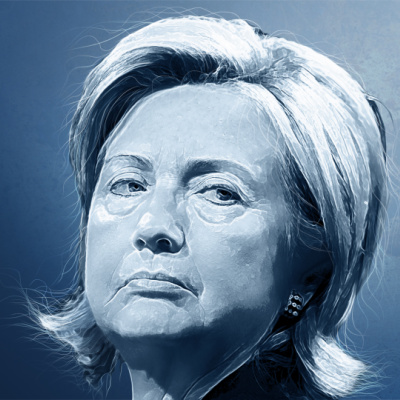 Hillary Clinton told a podcast host that the idea of Donald Trump having a second term as President makes her sick to her stomach. I’ll just bet it does. Twice failed as a Presidential candidate, it must make Hillary want to wretch that a man she despises will get two terms. Everything else that Hillary said in the podcast sounds like a classic case of projection.

Kara Swisher is the host of a podcast “Sway” for the New York Times. Swisher wanted to understand what Joe Biden is feeling as the days tick down in the 2020 Presidential Election. She called Hillary Clinton. As one would expect, Hillary spewed all of the bitter ugly that’s in her heart. If you subscribe to the New York Times, you can listen to the full podcast here. It’s over 40 minutes long. Yes, that voice for 42 minutes. We’ll just take a few of her quotes.

Clinton said she “can’t entertain the idea of him winning” again in 2020 after what she recently called the “emotional gut punch” of her defeat.

“Well, because it makes me literally sick to my stomach to think that we’d have four more years of this abuse and destruction of our institutions, and damaging of our norms and our values, and lessening of our leadership, and the list goes on,” she told the podcast.

Abuse and destruction of our institutions? Like firing the entire White House Travel Office and File Gate as First Lady? Or her epic failures as Secretary of State:

Evidence shows she left the State Department in shambles and our nation weaker. Her record at Foggy Bottom disqualifies her to be president.

Her failures go beyond leaving four Americans to die in Benghazi on Sept. 11, 2012, the ridiculous Russian “reset” and the carnage in Syria that she and President Obama idly watched unfold — and that gets more horrific daily.

A string of investigative reports from the Obama administration shows that she botched key management jobs as secretary of state, threatening American lives and our diplomatic secrets.

Hillary Clinton projects her own failures on to President Trump. Every time I think of Benghazi, I feel sick to my stomach. But, then what difference does it make, Hillary?

You lying sack of donkey excrement, Hillary. You make women look bad. You destroyed Libya, you cow. How dare you criticize President Trump! How many peace agreements did you make? None. I typed Hillary Clinton Peace Agreements into my search engine, and my Chromebook laughed at me. Trump has brokered agreements between Israel, the UAE, the Sudan, and Bahrain.

At nine minutes into the podcast, Hillary bemoans the fact that she got three million more votes than Trump and claims that there is an “air of illegitimacy” surrounding his Presidency. Only in your mind, Hillary.

From Fox News, regarding the podcast:

Swisher, whose podcast is part of the New York Times Opinion network, asked if Clinton felt any “fear” that Trump would go after her legally if he wins.

“There’s no doubt that he would do everything he could to attack and punish anyone who was, in his view, an adversary,” Clinton said. “And he would be aided and abetted, sadly, by both elected and appointed officials.”

Remember Hillary and her description of Trump voters as a “basket of deplorables”? Well, keep in my she hates us more than she hates Donald Trump. He is just the focal point for her hate. She has doubled down now. In the podcast, Hillary says “Most Republicans are cowards, spineless enablers” of Donald Trump.

One final thought that really ought to make Hillary Clinton sick to her stomach. Today is Hillary Clinton’s 73rd birthday. For her birthday, the Senate will confirm Amy Coney Barrett as Trump’s third justice to the Supreme Court. Bwa ha ha ha ha!