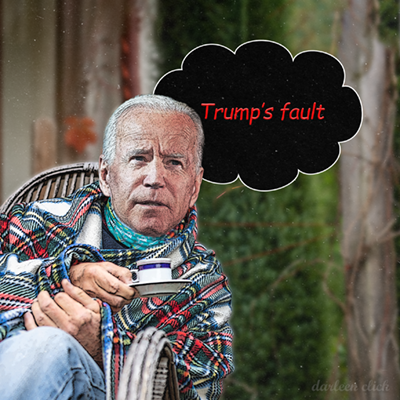 by Nina Bookout in Everything Else 5 Comments

Forget Hillary’s deplorables comment. That darned MAGA people are the extremists. Everything we are dealing with now is THEIR fault. That’s the gospel according to Joe Biden today.

That’s literally the inference that Biden made during his speech on the economy this morning.

The president sought to deflect blame, in a potential preview of the kinds of attacks he and other Democrats will make as the midterms approach. “Let me tell you about this ultra-MAGA agenda. It’s extreme, as most MAGA things are,” he said. A deputy White House press secretary shared a cable news clip of the president’s sharp indictment.

.@POTUS: "Let me tell you about this ultra-MAGA agenda. It's extreme, as most MAGA things are. It will actually raise taxes on 75 million American families, over 95% of whom make less than $100,000 a year. Among the hardest hit? Working families." pic.twitter.com/7ThfXtRTUU

You know, not long ago, the Biden Administration proposed raising taxes on people making $400K or more a year. The Administration has also continually shoveled pandemic money into people’s pockets, done nothing to fix the supply chain backlog at our ports, is promising more asinine student loan forgiveness, and shut down oil and gas permits along with the Keystone pipeline. And yet here he is telling us that the MAGA crowd are the extremists??

Who is responsible for standing up the Ministry of Truth governing board with a cringy singing Steele dossier peddling quack at the helm? It isn’t the MAGA crowd for damned sure!

The Fed raised rates by a half a point this morning, inflation is at a forty year high, and Biden is bragging about fixing the economy.

Our national debt is going through the roof, but hey! Biden saved us some money, sort of.

Yo, Scary Poppins, lots of misleading information here… this is like saying I made $1,000 after losing $10,000 https://t.co/sejoBqnvTL

How bad is our national debt? Take a look.

And this is our current deficit taken minutes ago. pic.twitter.com/B7DpKQ4JpB

I wouldn’t say that is ‘fixing the economy’ would you?

Meanwhile, since Biden pointed fingers of blame at the MAGA extremists, on cue, the media is jumping all over this. Those damned Trump deplorables are at fault for everything and anything. Don’t you know, Biden is doing his absolute best to fix things the progressive way?

Look at the left and Antifa, BLM, the violence, the riots, the gender bending, the massive spending, yet the GOP is exrtreme????? https://t.co/dB99mj6ZEj

We have the playbook folks. Biden and crew will be doing everything they can through the midterms to vilify all conservatives whether they support Trump or not.

Today Biden declared that well over half of this country are dangerous MAGA extremists. They hope we won’t fight back. It’s time we do.