Previous post
The Rational and American Vote is for Trump

Next post
Barack Obama Stumps to Save Joe Biden 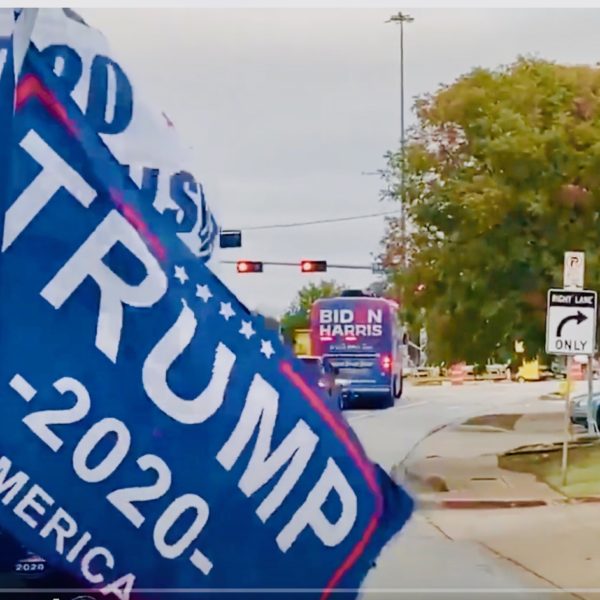 The Biden Bus just couldn’t handle the Trump supporters in Texas. And so, the campaign ran away.

“Supporters of President Donald Trump allegedly harassed a Joe Biden-Kamala Harris bus as it traveled through Central Texas on Friday, according to local Democratic activists.

Videos and photos posted on social media show a long line of vehicles flying Trump flags trailing the Biden-Harris bus as it traveled from San Antonio to Austin on I-35. In some images, the bus appears to be boxed in by the vehicles.

Some members of the Texas Democrats’ campaign say that a Biden-Harris staffer’s car was hit during the incident.

As a result of the incident, campaign events in Austin and Pflugerville were canceled.

Katie Naranjo, chair of the Travis County Democratic Party, tweeted that Trump supporters followed the bus in an attempt to intimidate Biden voters.”

Evidently, driving on an interstate highway flying your candidate’s flags, and driving by the opposing campaign’s BUS is ….voter intimidation! Yes, that is what the Democrats are claiming. Voter intimidation. Good grief, a lot of people really need help these days. Furthermore, that was the furthest thing from voter intimidation. Want to know what it really is? Read Amanda’s post.

Like the Trump boat parades, this was really fun to watch. That poor Biden bus all surrounded by those deplorable Trump people…

What is interesting and HIGHLY illuminating about where the media stands on this, is that every single Texas news outlet has the exact same story. All with the same themes: Voter intimidation, lives in danger, threaten, guns, eleventy! Jake Tapper even jumped in…and then had to delete his tweets, but not before folks grabbed screen shots.

No, the media has no bias whatsoever. None.

This guy, a historian for Pete’s sake, was so triggered by this that he called 911 AND invoked the Third Reich! I kid you not. A sampling of his meltdown.

I flew down to Texas to help with the Biden/Harris bus tour, intended to drum up enthusiasm at polling locations. Instead, I ended up spending the afternoon calling 911. 1/ pic.twitter.com/gKAjv7gv85

Understandably, though nobody was hurt, the rest of the tour was cancelled. And as a historian who studied the rise of the Third Reich, I can tell you: this is how a democracy dies. 5/

The entire thread by Eric he/him dr. whatever dude is worth reading just for the laughs. And yes, they do walk among us.

Needless to say, Trump supporters have metric tons of ENTHUSIASM. Biden/Harris supporters do…NOT. This from Kamala in Fort Worth yesterday was so much cringe.

A. That whole next President introduction thing – that darned quiet part got said out loud again!

B. Kamala’s REEEEE greeting was …is she twelve??

Given Joe hasn’t been in Texas since March, will Kamala bring the votes?

“Asked why Joe Biden has not visited Texas in the general election, Harris told reporters in Houston that the campaign is “putting a lot of resources into Texas.”

“We understand that first of all, the people of Texas — Texas has so much at stake in this election and they deserve to be heard, they deserve to be engaged by us because we intend to earn every vote,” Harris said, according to a pool report. “That’s why I’ve been here, that’s why Jill has been here, and Doug has been here, and we’re gonna keep putting resources into Texas, because it’s a very important state for a number of reasons.””

The enthusiasm is glaringly absent for many of the Biden/Harris campaign stops. In Minnesota there were many more Trump supporters outside the Biden event, leading Biden to his deplorable moment. Terry McAuliffe swears there was metric TONS of energy for Biden in Virginia. Ehhh…maybe half an ounce?

And then there’s this campaign stop with Obama in Flint, Michigan.

You just know that Obama was like, ‘this ‘effing guy!’

All that to say, given the sheer number of Trump supporters cheerfully waving Trump/Pence and American flags while honking their cars and trucks, is it any wonder the Biden campaign and their bus ran away today?