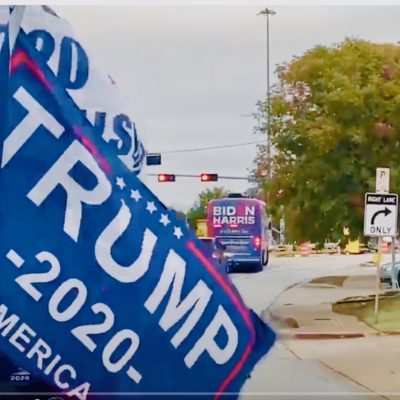 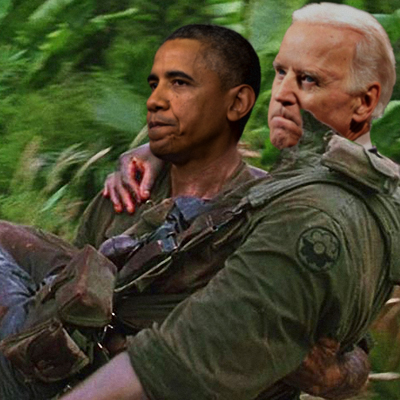 Finally, for the first time in the long campaign season, Barack Obama stumped for his former VP Joe Biden at car rallies in Flint, MI, and in Detroit on Saturday. Calling Biden his “brother,” Obama gushed over Joe, after first exchanging obligatory elbow bumps.

“Joe Biden made me a better president and he will do the same for the country. We sure can’t say that about our current president.”

Then Obama launched into excoriations of President Trump, using the affected A.M.E. preacher speech he uses when he speaks to the masses.

“What is his obsession, by the way, with crowd size? Did no one come to his birthday party when he was a kid? Was he traumatized?”

Obama also mocked Trump’s ego — as if he doesn’t have an enormous ego himself, but that’s different, of course.

“Trump cares about feeding his ego. Joe cares about keeping you and your family safe. That’s what you should expect from a president. You can expect something different from a reality TV star.”

He also accused Trump of claiming “credit for the economy he inherited” and of being “jealous of COVID’s media coverage.”

The Twitterverse was thrilled, naturally, about the Return of Barack. They also swooned when made a 3-pointer clutch shot! OMG! Squee!

so this was absolutely insane pic.twitter.com/W4JL6LQZxq

As for Joe Biden, how did he do at his big car rallies with his Bro Barack shoring him up?

Did Joe Biden forget to get out of bed??? pic.twitter.com/0KvhTBB9qd

Then this also happened when Biden attempted to extol his and Barack’s dream of healthcare for all.

Joe Biden: “Barack and I think it’s a right for people to have badakathcare.”

Okay, then. Whatever you say, dude.

But if Joe Biden was the dream Veep for Barack Obama, why did it take so long for him to stump for Joe?

Let’s go back to the early days of the Democratic primary, when everyone wondered why Obama didn’t endorse Biden. Biden brushed off any inquiries, claiming that he didn’t ask for Obama’s endorsement.

“I asked President Obama not to endorse. And he doesn’t want to — whoever wins this nomination should win it on their own merits.”

But I sure didn’t buy that, and I bet you didn’t either. After all, who doesn’t want a nod from their former boss when they’re vying for a big job, amirite?

Of course there was a lot more to the reasons why Barack didn’t endorse Biden.

One year ago, Ryan Lizza at Politico reported a sit-down Obama had held with an unnamed Democratic candidate:

“He pointed out that during his own 2008 campaign, he had an intimate bond with the electorate, especially in Iowa, that he no longer has. Then he added, ‘And you know who really doesn’t have it? Joe Biden.’”

But that wasn’t all. In August, Politico — no conservative website — told how Barack and Joe’s relationship was, well, complicated. And while they did develop a close friendship over the eight years of the Obama presidency, problems with Joe would pop up.

Aides in the White House would snicker at Biden’s gaffes, including Obama’s deputy national security adviser Ben Rhodes, who wrote that “Biden could be something of an unguided missile.” Plus, former FBI Director James Comey wrote in his book:

“Obama would have a series of exchanges heading a conversation very clearly and crisply in Direction A. Then, at some point, Biden would jump in with, ‘Can I ask something, Mr. President?’”

“Obama would politely agree, but something in his expression suggested he knew full well that for the next five or 10 minutes we would all be heading in Direction Z. After listening and patiently waiting, President Obama would then bring the conversation back on course.”

Finally, there was the fact that Obama had an elite education, while Biden — not so much. While Barack Obama attended Columbia University and Harvard Law School, Biden’s educational history is rather shocking, especially considering that he wants to be President. He repeated the third grade. He graduated 76th out of his class of 85 students at Syracuse Law School. Moreover, Biden is the first Democrat nominee since Walter Mondale in 1984 to not have an Ivy League sheepskin.

So perhaps Obama looks down upon his more plebeian former Veep. It seems that he doesn’t believe that Biden has the chops to sit in the White House, and he probably would’ve rather not done the gigs in Michigan on Saturday. But now he’s also heading to Georgia and Florida on Monday to further stump for Joe Biden.

Is there something the Democrats are secretly fearing? Could it be that Trump is thundering up behind Biden, closing in on the kill, and they know it? So they’re releasing Barack Obama as a last ditch secret weapon.

But as the great British Prime Minister Margaret Thatcher once warned George H.W. Bush, “This is no time to go wobbly.” It’s no time for Republicans to go wobbly, either, even if the race is tightening and there’s the smell of victory in the air. For the love of all that’s holy, vote for President Trump. Encourage your likeminded friends and family members to vote, too. And pray.