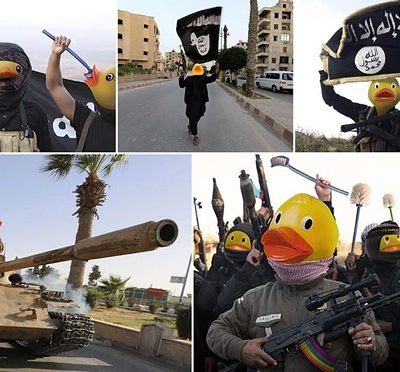 “Free Drinks Come At A Price”: Pennsylvania Columnist Writes About Posing as a Veteran At A Local Bar

“Free Drinks Come At A Price”: Pennsylvania Columnist Writes About Posing as a Veteran At A Local Bar 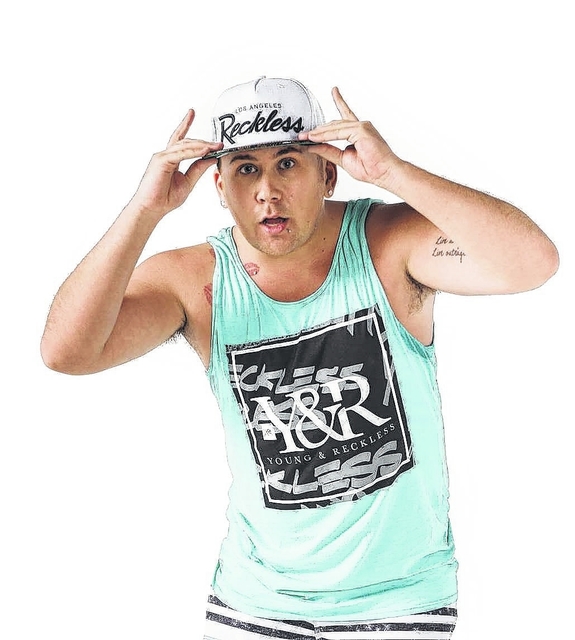 “Journalistic Excellence” at it’s best. In a column for Pennsylvania’s The Weekender, published by The Times Leader Media Group and owned by parent company Civitas Media, local journalist Justin Adam Brown wrote a piece discussing the best way to get free drinks in a bar:

“I discovered the secret to getting a few drinks without having a vagina: just say you’re a veteran. Everyone wants to buy a vet a free drink.”

Classy, right? The opinion piece published on December 23rd by (former) columnist, Brown, goes on to tell of him bragging to a Vietnam Vet about his service in Iraq in order to receive free drinks. The only problem is, Brown never served in Iraq. Brown wrote a column entitled “Sorry Mom & Dad” for The Weekender where he chronicled his “life experiences” in college-until he realizes that he’s not in college anymore. Fear not-that doesn’t stop him from posting the occasional backwards baseball cap selfie, though. Brown, who has penned pieces entitled: “I’m Getting too Old For ‘Netflix and Chill'”, “I caused an overweight girl named Moose to throw a vacuum at me” and “I went to school stoned” was the recipient of outrage for his recent “Free Drinks Come at a Price” piece.

The article has been wiped off of cyberspace with the exception of this screenshot: 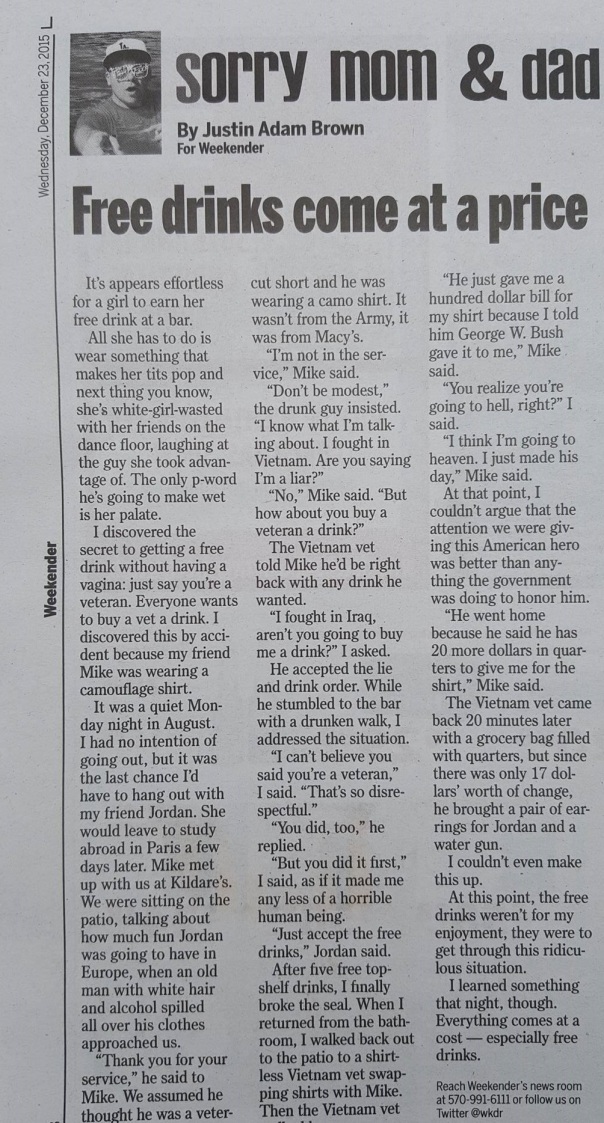 Weekender Editor, Sarah Haase, apologized for the lack of judgement:

Printing only things that I agree with, or believe in, is not the basis of true journalism.

That being said, I know now that I made the wrong decision by printing the column — even if it did accurately express Justin’s opinions and actions. Over the past few days, I have had the opportunity to talk with veterans and active-duty military members alike. In each instance, I’ve taken the opportunity to apologize to them.

Now, I’d like to apologize to everyone else who was offended, insulted, angered and outraged by the column.

Last week, I wrote a column about a situation my friends and I experienced at a bar. My recounting of that situation had the unintended consequence of hurting veterans. We never intended for anyone to believe we were veterans. An intoxicated patron at the bar solicited us, and even though we told him we weren’t veterans, we ultimately played along after being harassed and feeling uncomfortable.

I have an unwavering gratitude and admiration for veterans. I have friends, acquaintances, and family members who have fought and died for our country. I even officiated a same-sex military wedding. To our veterans, and to anyone else I offended, I apologize.

Haas states that printing only the things she agrees with or believes in is not the basis of “true journalism”. Since when do the standards of “true journalism” all of a sudden have an impact on an opinion column? And if she were so concerned about neutrality on the paper’s behalf, why not publish a disclaimer immediately after Brown’s musings before sending it off to print stating that his opinion does not reflect upon the collective opinion of those at The Weekender?

Brown’s apology is equally as weak stating that an intoxicated patron made him feel “uncomfortable” and “harassed” him and his friends into claiming they were veterans (after which they subsequently took the free drinks shamelessly). Now, he’s a victim? Poor overgrown college boy and his bros. They felt “uncomfortable” and had no other alternative but to have that extra shot of Cuervo.

In my opinion, “I apologize” also possesses a different tone than a genuine “I’m sorry”. Although Weekender editor, Haas has claimed to apologize to veterans and active-duty service members over the past few days, she and Brown share in the same sentiment in their apologies to anyone who was offended by the article. This is what we are dealing with-a mentality of individuals spewing insensitivity towards our military and later hitting us with an “I apologize” (AKA #SorryNotSorry, I’m sorry YOU feel that way) and going off on their merry way into the sunset-backwards baseball hat and all off to the next happy hour. Because, after all, every day and any time is happy hour for them. Tell that to the next service member you see who’s just returned from seven months in a DRY country. If this is what young women have to deal with these days when they go out to bars, I truly feel sorry for them. Sorry Mom and Dad, you done raised a clod.