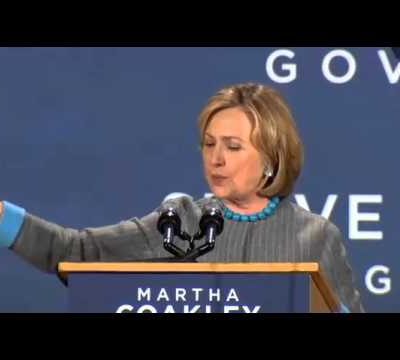 Everyone knows that Hillary Clinton has decided the next crown she is MUST wear is that of President of the United States right? No? Well, for those who have determinedly stayed away from all that is Hillary, I have news for you. She is running, and using her book tour as a “soft” jumping off point by stumping for folks like Charlie Crist. Unfortunately, her “lets do this campaign in a new and different sort of way” has had its missteps and face plants along the way.

Face plants such as the “I was broke”, the “Benghazi fuss”,  charging megabucks for speeches such as that one for $225,000. However, the latest involves her foray just a couple of days ago touting/spouting? her economic credentials.  I know, the same video was posted here last night by our newest blogger Amy, but seriously, if you can handle it, watch the video again to see what she says:

Did you catch that? Hillary thinks raising the minimum wage is A-OK!! Why? Because really you guys, like business and corporations aren’t the job creators everyone thinks they are. I mean DUDE! she seriously said:

“Don’t let anybody tell you it’s corporations and businesses create jobs,” Clinton said. “You know that old theory, ‘trickle-down economics,'” she continued. “That has been tried, that has failed. It has failed rather spectacularly.”

Hillary, Hillary, Hillary…. *shakes head. You’ve now just shown that your understanding of business and economics is well, less than stellar. Lets review some basic facts about how a business can create jobs. I’ll keep it simple for you. Two lawyers decide to start a law firm. Both lawyers need a secretary/paralegal as the business grows. Oh WOW!! That means the lawyers created a job! Then, both lawyers gets so busy, other attorneys, paralegals, and secretaries need to be hired. Oh lookie here! MORE JOBS CREATED … BY a Business. Oh and then, one day that growing law firm, currently with 31 lawyers and double the staff, decides to hire some new lawyer who graduated from Wellesley. Yep – more job growth. That lawyer hired by the growing firm? Why, that would be Hillary Clinton!  OMGEE, a business created the job opening she was hired for.  OOPS

Do you smell what I’m stepping in here? A business starts with one or two people, generates so much business that it hires more and more people; including a certain former First Lady, former Secretary of State, who would REALLY like to be President, and yet that former employee of that firm announces to a crowd supporting Martha Coakley, who is dropping fast in the polls, that business and corporations do not create jobs.

Here’s what Hillary, aspiring Presidential Candidate Clinton, has now accomplished with her pithy little speech on behalf of Martha Coakley. For one, she’s now an equal contender with President Obama (Duffer in Chief) for his “You didn’t build that” schtick. Secondly, she has demonstrated very nicely to businesses the world over, that an understanding of basic business economics is beyond her wheelhouse.  Particularly in light of the fact that it was “trickle down economics”, and business growth that led to the creation of the job opening that led her to the Rose Law Firm. And with that,  I’ll leave our readers with a question from some guy who used to work a President of the United States as his Press Secretary:

Hillary: "Don't let anyone tell u it's corporations&businesses that create jobs." How then did private sector people get jobs? Who did it???