Previous post
California Ranting On Such A Lousy State

Next post
Biden Calls It Quits In New Hampshire Primary 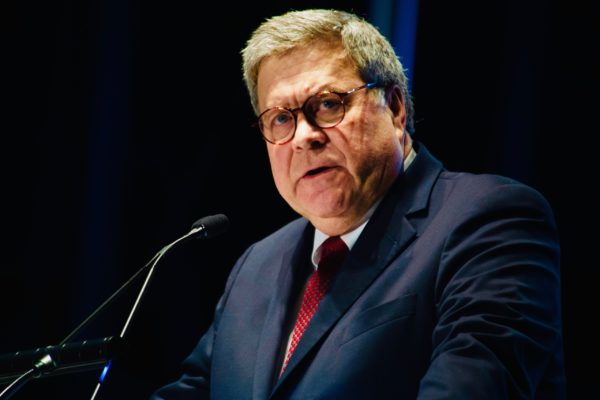 With the announcement of lawsuits against key sanctuary cities, Attorney General William Barr capped off a very busy day yesterday.

Speaking at the National Sheriff’s Association conference, Barr’s speech is well worth watching. His comments regarding illegal immigrants and sanctuary cities starts at about six minutes in.

It seems that many need to be reminded that entering a country without permission is ILLEGAL. Yet far too many, including politicians from the local to federal level, seem to think that isn’t a very big deal. When, in fact, it is.

Those liberal cities that want to shield illegals who have committed crimes from being deported are placing the public at risk.

“These policies are not about people who came to our country illegally, but have otherwise been peaceful and productive members of society. The express purpose of these policies is to shelter aliens whom local law enforcement have already arrested for crimes,” he added.”

“U.S. immigration officials are asking a federal judge to force Denver to turn over information about four men accused of crimes who are subject to deportation after the city refused to comply with its order to do so.

In a continued escalation of the conflict between federal officials and so-called sanctuary cities, U.S. Immigration and Customs Enforcement filed a complaint in Denver federal court Thursday asking that a judge enforce administrative subpoenas it issued to the Denver’s sheriff department last month for information such as addresses, identification and arrest reports on the three Mexicans and a Honduran.

Accusing ICE of seeking the information for “political reasons,” Denver said it would not comply unless a judge determined that the orders were appropriate.”

Oh really? Let’s talk about “appropriate” shall we? Denver officials are saying that a judge should determine if a federal order is appropriate regarding these criminals. They have committed a crime. That should mean deportation. Period. Full Stop.

These four criminal illegals aren’t being accused of robbery or vandalism. Nope. It’s worse than that.

“According to ICE, all four men have been deported multiple times. One of the men from Mexico was arrested in Denver for sexual assault, another for vehicular homicide and a third for child abuse and strangulation assault. The Honduran man was arrested on domestic violence charges.”

Yet cities like Denver, New York, Seattle, and too many others would rather keep the criminal illegal from being deported because political correctness and virtue signaling.

That’s the key. Sanctuary cities and states DON’T care that people enter our country illegally and commit crimes. They DON’T care about the safety of American citizens. Instead, they’d rather virtue signal and try to convince everyone that these new lawsuits are just a political stunt.

Supposedly it is the lawsuits and Trump’s stance against sanctuary city policies that are endangering the public. We are to believe that coddling criminals, especially those here illegally, doesn’t harm anyone.

I bet the families of those victims who were abused, sexually assaulted, strangled, and murdered have  a different opinion on the matter.

I applaud Attorney General Barr's recent actions to hold sanctuary cities accountable to the laws of our nation.

Sanctuary cities put their residents in jeopardy from potential violence from illegal aliens.

We are a nation of laws. President @realDonaldTrump understands this. pic.twitter.com/U6yG9G9mGy

It is completely understandable that many in law enforcement are beyond frustrated with politicians these days. Police are supposed to follow all laws. Period. Yet when idiot politicians like de Blasio hamstring them by telling them to IGNORE the law in favor of political correctness, then more lives are being put at risk.

“The 'Supremacy Clause' in Article VI of the Constitution provides that the 'Constitution, and the laws of the United States which shall be made in pursuance thereof… shall be the supreme law of the land.'" – Attorney General #Democrats are forewarned. https://t.co/YBviaczcVu

Will the Democrats listen? Nope. That won’t happen unless or until they are adversely affected by the policies they gleefully enacted.