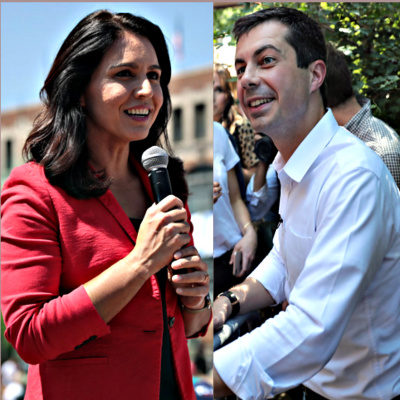 Previous post
Tulsi and Pete; A Tale of Two Veterans

Next post
William Barr And The Sanctuary Cities Lawsuits

California’s Gov. Gavin Newsom showed up on The View yesterday to proclaim the state the most awesome, gnarly, we are shredding it, dude! EVAH!

Of course, he was lying through those bleached teeth and, also of course, the gals fan-crushed on him like a bunch of groupies outside the tour bus willing to lift their shirts and show their ta-tas for attention.

If you can keep your gag reflex in check for about six minutes, watch (I’ve cued it to start at 18:23 mark when Gov. Nuisance is first introduced)

Ok, Bernie Sanders. But he’s never stopped being a commie and pining for the fjords of Bolshevik Island.

Point remains — being big is not synonymous with being functional. And, boy howdy, California is dysfunctional on so many levels. Gov Hairgel’s claim that California is proof that progressive values works begs the question, works for whom?

Does it work for the law-abiding citizens who are stepping over human feces and syringes on the streets of San Francisco? Is it working for the citizens of Los Angeles who contracted typhus and typhoid fever because of homeless encampments? How about the fires started by homeless? Or the murders and rapes committed by them, right on the streets in full view of the public? The refusal of cities and state to enforce any vagrancy laws has led to California, 12% of the nation’s population but is #1 in the nation’s homeless. And no, handwringers, it has little to do with the housing crunch in California.

The View Gals were too busy tongue-bathing Newsom to ask about the homeless crisis. Little girl squeals while hinting he should run for President. Not one question about the out-of-state exodus of citizens and businesses. How about forest mismanagement that has lead to worst wildfires? Or a k-12 public educational system, guaranteed by law to 40% of the budget, ranked only 37th? Or sanctuary policies that have dangerous illegal criminals released to the streets to commit assault, rape and murder? Speaking of crime, why not one question on the rising crime rates due to Prop 47 and 57?

Newsom brags of a $21 billion operating surplus – with the highest taxes in the nation and a huge tax increase on the March primary ballot which will also undo a significant portion of the historic Prop 13.

Not a breath of curiosity on how a Governor can sit down and sign 870 bills in one legislative session and actually know what he signed.

And let’s not forget how California’s independent contractors and small businesses have been and are continuing to be devastated by AB5.

If there is one thing that is actually getting a lot of bipartisan support, it is all the people who woke up to be signed out of existence by AB5.

Gavin Newsom, a superhero in his own mind, sat in front of a New York audience for a nationally broadcast show and lied about the state of California. Those fan-girls knew it, too.