When Is It “Okay To Be White”? Oh Please, (White) Democrats! Tell Us!

Next post
It is ridiculous to want honesty in dating? Transgenders this is not how you self promote

When Is It “Okay To Be White”? Oh Please, (White) Democrats! Tell Us! 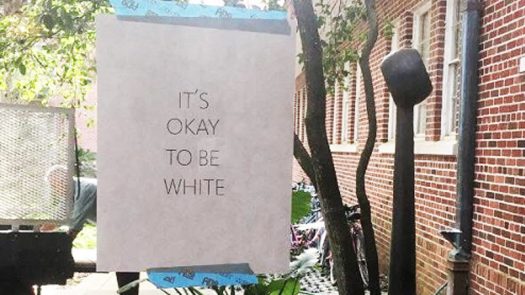 Was this a trick or a treat? Apparently, a Maryland high school did not find the flyers with five words on them to be much of a treat when they saw them plastered all over campus this past Tuesday. The five words? Glad you’ve asked: 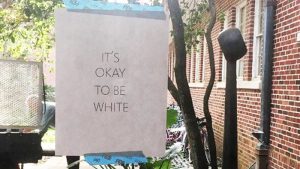 According to WaPo, these flyers have also turned up in Rocky River, Ohio; at Concordia College in Moorhead, Minn.; at Tulane University in New Orleans; at Montgomery Blair High School in Silver Spring, Md.; around college-campus rich Cambridge, Mass., including the Harvard Yard and at the University of Alberta in Canada. In most cases, schools and cities have pulled the posters down, but the message has continued to spread in images and hashtags across Twitter and other social media platforms, even prompting a related Know Your Meme entry. Even the Southern Poverty Law Center chimed in. More from Tucker Carlson:

More from our friends at WaPo:

The episode is indicative of the efforts white-nationalist groups have made to recruit in and around the nation’s college campuses and other mainstream settings with claims of growing white maltreatment and expanding anti-white discrimination. The white victim construct is one that experts say, not so long ago, only had traction in avowed white supremacists, segregationists and neo-Nazi circles. But today, it animates open and anonymous public discussions of race and shapes the nation’s politics.

What, what? In some circles, the above is the truth that some want to believe. In other circles, the flyers were spawned from the site 4Chan to troll the alt-left.

The irony of this is, if the flyer said anything else like, “It’s okay to be black” or “It’s okay to be gay” or “It’s okay to be Muslim” or “It’s okay to be Atheist,” would there be cause for such an uproar, or would this little piece of paper be construed as nothing but an expression of free speech? And, if it’s NOT okay to be white, it’s also, in their book, FAR from okay to impersonate or “appropriate” another culture either so, really, what gives? Is it okay to be a freaking potato? I mean, I give up! We’re sure to offend someone there, right? Anyone? Bueller? Bueller?

When is there a problem with being white? When you are a straight male or female. When you read your Bible. When you want to crush people who come in through our borders and take away the lives of loved ones for no reason other than their venomous hate. When you hate seeing your white kid being discriminated against because he is a white male and doesn’t belong to “the cool group”. When you value the lives of the innocent more than your own and are appalled at the sheer selfishness of other women around you, all while women in other countries are raped and genitally mutilated. When you think Hollywood and the political figures they support are hypocritical pieces of crap. When your spouse and other friends have spent months eating MREs or living in tents and getting shot at and you decide not to watch some jackass making millions of dollars in a football uniform KNEEL. When you have a sense of pride and are not a victim because you have worked hard for everything in this life and are sick of people who just want a handout. Then, we have problems! Then, you’re a bigot, a racist. A faaaaaaaaascist and it’s NOT okay to be white!