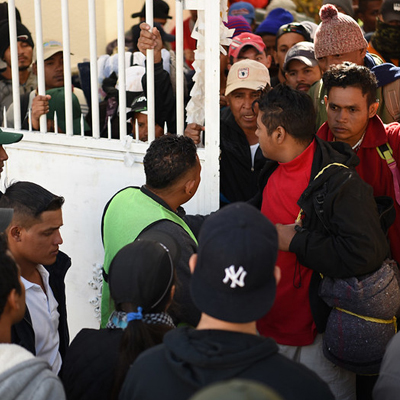 Who had this on their Bingo card for the week? Apparently folks in the Biden administration found that a Trump era border restriction isn’t so bad after all.

This isn’t exactly a game-changer, however. After all, with these guys you know that there’s some ulterior motive behind this move.

On Monday, the Centers for Disease Control confirmed that with all those migrants crossing the southern border possibly carrying — gasp! — Covid, the administration decided to keep Title 42, a Trump public health rule. In short, due to Covid, the border patrol will expel illegal migrants, with the exception of unaccompanied minors. Supposedly, anyway.

As for when the administration would lift the order, the CDC stated that it would be up to the director:

“This order was issued on August 2, 2021 and shall remain in effect until the CDC Director determines that the danger of further introduction of COVID-19 into the United States from covered noncitizens has ceased to be a serious danger to the public health. . .”

However, the ACLU doesn’t care for this turn of events. In fact, they’re now planning a lawsuit to force the administration to lift the health order — the nation’s safety be damned, of course.

We warned the Biden administration that we'd see them in court if they continued to misuse Title 42 to unlawfully expel people seeking protection at the southern border.

And, as an ACLU lawyer added in a statement:

“We gave the Biden administration more than enough time to fix any problems left behind by the Trump administration, but it has left us no choice but to return to court. Families’ lives are at stake.”

But, as Nina pointed out, Title 42 hasn’t been followed very well by the Biden gang, anyway. So why rock the boat now?

Because the hypocrisy and double standards of this administration are not a good look. And they know it.

The recent shenanigans of Catholic Charities of the Rio Grande Valley in Texas are jaw-dropping. And while CNN and MSNBC are loathe to cover it, Fox News reporter Bill Melugin found that the Charities are now using two hotels to house Covid-positive migrants.

NEW: I asked the executive director of Catholic Charities of the Rio Grande Valley how many COVID positive migrants they are currently housing in local hotels. She told me “I have been advised not to comment.”

A second hotel has been confirmed. Texas Inn in Weslaco. @FoxNews pic.twitter.com/AWNGXaBsII

Meanwhile, the CDC is advising regular Americans to mask up again, even though they may have received their Covid vaccinations. Washington, DC, and San Francisco have issued mask mandates once again, and now New York City is requiring vaccination proof for indoor settings. So you know they’ll lower the boom again soon. It’s just a matter of time and the Delta variant.

Plus, doctors are getting an earful from their patients who remain confused about the flip-flops of the CDC. Especially when they see bigwigs like Barack Obama host several hundred people for his birthday bash.

Watch Jen Psaki try to spin her way out of that kerfuffle:

In other words, Americans are experiencing some real Covid whiplash. So the administration is throwing them a sop to shut them up — for now. As I said above, there are ulterior motives afoot.

The Democrats know that 2022 is coming much quicker than they would like. They also know that Joe Biden is a decrepit simpleton in serious cognitive decline. And no one likes Kamala Harris, either.

This rambling idiot has control of the red button.

So even though the Biden gang would prefer to throw out All Things Trump, they’ll crow about keeping Title 42 to protect the nation’s health. But make no mistake — they just want to keep the rabble quiet. Meanwhile, after the Covid dust settles a bit, they’ll go back to business as usual, which means throwing the borders open once again. That is, if they truly planned to close them in the first place.