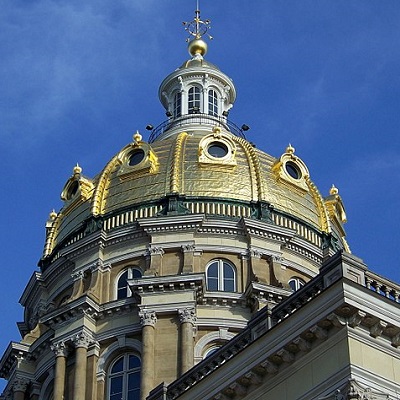 Iowa BLM protestors agitated Iowa State Police last summer, to the point of being arrested and banned from the capitol—resulting in a big pay off for BLM.

While the rest of us had Minneapolis, Seattle and Portland riots running through our news feeds last summer Des Moines, IA had their hands full of BLM rioters. May and June was marked by violent protests in response to George Floyd’s death, like so many other cities.

In Des Moines in July the issue suddenly changed. Piggy backing on the white noise of BLM violence across the nation, BLM’s new issue in Iowa was voting rights for felons. Because, why not? Right? The cluster of fun known as Election 2020 approached and dammit, felons have rights too!

“’We’re not going to have enough time for these folks who have been disenfranchised – some folks for decades – to get them registered to vote, to be engaged in the process,’ [BLM organizer Jaylen Cavil] said.’

BLM organizers had November’s election on their minds so why not grab the baton of violence and bring voting for felons into the mix. Why the hell not, right? The flashpoint for this little experiment was July 1, 2020.

It was widely reported that several bad things happened. Now when I say bad, it’s bad by law enforcement standards of safety. Like in normal times. When it happened daily at riots during the chaos of 2020, it became a normal day at the office for most law enforcement.

One of the undisputed big things that happened; demonstrators rioters tackled a capitol state patrol officer and got ahold of his firearm.

Do you want to see a police officer pee his or her pants? Tackle them to the ground and commandeer their firearm.  To wrestle a firearm from an officer’s locking holster requires someone with knowledge and evil intentions. Thank the Lord in this case the firearm was recovered. After watching the violence such demonstrators rioters are capable of across the nation, that incident could have been catastrophic.

Did you watch the rest of the video? Did you see at the :50 mark with a demonstrator rioter showing documents police had in their possession to recognize BLM agitators? Showing those documents to the media? Specifically, documents taken from the back pocket of an officer. Apparently when taking down a police officer while overpowering them in the tussle, it’s hand on literally for rioters. Grab firearms, grab papers, grab grab grab. For the documents in officers’ pockets, guess what, that is stolen confidential material. Yeah, you can’t do that.

The agitator that showed his spoils to the media faces felony charges for such a stunt.

“Alexandria Dea, 26, took the intelligence bulletin from an officer’s back pocket during a confrontation between officers and protesters, which began after officers arrested three of the suspects inside the Capitol, the criminal complaint against her alleges…Viet Tran discussed and displayed the bulletin during an interview that was broadcast.”

The documents the officers were carrying around were from a June 20th incident involving the destruction of a police vehicle.

So let me get this straight. We have demonstrators rioters doing what they do best. Violence, terrorizing, demanding, assaulting all while claiming to be victim of police. Let’s be honest, when they have an officer in their grips, they get really handsy too.

We might all take a little glee to know five of those demonstrators rioters were banned from Iowa’s capitol. To the communists running the media, we might ask a valid question. How is it these demonstrators overtaking Iowa’s capital, threatening police, assaulting police and stealing confidential property not an insurrection? It’s a legit question.

I know, I know. The left engages in what they are guilty of, then blame conservatives for it. Lather, rinse, repeat.

Ready for the next sour pill in this sordid sage known as the Violence of Summer 2020? The ACLU sued on behalf of five of these nimrod demonstrators rioters, and got a $5,000 legal settlement for five of these wretches and $45,000 for their attorney. Nice big pay out for BLM, nicely done, ACLU.

“The [ACLU} of Iowa filed a lawsuit claiming the ban infringed upon the protesters’ right to free speech, assembly, petition, and due process…State lawyers recommended that each protestor be paid $5,000 and their attorney $45,000, which was approved by the State Appeal Board…the state also agreed to remove all bans on the protesters…individuals ‘may continue to enter and use the Iowa Capitol Complex on the same basis and under the same terms as any other law-abiding member of the public’…The Iowa Department of Public Safety agreed to train its Capitol officers on issues relating to the First Amendment.”

What a pile of horse crap. BLM rioters get their payoff and their attorney just made payroll. Okay, fine. They settled. The gut punch to all things lawful and orderly come with the granting entrance to the capitol for these violent thugs hellbent on harming officers. Oh and officers have to go to training to learn to be assaulted by BLM rioters. For the love!