Next post
Biden Team Dodges All The Money Questions 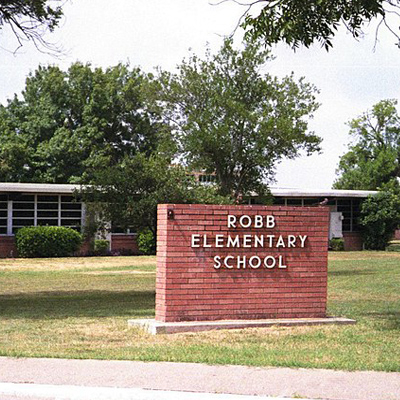 Three months to the day when a shooter took the lives of 19 students and two teachers in Uvalde, TX, its school board gave its police chief the boot. The board voted unanimously to fire Pete Arredondo for the atrocious manner in which he handled — or rather, didn’t handle — the killer at Robb Elementary.

To which we at Victory Girls say, Good riddance!

A Raucous School Board Meeting in Uvalde

The atmosphere in the high school auditorium, the site of the meeting, was volatile as parents of the dead children expressed their rage at Arredondo. Afterwards, the board met in a closed session off the stage.

As a Washington Post reporter on the scene tweeted:

“Uvalde families have commandeered this school board meeting and turned this into a listening session. Meanwhile board members meet in closed session about Arredondo’s firing. Quite the scene as relatives tell stories, say their piece, there’s an empty stage behind them.”

However, the closed session didn’t go over well with many attendees. For instance, an uncle of one of the victims jumped onstage and caught the surprised school board off guard before they adjourned to deliberate. He handed them a letter, demanding that they preside in public. “Our babies are dead!” he told them. The board responded that under the law, such proceedings had to be in private.

During the meeting, several parents wore orange t-shirts which bore images of the victims. Other held signs which read “Protect and Serve. Who. Yourself.”

The Uvalde school district's police chief was fired Wednesday following allegations that he made several critical mistakes during the mass shooting at Robb Elementary School that left 19 students and two teachers dead.https://t.co/G5ihF91IlB

During the clamorous meeting, a Uvalde girl who lost friends in the massacre also took to the mic and demanded that Arredondo step down. And while I look askance at using kids as props for adults, I think this child spoke from her heart.

Then, after 90 minutes, the board returned to take its final vote in public. Cheers erupted as one of the board members made a motion:

“I move that good cause exists to terminate the noncertified contract of Pete Arredondo, effective immediately.” 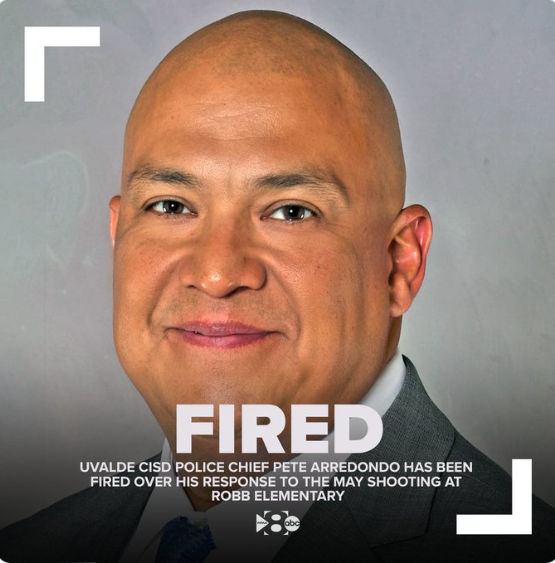 But many of the parents weren’t satisfied. One woman called the sacking of Arredondo “the first victory,” and said “They need to fire the rest of them next.”

George Hyde, the lawyer, issued this press release, which read in part:

“Moreover, it has been publicly reported that Chief Arredondo has been the victim of death threats made by individuals with the means to carry them out. The last thing anyone wants is for these proceedings to be compounded by violence, especially gun violence. Despite death threats being common knowledge, the School District has not disclosed any effort on its part to ensure the safety of Chief Arredondo … Without such steps, Chief Arredondo does not believe the planned district meeting is safe and is certainly not going to appear without exercising his state rights to be armed, unless the School District discloses in writing its safety protocol to ensure Chief Arredondo’s life …”

However, Arredondo has quite the cajones when he’s hiding behind George Hyde and the 17-page statement he issued defending his client. Hyde called Arredondo’s actions “reasonable,” and the chief himself “courageous.” And if Uvalde parents can’t see his fine leadership qualities, then they have the problem, and they’re engaging in an “illegal and unconstitutional public lynching.” Hyde also demanded that the Uvalde school board reinstate him.

“Chief Arredondo is a leader and a courageous officer who with all of the other law enforcement officers who responded to the scene, should be celebrated for the lives saved, instead of vilified for those they couldn’t reach in time.”

School is Starting in Uvalde

Meanwhile, Uvalde is preparing to start the new school year in a brand new elementary building. But the children of the town remain afraid. And while the new school is surrounded by 8-foot fencing, and features security cameras and additional officers, some children will not be attending. Instead, they’re opting for online classes. Other children will be attending private schools, like one operated by Sacred Heart Catholic Church. Sacred Heart, in fact, has doubled its enrollment over last year.

As one mother said, “They are not ready for the new school year. Nobody feels safe going back to school.”

However, Andrea Herrera, a 10-year-old survivor of the shooting who lost her brother in the massacre, has wanted to go back. So she asked her grandmother, “What do you think, ‘Buela?”

The grandmother told Andrea to trust her instincts. Whereupon the girl told her mother:

“I want to go back to school.”

Her mother agreed, and Andrea will be returning to school.

But Chief Pete Arredondo won’t be back. And while it will take a very long time for Uvalde to heal — and for some, they may never truly recover — the departure of the spineless Arredondo may be an important first step for closure.