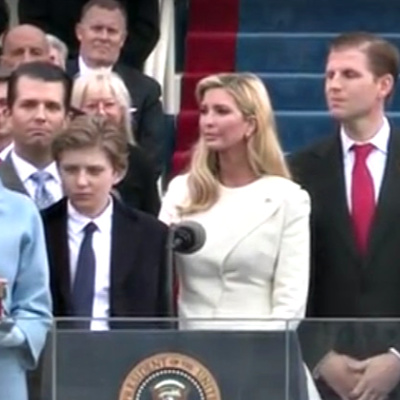 On the day that God gave out moral fiber, Minority Leader Chuck Schumer must have been having his nose-hair styled. Schumer sees that the Impeachment Trial of President Donald Trump is sinking faster than the S.S. Minnow. He is sticking his fingers in leaking holes and hoping that tall tales from John Bolton will buoy him until he can get safely to harbor. Schumer believes in saving himself first, so he slandered the Trump children and threw them overboard in his press conference today.

On Sunday, the New York Times published a leak from Bolton’s forthcoming book (I won’t name it here.) in which he alleges Trump told him he was withholding Ukraine aid for political reasons. You can read Deanna’s post about it here. Bolton also alleges that he though President Trump was “granting personal favors” to certain dictators. Here is the relevant passage:

John R. Bolton, the former national security adviser, privately told Attorney General William P. Barr last year that he had concerns that President Trump was effectively granting personal favors to the autocratic leaders of Turkey and China, according to an unpublished manuscript by Mr. Bolton.

Mr. Barr responded by pointing to a pair of Justice Department investigations of companies in those countries and said he was worried that Mr. Trump had created the appearance that he had undue influence over what would typically be independent inquiries, according to the manuscript. Backing up his point, Mr. Barr mentioned conversations Mr. Trump had with the leaders, President Recep Tayyip Erdogan of Turkey and President Xi Jinping of China.

Um. I don’t think that President Xi considers those trade tariffs a “personal favor”. Schumer is peeved a Joe and Hunter Biden for gumming up his Impeachment Trial, so he decided to take it out on the Trump children. The relevant portion is about two minutes and thirty-five seconds in to this video:

“Did the President have financial interests at stake when he was talking to Erdogan, Orban, Xi and others? Maybe his kids had some economic interests at stake?” How dare you slander the Trump children with absolutely no evidence, you walking, parasitic amoeba.

Remember when former Senator Harry Reid said on the floor of the Senate that he heard the Mittens Romney hadn’t paid taxes in ten years? Yes, a lie out of whole cloth. That is what Chuck Schumer just did to the Trump children.

Senator Rand Paul was on Fox News with Ed Henry while Schumer was speaking. When Henry cut back to Paul right after Schumer made the comments about unspecified Trump kids, you could literally hear the anger in Paul’s voice. He thinks the Trump’s should sue Schumer for defamation.

And, Schumer probably can be sued since he wasn’t speaking from the floor of the Senate. They probably won’t sue. I would like to see President Trump hit Schumer hard with the Twitter machine. The Trump family is maintaining their current contracts but not taking on projects. So go sit and spin, Schumer.

And, this is also another case of projection. Just because some Dem kids are cleaning up on their folks power, they assume everyone does it. Schumer has no morals or ethics by making this scurrilous charge on the Trumps.

This Impeachment Trial cannot sink fast enough. No matter how hard the Dems try to salvage this ship, it’s going down. The sick, pathetic Democrats are showing their backsides every time the open their pie holes.