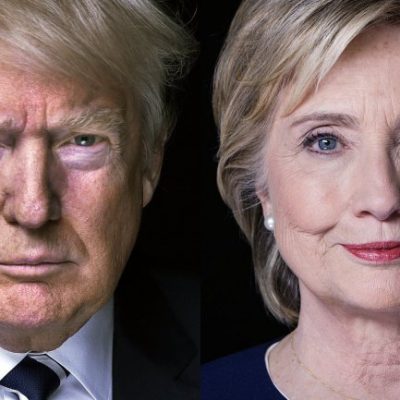 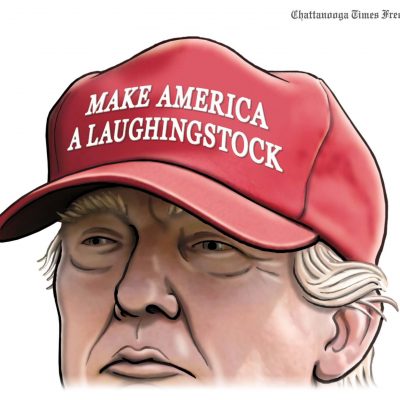 Next post
Too Bad Trump Supporters, GOP, Fox: I Still Will Not Vote for Trump. 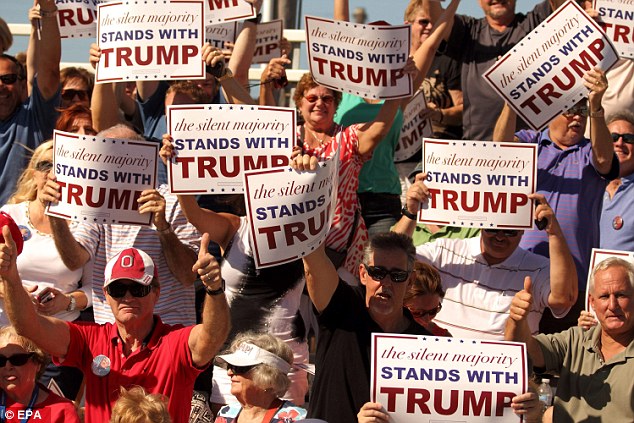 “He was born without the gene for shame.”

It was October, 1993, and Donald Trump’s mistress, Marla Maples — whom he would shortly make Wife #2 — was in labor in a NYC hospital birthing suite. Stasi’s editor told her to get the story, which she was reluctant to do. But she called Trump, whom she personally knew, and while he first denied her access, he finally told her, “Oh, all right.”

Stasi remembers, “I was thinking, ‘This is horrible, this is horrible.’ I was just cringing all over.” Upon arriving at the birthing suite, she found Marla Maples cooing over newborn baby Tiffany, and Donald boasting that he cut the umbilical cord himself. Stasi was relieved that Maples was as “gracious as a woman could be right after you have a baby and your husband just let a reporter into the room.” As for Trump, Stasi said, “He was born without the gene for shame.”

It was that lack of shame and a tremendous capacity for self-promotion that propelled Trump to become the golden boy of NYC’s tabloids. Lou Colasuonno, editor of the New York Post in 1992 and 1993, remembered getting frequent calls from Trump. “He would definitely call me, personally, absolutely — on a lot of occasions.” Trump was “like a walking, talking tabloid editor’s dream. He was fun. He sold papers for us — no question. That’s a fact.” A Post reporter, Frank DiGiacomo, said that Trump “was radiating this almost cartoonish idea of wealth and celebrity and status. He honed a very simple, easily disseminated message. It’s not that different from what it is now: I embody success. I’m a winner.” 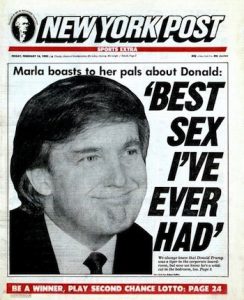 Mitchell Fink of the New York Daily News experienced the same. “He courted us constantly. He probably couldn’t stand any of us, but we served a purpose — to keep his name in boldface. And that’s all he cared about. And I believe with all my heart it’s all he cares about now.”

Do any of these tabloid reporters regret turning Trump into the publicity monster he became? DiGiacomo has some regret. “I guess maybe I do feel a little guilty. But I think I probably share that guilt. . . If I’m going to hell, I’m going to hell with a lot of people.”

Fast forward to 2016. Donald Trump, after seducing Apprentice fans, consumers of tabloid fodder, and purchasers of his cavalcade of Trump products — not to mention scores of women and the poor saps who bought into Trump University — decided to undertake the biggest seduction of all: the American public.

Trump was already a household name. His reputation for being garishly rich was legendary. Timothy O’Brien, in “Trumpology,” says that the public “are buying into him as a successful entrepreneur and this poster boy for wealth — it’s a certain kind of wealth that really appeals to lottery winners’ sense of what you do when you’re wealthy. You have a huge marble apartment with giant old pictures.”

Trump seized the attention of the audience of the awestruck and tapped into their fears. O’Brien says:

And there are white, working-class American voters who are afraid of immigrants and deals with China, and their plight since the ’08 financial crisis has been overlooked by elite media and elite political institutions that didn’t see Trump coming. I think that’s actually the same audience that buys into the optimism of The Apprentice. . . . . The political institutions let them down. The economy let them down. And here’s a guy coming in, saying, “I’ve got the solutions for all of this.” . . . . All this stuff is preying on people’s most base fears about the threat, what they feel is a threat to their well-being.

And the rallying cry? “Build a wall!”

Gwenda Blair adds, “Now he’s also piling on with insisting that the country is at the bridge of collapse, that the military is decimated, that we’re about to be invaded, that it’s an absolutely nightmare scenario and we need a strong leader. It’s over and over again, how bad we are.”

Right. All we need is a Strong Man to fix all our problems. And Strong Man Mussolini made the trains run on time, too.

While Trump is fooling his adoring worshippers who are firmly convinced he will build that wall, depose the “establishment,” and generally make life in America a utopia, Andrew C. McCarthy at National Review wonders when they will realize they’ve been had.

Trump fans swoon to the charlatan promise of a fortress wall that will never be built, much less paid for by Mexico. Meanwhile, it doesn’t seem to register with these voters that Trump is promising to give legal status to millions of illegal aliens after temporarily deporting them.

Yet millions of those voters have been taken in by Donald Trump, who funds the establishment they tell us they despise and would press the agenda that has driven them from the GOP.
When will they realize they’ve been had?

Donald Trump is the son of a despotic father and real estate mogul who bilked the political system; the not-so-brilliant business man who survived near-bankruptcy by conniving with lenders; the builder who may have courted the mob; a gilded huckster whose stock-in-trade is self-promotion. He’s offering voters a fool’s paradise. He will not deliver on the Golden Age he promises.

This presumptive nominee is no better than the corrupt Hillary Clinton. They are two sides of the same corroded, liberal coin.

But what else can one expect from a man who was born without the gene for shame?

We come to the final installment of our four-part series, “Trump 101,” based on the online articles Trumpology: A Master Class and Tales From the Tabloids, both published by Politico Magazine.