Next post
My Butt's Been Wiped - The Great Debate 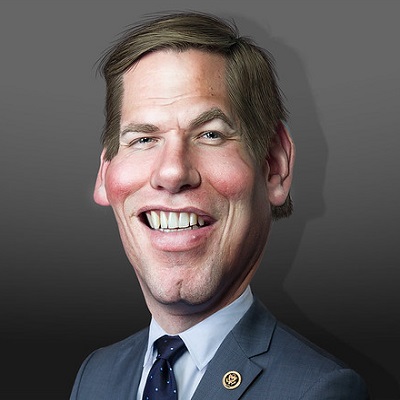 by Shelby Gallagher in Headlines 7 Comments

Rep. Eric Swalwell (D-China) tried to work up a media frenzy using Democrats’ favorite date – January 6th – in a weak attempt to keep attention off himself. No one is falling for it.

Whenever Swalwell’s mouth or Twitter feed is producing words, one should wonder if he’s being fed talking points from China. It was only eight months ago we all found out he had a unlawful financial relationship with a known Chinese spy, who had planted an intern in his office. All the while, he was the first to point a finger at then-President Trump for his ties to Russia in a feeble attempt to divert attention off himself and towards Trump. Many of us on the right suspected there were salacious details of Swalwell’s relationship with Fang Fang. Swalwell he did his best to blame the messenger. There’s your first clue how this cat operates.

Monday, Swalwell attempted to be cute by tweeting

Caught! Another right-wing/Fox News conspiracy headed our way. But I’m not going to let it divert from the 1/6 heroes who saved the Capitol and are testifying tomorrow. But wait until you see the receipts I have on who is involved. #ApplesDontFallFarFromTrees

First question anyone should ask, what news drop is Swalwell attempting to create a diversion for? Conspiracy theory? Coming his way? Whatsoever could it be? I know! Based on behaviors, could it be that Swalwell and Hunter Biden are brothers separated at birth? After all, they both have a thing for illicit relationships. Both have accusations of dubious fundraising. Both have unethical ties to China. Both are compromised and pose a huge security risk to the United States. Most importantly, it will take an act of God for anyone in the Democrat party to investigate either slimeball.

In the end, Democrat leadership thought Swalwell’s compromised relationship wasn’t enough for him to be shuffled out of the House Intelligence Committee.

These days, Democrats could polish the turd Swalwell is and assign him to the January 6th committee and call it a promotion out of the House Intelligence Committee. MSNBS (sic, intentionally) would eat that up faster than Hunter Biden consumes a crack pipe. No such luck.

Speaking of Hunter; the similarities are alarming. Has anyone seen Hunter and Swalwell at the same time? It is a legit question in these strange days.

Back to Swalwell, Axios reported in December of Swalwell’s illegal financial connections with Fang Fang and Fox News ran with it all while questioning why Swalwell continued to be on the House Intelligence Committee. Here’s a question, why is he an active member of Congress? He’s a security risk to the United States. This is not a hard question, Democrats!

Revelations coming in the next few days that everyone on the right, including Fox News, will be reporting on will reveal the National Intelligence Community has a classified report revealing Swalwell did the Democrat dirty deed with Fang Fang; he had sex with a Chinese spy.

“The report…contains details of the nature of Swalwell’s relationship with Fang Fang including certain sexual acts they allegedly engaged in together.”

Swalwell’s little right-wing conspiracy tweet is a weak attempt to wave his hands in the airwaves to media sources, his followers and donors as if to say “Look at me! January 6th! It’s a big deal! What I did with Fang Fang isn’t’!” His attempt to work up a media frenzy is pathetic.

One can hope there is still someone in the National Intelligence Community that isn’t compromised and can discern what information is truly worthy of being classified. Unnamed sources of Swalwell’s indiscretions said it best,

“’Regardless of whether you would have pegged Eric Swalwell as someone dumb enough to sleep with a CCP spy, the evidence is damning,’ a second source familiar with the report’s details [stated] ‘That report should be declassified…The only purpose served by keeping that report classified is saving Swalwell from embarrassment. That’s not a good enough reason.’”

Bottom line, the roadmap for this week’s news lineup regarding all things Rep. Eric Swalwell (D-China) is predictable given Swalwell’s weak attempt to work up a media frenzy to create a diversion. Conservative news outlets will press on Swalwell’s nerve surrounding all things Fang Fang. Swalwell will continue to tweet how important the January 6th commission he isn’t on is.

In about a week or two, we’ll be reading leaked details of the “classified” documents describing Swalwell’s Fang Fang “bang bang”. The memes will be glorious. He’ll continue to beat the January 6th commission screed. If his story goes as most Democrat’s stories like this – and boy there are a lot – the worst consequence he’ll face is the scrutiny of a divorce attorney. His own party will do nothing to address the egregious security risk Swalwell is.