Next post
Swalwell Attempts to Work Up a Media Frenzy, No One Falls for It 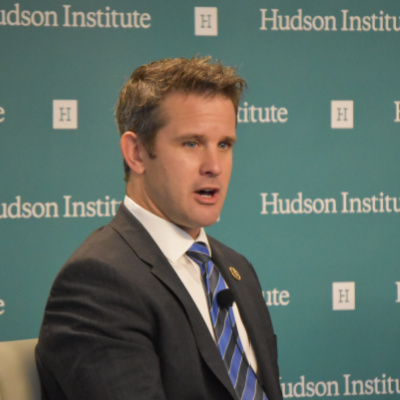 Adam Kinzinger is a Republican Congresstwat from Illinois. On Sunday, July 25, Kinzinger “humbly” accepted a seat on Nancy Pelosi’s January 6 Commission/Inquisition/Kangaroo Court. We know that he humbly accepted the seat because he told us so: 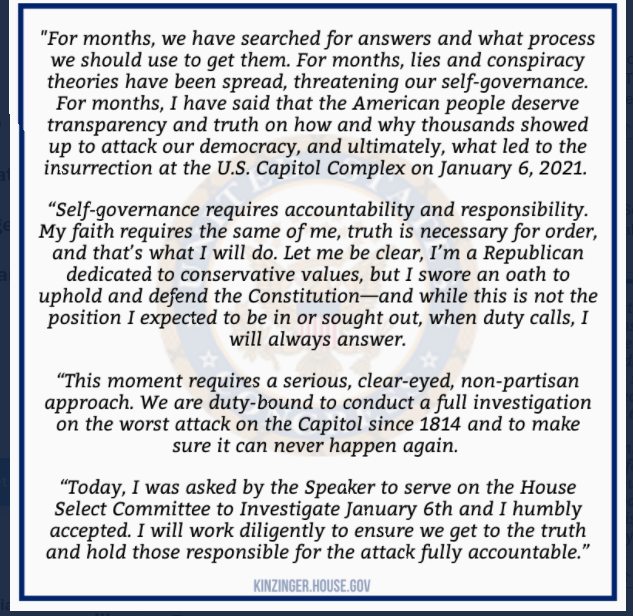 The arrogance of Humble Adam is breathtaking. Our self-governance was not threatened on January 6. Most of the angry Trump supporters never breached the Capitol building on January 6. If January 6 had been an insurrection, rather than a horrible riot, we all would have known about it. He cannot in any way conduct a clear-eyed, non-partisan investigation. He has been a never-Trumper from the day of the Great Elevator Ride. This was not an attack on the Capitol. This was a riot.

Adam Kinzinger was never interested in finding any facts. Before anything was known about what happened, Kinzinger gave the following speech on the very day of the riot:

Yes, we have been lied to for years. Everyone and their brother knew that the Steele Dossier was made up of whole cloth. Yet, Kinzinger said nothing as his colleagues across the aisle, Adam Schiff and Eric Swalwell, lied over and over. These very same colleagues will sit on this January 6 Commission with Congresstwat Kinzinger.

There are so many questions January 6. Why did Pelosi deny the Chief of the Capitol Police Steve Sund’s request for “all hands on deck”?

On Jan. 7, Pelosi said she had not talked to Sund when she called for him to step down.

“And I think Mr. Sund – he hasn’t even called us since this happened,” Pelosi told reporters. “So, I have made him aware that I would be saying that we’re calling for his resignation.”

An aide to Pelosi later clarified she was referring to the hours since the last conversation with Sund, which occurred early in the evening Jan. 6.

Sund told NPR he spoke with Pelosi three times on Jan. 6, including a call with top leaders about reconvening in the House and Senate to continue the count of the electoral votes.

Was the FBI involved in luring people to the Capitol. I wrote about a fired DEA agent, who claims he was lured to the Capitol by an FBI informant, last week. You can read it here. Before the riot started, the DEA agent, Mark Ibrahim, claimed he spoke to an FBI SWAT Team. Why were they there? Adam Kinzinger doesn’t care. He has bought Pelosi’s narrative.

As a matter of fact, Humble Adam sees his role as saving the soul of the Republican Party:

For more than six months, the six-term congressman has been engaged in what he believes to be a battle for the soul of the Republican Party. It’s pitting him against loyalists to former President Donald Trump.

It’s a battle for truth that Kinzinger, in a sit-down interview with Lee Enterprises last week, concedes he is not winning — at least not at the moment.

“No, we’re not winning,” Kinzinger said. “Do I see signs of progress? Yes. There’s a sense that though Trump goes out and speaks, he’s not getting the attention he (used to receive), people are ready to move on. What I worry about is that as Trump fades, Trumpism still stays.”

Damn skippy, Trumpism is staying. Everyone repeat after me: “Trumpism is not about Donald Trump.” Donald Trump was the loudspeaker for those of us Tea Party types.

The biggest question for Adam Kinzinger is why he would hitch his wagon to the Supermassive Black Hole known as Nancy Pelosi. Miranda Divine wrote in the New York Post today:

Nancy Pelosi used to point her angry finger at Donald Trump, but she leaves him in the dust when it comes to busting norms, dividing Congress and causing mayhem. If anyone is to blame for the hyper-partisanship in Washington these days, it’s the spiteful House speaker.

She behaves more like a Mafia don waging a gang war than a dignified, fair and honest presiding officer, which is what the speaker’s role requires.

Pelosi abuses her power in ways that once were unthinkable. Her speakership has been the antithesis of Lincoln’s entreaty to “the better angels of our nature.” Everyone in Congress — and, by extension, the nation — has been sullied by the spite and vitriol she has injected into the political sphere. There is no grace or Christian charity, just the barren wasteland of the zero-sum game, power for power’s sake.

Maybe Humble Adam wants to follow in Pelosi’s footsteps. He doesn’t have a chance. Hopefully, he and Liz Cheney will get primaried and lose to a real Republican.

The least Kinzinger can do is ask, “Who killed Ashli Babbitt?” I don’t have a chance of that happening. Not from Humble Adam the Congresstwat.