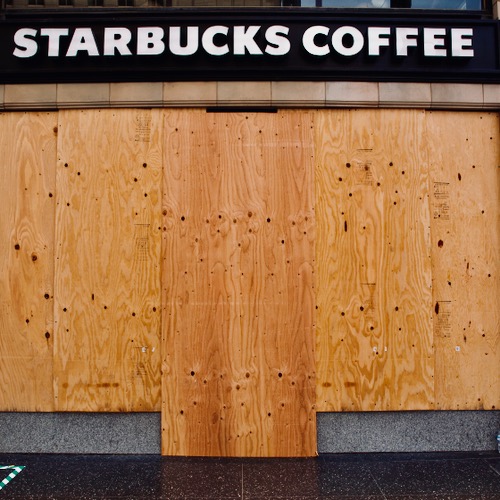 Seattle suddenly realizes that riots are bad now that Biden is President. As if the destruction on Wednesday night wasn’t bad enough, Seattle is now facing a weekend of riots – Portland style. However, there is a new rule! Riots will have consequences!

The announcement comes ahead of a planned protest Saturday afternoon at Occidental Park against ICE.

Diaz said that the department does not respond to many demonstrations because they are peaceful, but the damage caused downtown on Wednesday made it clear to him that some protesters weren’t promoting a specific cause and required a different response.””

Can one simultaneously chuckle, shake their head, and roll their eyes? I think I managed that. The thing is, anyone who, while protesting engaged in destroying property or setting fires needed to be arrested, charged, and jailed a long long time ago. The Seattle police chief admits as much.

“Diaz told reporters he has wanted to crack down on property destruction for months, and that in his opinion, violent protesters and vandals aren’t promoting a cause.”

Ok, a couple of quibbles with that. First of all, the Seattle police department has been hamstrung with the same politics that led to a Minneapolis police precinct being abandoned and burned down during the George Floyd riots. Secondly, Democrat-run cities have seen MONTHS of destruction – far more than simple vandalism. Is ANYONE responsible for burning down buildings, looting stores, destroying entire car dealerships, or breaking windows in jail? No, no they are not.

“A Seattle judge released a suspect who allegedly admitting to being responsible for vandalizing a Starbucks during Antifa’s violent mob on inauguration night. He didn’t even face a modest bail amount.

Police say 33-year-old Justin Christopher Moore admitted “that he smashed the windows and entered the Starbucks to earn the trust of the others in the group.” Moore confessed after being read his Miranda warning, according to the police report.”

Just the other week, in talking with some good friends, we found out that the entire epicenter of the George Floyd riots in Minneapolis is still destroyed and any businesses in the area are barely hanging on. In Denver, the entire Capitol and City/County building area (8 blocks worth) looks like a decades-old graffitied boarded up homeless encampment.

If you read further into the news links I’ve provided above, one thing becomes glaringly clear. Left-wing violence isn’t a big thing. In fact, if we can continue to ignore it, as has been the case since the George Floyd riots started, all that destruction is a major figment of our imaginations.

Seattle’s iconic original/first Starbucks has closed following an attack by #antifa on Inauguration Day where they shattered windows and looted the store. pic.twitter.com/UpchMl11IG

Never mind that. We are just imagining things. None of these riots have happened. If they did, its RIGHT-WING violence that is the problem. Yes indeed, the fingers of blame point right to the January 6 debacle and Charlottesville as THE CAUSE OF EVERYTHING BAD!

“Seth G. Jones, the center’s director, said violent far-right events like the 2017 Unite the Right rally in Charlottesville — which resulted in the death of a counterprotester — have prompted many of the far-left groups to arm themselves and organize more events that have also become increasingly violent and destructive.”

Yes folks, that is a direct quote. If it weren’t for Charlottsville and President Trump, the violence and destruction in Minneapolis, Kenosha, Seattle, Washington D.C., and Portland wouldn’t have happened. Hey Seth??

Do either of those during the Obama Administration ring a bell? I bet it does, but you are oh so willing to ignore that because narrative!

The current narrative being that anything right-wing is bad, but left wing gets bailed out no matter what. Thanks Kamala!

Meanwhile, those wonderful non-destructive rioters? They are all about parading in major groups dressed in all-black because it will reassure bystanders that they aren’t scary. These are the same rioters who claim capitalism isn’t working and decide to demonstrate their angst by breaking windows.

Oh, but don’t you worry! All of this violence and destruction will be solved once our vaunted federal government cracks down on those awful extremists.

Ooof sucks to be a seditionist

“A DC woman said an FBI agent contacted her and said investigators were reaching out to the owner of every phone that touched a cell tower near the riot.” https://t.co/Qlg7V7qqW6

Not to worry though! The Biden team was monitoring the situation(s).

“White House Press Secretary Jen Psaki said Friday that the White House is “monitoring” unrest in Portland and Seattle, but did not comment on the violence.

“We had our team on the ground or national security team even before 12:01 early in the morning on inauguration day, because we wanted to be able to monitor events happening across the country and any unrest that was a resulting from the last couple of weeks,” Psaki said.”

However, when asked…it seems that Biden has zero comment. Gee, I wonder why?

Seattle, who has been cowering under a rock, has evidently found that vandalizing the original Starbucks on Biden’s inauguration is absolutely THE last straw! Riots are bad now, looters beware!