Next post
Bill Clinton Lives In His Personal Purgatory 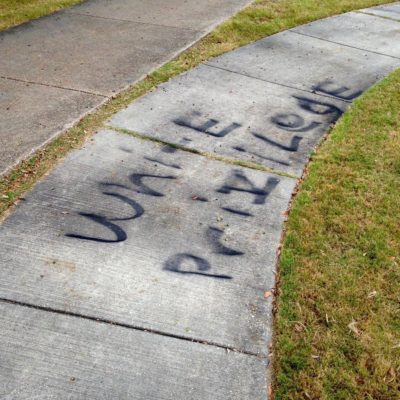 We dig deep into the files of white privilege to bring you Clara Kreabber, a New York City rich kid who is the latest of eight people arrested in a BLM rampage this past Friday night.

Judging by her looks alone and her social media posts that show her grinning from ear to ear whilst holding a goat, Clara looks like a wholesome kid. But the fair-skinned, red-haired little brat is anything but. New York Post aptly dubbed her “Little Red Riot Hood“. The New York Post reached out to her. She replied.

No — not right now — I don’t want to talk about it.”-Clara Kreabber

Clara, apparently, is not quite ready to talk about her white privilege. She actually kind of likes it, we think. What does she not want to talk about? Smashing windows and various and other sundry forms of Friday night vandalism. Chanting “death to America” and “every city, every town, burn the precinct to the ground”. Or perhaps it was the simple fact that she is a rich, WHITE girl partaking in a riot organized by a group that calls themselves the “New Afrikan Black Panther Party”. From the organization’s website:

Our role is not to exercise political or state power over the people, (which is their prerogative), but to influence them, to set positive examples. When our outside structure unfolds and we are able to lead the masses to form their own popular governing bodies such as Community Councils, our cadre will be free to accept election as delegates of these popular political structures: but only as delegates with no greater power than any other delegate. Our leadership role is one voluntarily embraced by the people, based upon our unity and demonstrated ability to lead them in solving difficult problems and winning majority support. This sort of leadership is based on education, reasoned persuasion, and active involvement in the daily lives and struggles of the oppressed peoples.”-The New Afrikan Black Panther Party

Political leanings of the party? Look no further than a quote from Mao-Tse-tung. I rest my case there.

And now we get to who, exactly, is Clara “Little Red Rioting Hood” Kraebber. Clara is a 20 year-old student at Rice University in Houston, Texas. She, apparently, is majoring in Native American history, Native American Politics, and Horse culture. But what do rich kids do when they’re bored with Native American history and Horse culture? They venture out of their family’s $1.8 million dollar 16th-floor apartment on East End Avenue and break windows of the businesses that are the workplaces of the “commoners”. The very workplaces of some of the marginalized folks they claim to stand up for. If this is what an education at Rice University gets you in the way of logic, parents take heed-don’t waste your money.

Speaking of parents, this rich girl’s parents are quite well heeled. After all, why should little Clara get all of the attention here? Let’s make Mummy and Daddy famous, shall we? Kraebber’s mother, Virginia Kindred, runs a Manhattan architect firm that has designed spaces for Columbia University and NYU, and worked on numerous school and business spaces throughout the city. Clara’s father is Markus Kraebber, an Upper East Side child and adolescent psychiatrist who teaches at the Columbia University. Worst. Child. Psychiatrist. Ever. don’t send your kids to him unless you want some psychobabble mixed in with indoctrination bull$hit.

The family also owns a home in (pinkies out) Litchfield county, Connecticut to get away from it all, we’re sure. In fact, Markus and Virginia were probably enjoying a nightcap after a hard week’s work in front of one of their four fireplaces in said Connecticut mansion while little Clara was fighting for justice in the streets being a good, little-Marxist-err-Democrat in the name of Black Lives Matter.

Clara faces up to four years in prison for her Friday night stint. My guess is mom and dad have their lawyers on speed dial. The Friday night riot caused at least $100,000 in damage to local businesses. Perhaps Clara’s mom could loan some expertise to rebuild? Perhaps dad may need to send Clara to sit on someone else’s couch because, clearly, someone was absent in her childhood? Clara Krabber’s story is tragic in the light that she and her family are the faces of today’s Democratic Party. Clara’s parents are wealthy adults who give their children everything besides a good dose of reality. They think reality is taking their children to these protests and encouraging them to wear the virtue-signaling t-shirts, the bracelets, whatever they can get their hands on. They do not show their children the other side because they don’t know the other side. They are the academics, they are the lawmakers, they are the “intellectually superior” that are so far removed from reality themselves.

Here is the dose of reality the psychiatrist and the architect desperately need: you guys have raised a spoiled little rich kid who is a garbage human. You may think she is on the right side of history but you delude yourselves daily. For all of the fortune you have amassed, you are emotionally corrupt and poor. And while your young Clara is an adult, this ultimately falls on you both. Will she sweep up the shards of glass? Will she clean up the graffiti? Will she be made to apologize face-to-face with the workers who are now unable to go to their JOBS because she helped their workplaces and businesses? Will she give up her spot at Rice so that a “person of color” (a condescending term if I’ve ever heard one, if you ask me) can have it? Sadly, don’t bet the goat farm.