Quote of the Day: Should Republicans vote for Trump? 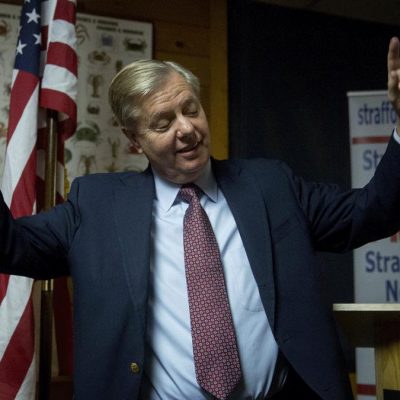 Quote of the Day: Should Republicans vote for Trump?

Voters are not happy with politics in Washington. They don’t like the extremism of Obama and his Democrats. They don’t like how Republicans cave at every opportunity to block said extremism. Things that Americans aren’t fans of — forcibly funding Planned Parenthood, universal health care, a welfare state gone mad, terrorist attacks, the rise of ISIS — can be laid at the feet of both parties. Democrats engineered each of these crises, and the Republicans lacked the balls to stop them. So it’s understandable that voters are angry. They aren’t being listened to. They get angry, and Washington politicians placate them with empty platitudes. Then along came Donald Trump. He was fired up. He was angry. He “listened”. Voters want to burn DC down, and Trump is ready with a match. Their anger has completely blinded them to all reason, all logic. But the problem is, while their anger is understandable, it is leading us down a very dangerous path. If Trump gets nominated, it will certainly spell disaster for this country. Setting Washington, D.C. ablaze may seem appealing in the midst of their anger, but what happens when they can’t put out the flames later, when they’ve come to their sense? Trump supporters are a minority, but they’re a very, very loud minority. So what should the rest of us do if his mob of groupies carry him to the nomination?

Those of us who have long affiliated with the Republican Party would be wise to publicly disassociate ourselves with a very dangerous mix of nationalism and tribalism. That combination has, historically, never ended well and Republicans should be willing to reject it.

It is time for Republicans to give serious consideration to an exit strategy from their own party if Trump is successfully able to take it over. Not doing so will be destructive to Republicans down to the local level. Guilt by association with Trump will have serious repercussions for all Republican elected officials and public figures.

Those who can should begin plotting a strategy into a third party now. The groundwork and funding process need to begin right now. Republicans who are complicit in foisting the dangerous combination of tribalism mixed with nationalism on this country will deservedly see their party wind up in tatters.

Our country must come before our party and that requires all Republicans work together to stop Trump, including building a third party.

Each election, we’ve been told to vote for the GOP nominee because not doing so would ensure a victory for Democrats. So we dutifully marked our ballots for McCain and Romney, only to have two Obama victories. We did it even though neither could be called true conservatives. They were Republicans, yes, but moderates to the core. When faced with someone like Trump, though, we have to acknowledge that everything has changed. There’s a big difference between McCain and Romney, and Trump. McCain and Romney could at least be said to have principles — agree with them or not, they knew what they believed in and didn’t waver. They loved their country. That was obvious. We may disagree about how they went about fighting for it, but there was no doubt that they were patriotic men. Donald Trump, however, has no principles. He will sell out to the highest bidder, time and time again… except as president, it’s America he’ll be selling out. He is out for Number One, he does not care about the good of the country, and he will not put America first. He has never showed himself to be a patriotic man, but rather, someone who loves himself more than anyone and anything else. He brags about making deals, but that’s not a selling point when it comes to politics. What happens when Democrats come along with a sweeter deal? Those “principles” his supporters have deluded themselves into thinking he has will disappear faster than they can blink.

Donald Trump is not even remotely close to being in the same league as John McCain and Mitt Romney.

If conservatives coalesce behind a third party candidate, then chances are, Hillary Clinton or Bernie Sanders will win. That’s the sad reality. But here’s the thing: Donald Trump has the highest unfavorable ratings of any politician… ever. If he gets the nomination, Republicans lose anyway. Polls show Hillary will wipe the ground with him anyway, should he get nominated. So if that’s the case, better that we go out making a principled stand and saying no to this con man that has successfully tricked a third of our party. We’re going to lose either way. 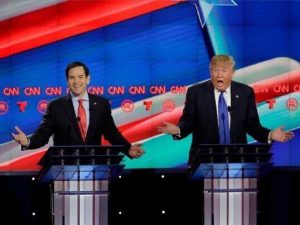