Previous post
Oscar So Boring: Liberal Hollywood Gets Teased For Its Racism

Quote of the Day: Ben Sasse Says He Will Never Support Trump

Quote of the Day: Ben Sasse Says He Will Never Support Trump

To actual conservatives, the world is crumbling. An obnoxious, authoritarian blowhard who approvingly retweets Benito Mussolini quotes and refuses to denounce the KKK seems to be well on his way to receiving the GOP nomination. Consider that: the party that fought so hard for civil rights in the 60s might very well be nominating a man who is willing to ally himself with the KKK. It’s easy to see why people are scared. Some have allowed themselves to be scared into supporting him, likely because of his seeming inevitability (could this explain Jeff Sessions’ insane decision to back Trump?). But for true conservatives, voting for Trump simply cannot ever happen. And in that vein, Senator Ben Sasse has taken a courageous step by writing an open letter to Trump supporters, vowing never to vote for Donald Trump. He outlines all the reasons why in a devastating missive that will surely leave Trump’s supporters defensive and angry (although, let’s be honest, that’s kind of their MO).

Mr. Trump’s relentless focus is on dividing Americans, and on tearing down rather than building back up this glorious nation. Much like President Obama, he displays essentially no understanding of the fact that, in the American system, we have a constitutional system of checks and balances, with three separate but co-equal branches of government. And the task of public officials is to be public “servants.” The law is king, and the people are boss. But have you noticed how Mr. Trump uses the word “Reign” – like he thinks he’s running for King? It’s creepy, actually. Nebraskans are not looking for a king. We yearn instead for the recovery of a Constitutional Republic.

If our Party is no longer working for the things we believe in – like defending the sanctity of life, stopping ObamaCare, protecting the Second Amendment, etc. – then people of good conscience should stop supporting that party until it is reformed.

… The president’s job is not about just mindlessly shouting the word “strong” – as if Vladimir Putin, who has been strongly bombing civilian populations in Syria the last month, is somehow a model for the American presidency. No, the president’s core calling is to “Preserve, Protect, and Defend the Constitution.”

Which of the following quotes give you great comfort that he’s in love with the First Amendment, that he is committed to defending the Constitution, that he believes in executive restraint, that he understands servant leadership?

***“We’re going to open up libel laws and we’re going to have people sue you like you’ve never got sued before.”
***“When the students poured into Tiananmen Square, the Chinese government almost blew it. They were vicious, they were horrible, but they put it down with strength. That shows you the power of strength. Our country is right now perceived as weak…”
***Putin, who has killed journalists and is pillaging Ukraine, is a great leader.
***The editor of National Review “should not be allowed on TV and the FCC should fine him.”
***On whether he will use executive orders to end-run Congress, as President Obama has illegally done: “I won’t refuse it. I’m going to do a lot of things.” “I mean, he’s led the way, to be honest with you.”
***“Sixty-eight percent would not leave under any circumstance. I think that means murder. It think it means anything.”
***On the internet: “I would certainly be open to closing areas” of it.
***His lawyers to people selling anti-Trump t-shirts: “Mr. Trump considers this to be a very serious matter and has authorized our legal team to take all necessary and appropriate actions to bring an immediate halt…”
***Similar threatening legal letters to competing campaigns running ads about his record.

Sasse outlined his conservative credentials in the letter as well, because surely, one of the first things Trump’s supporters will do is attack Sasse’s conservatism. But let’s be realistic here: this is a man who got elected as senator, and then promptly began trying to get term limits amended into the Constitution. He’s been nothing short of a conservative rock star.

Sasse also hammered his point about Trump home on Twitter. Here’s just a few of his greatest hits there:

In America, law is king. But have you noticed how Mr.Trump uses the word “Reign”–like he thinks he’s running for King? It’s creepy, actually

It’s time for us to ask ourselves, what is the President’s core calling? What is his job according to the Constitution?

POTUS’s job is not mindlessly shouting the word “strong!”
Putin has been "strongly" bombing civilian populations in Syria the last month.

Trump praises Putin, China's crackdown in Tienanmen Sq, & speaks of "opening up" libel laws so he can sue critics.
He doesn’t get America.

We can hope that Americans come to their senses and vote for anyone but Trump this week. And there’s still the possibility of a brokered convention. But if Trump is the nominee, what are conservatives to do? We all want to keep Hillary Clinton out of office by any means necessary, and for good reason. However, that doesn’t mean the answer becomes to vote for someone like Donald Trump, a liberal pro-abortion extremist who defends Obamacare, openly says he’ll continue taxpayer funding of Planned Parenthood, wants to appoint his own sister to the Supreme Court, and was close friends with the Clintons, who even came to his wedding. Trump has spoken approvingly of dictators and clearly has no respect for the limitations of the office of the president. He sees this as his personal ticket to unlimited power.

If you’ve ever wondered how Hitler got elected, all you need to do is look around.

We may not be able to stop Trump. We may end up with a Hillary presidency by refusing to vote for Trump. But the alternative is unthinkable. During the Nazi rise to power in Germany, there were people who opposed Hitler vociferously. People spoke out against him, against his policies and his extremism, and many of them died for it. We need to channel that kind of bravery and resolve. Our lives may not be on the line, but our country is, and we can’t abandon our principles now, when it matters most. Sasse is right. If Trump is nominated, then it is time to align ourselves behind a third party candidate. We cannot vote for Trump. Not now, not ever. 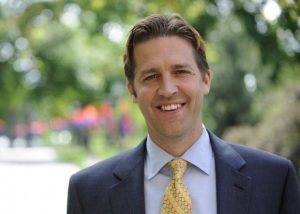