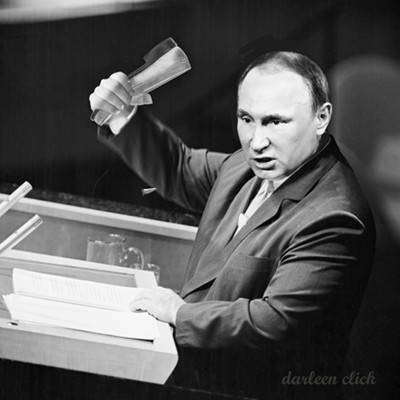 Desperation is what came to mind after learning about Putin’s speech. The entire war in Ukraine has been mostly a debacle. For Putin that is.

It was a speech of threats, demands, and orders.

Putin essentially threatened NATO with nukes if they continue to provide support to Ukraine.

In a national address that was televised Wednesday morning, Putin warned that he would use all the means available to protect Russia’s territory, in what appeared to be a veiled reference to the country’s nuclear arsenal.

“When the territorial integrity of our country is threatened, to protect Russia and our people, we will certainly use all the means at our disposal,” Putin said, adding, “It’s not a bluff.”

Putin accused the West of engaging in “nuclear blackmail” and noted “statements of some high-ranking representatives of the leading NATO states about the possibility of using nuclear weapons of mass destruction against Russia.” He didn’t identify who had made such comments.

Needless to say, the fact that he’s willing to infer or imply that he’d use nuclear weapons if he had to reeks of a desperate man holding onto his power with all his might.

Speaking while receiving credentials from foreign ambassadors to Moscow, Putin said “the objective development toward a multipolar world faces resistance of those who try to preserve their hegemony in global affairs and control everything — Latin America, Europe, Asia and Africa.”

He added that “the hegemon has succeeded in doing so for quite a long time, but it can’t go on forever … regardless of the developments in Ukraine.”

Of course, it’s well known that Putin hates the United States with everything he has. Yet, to threaten the United States in the same speech where he essentially says he has nukes and will use them is more than a bit concerning and should be a red flag to everyone. Will this help Putin with the alliances he’s attempting to make with China, Iran, and others? That’s certainly something to keep an eye on.

The other part of his speech concentrated on the Russian military. In which he issued a decree which was essentially both a demand and order to mobilize more troops. The decree, which you can read in full here, announces the mobilization/conscription of more troops.

1. To announce partial mobilization in the Russian Federation from September 21, 2022.

How many troops? The order isn’t clear, but the numbers batted around say it’s about 300,000 troops. That doesn’t mean that the Russian military will suddenly have that many troops to move to the front. As Laughing Wolf points out here, this kind of mobilization takes time. MONTHS in fact to mobilize, train, equip, and supply them.

Another interesting part about this mobilization demand is the ages: 18-65. That’s the age group who has now been informed they will NOT be allowed to leave the country. That’s where Putin’s desperation comes into play. If his troops are in such a mess that he needs 65 yr olds to suit back up in uniform…

In that regard, is it any wonder that there was a mad scramble to get on flights LEAVING Russia??

Needless to say, Putin’s speech reminded many of us of another speech from long ago.

Nikita Khrushchev threw a tantrum in 1960 at the United Nations. Why? Because speeches were being made that were critical of the Soviet Union.

Putin’s speech this morning was definitively similar in tone without the fist pounding or the shoe banging. We aren’t allowed to criticize Putin nor Russia as a whole. Hence his demands, threats, and orders. Given that, I wouldn’t put it past Biden to print more money to send to Ukraine in the next few days.

Putin’s desperation is on major display here. And desperate men do desperate and dangerous things when cornered. Putin and Russia as a whole need to be watched carefully. Meanwhile, people should start brushing up on their Cold War history if Putin continues to escalate.