Next post
Inflation Reduction Act Will Be Anything But 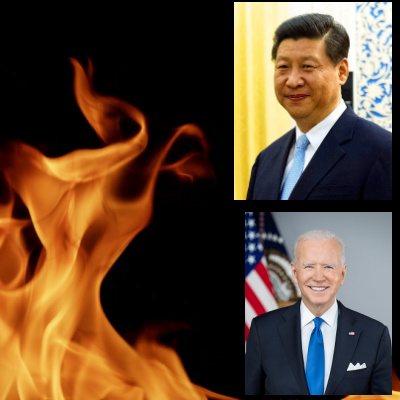 Oval Office resident Joe Biden and President of the People’s Republic of China (PRC) held a two hour telephone call on Thursday, July 29, 2022. The White House readout of the confab makes it like President Xi and Biden were just two executives talking company business. The Chinese readout, on the other hand, had Xi warning Biden against “playing with fire”. It doesn’t sound like Sleepy Joe pushed back. It sounds more like he kowtowed to Xi.

The conversation between the two didn’t really take two hours. You have to allow time for translation from English to Mandarin and vice versa. Then, allow time for Joe’s functionaries to hand him the appropriate notecard to read. Then, Joe’s mumbling and stumbling through the card. But, Joe isn’t ever going to stand up to a world leader. Joe only throws out the bully card when he is talking to normies and journalists, Jack. We have major beef with the PRC. They steal our intellectual property; they have tried to spy on the Federal Reserve; they unleashed the Wuhan Flu on the world killing millions; they send fentanyl through Mexico, and across the border, poisoning and killing thousands, and they don’t want Speaker Nancy Pelosi to travel to Taiwan. We have major, bigly beef with China.

Dig this readout from WhiteHouse.gov:

President Joseph R. Biden Jr. spoke today with President Xi Jinping of the People’s Republic of China (PRC). The call was a part of the Biden Administration’s efforts to maintain and deepen lines of communication between the United States and the PRC and responsibly manage our differences and work together where our interests align. The call follows the two leaders’ conversation on March 18th and a series of conversations between high-level U.S. and PRC officials. The two presidents discussed a range of issues important to the bilateral relationship and other regional and global issues, and tasked their teams to continue following up on today’s conversation, in particular to address climate change and health security. On Taiwan, President Biden underscored that the United States policy has not changed and that the United States strongly opposes unilateral efforts to change the status quo or undermine peace and stability across the Taiwan Strait.

The White House is playing with us, right? Biden wants the U.S. and PRC teams to focus on health security and climate change? The Chinese don’t buy the anthropogenic climate change whale caca. The Chinese are building one coal plant per week, and it ain’t clean coal technology. The Chinese don’t care about health security for their people or ours. We can’t die soon enough for them. There is absolutely no one expert in any single field of inquiry in the Biden Circle of Incompetents.

Among Biden’s foreign policy bungles in the last few months (I am leaving out Afghanistan, which was a clusterf*ck.), was the Russian “minor incursion” remark, threatening to “take out” Putin, and while in Japan, Biden claimed we would defend Taiwan.

Q from @nancycordes: "Are you willing to get involved militarily

to defend Taiwan, if it comes to that?"

But, then San Fran Nan wants to hit up Taiwan after visiting Japan in August. China is unhappy about it. The bunch of big girls’ blouses that populate the Biden Circle of Incompetents do not have the intestinal fortitude to stand up to China. This, naturally, let to China sniffing the weakness and warning us about “playing with fire”.

Nancy wanting to go to Taiwan prompted an aggressive response? From the UK Guardian:

The Chinese president has warned Joe Biden against “playing with fire” over Taiwan in a highly anticipated phone call that lasted more than two hours on Thursday, as tensions remain high over the House speaker Nancy Pelosi’s potential trip to the island next month.

“Those who play with fire will be perished by it. It is hoped that the US will be clear-eyed about this,” Xi Jinping, according to a Chinese statement. He also urged the US to implement the three joint communiques that serve as the foundation for relations between the two countries “both in word and in deed”. Xi vowed “resolutely” to safeguard China’s national sovereignty and territorial integrity and said this is “the firm will of more than 1.4 billion Chinese people”.

Complain all you want about President Trump’s acting like a bull in a China shop. Did anyone ever warn us about “playing with fire” when Donald J. Trump was our Chief Executive? We would laugh if it wasn’t so sad. The Dementia Patient in the Oval Office is a loud bully who is all smoke and no fire.