Previous post
Trial By Mob: Chauvin Jury Punts So They Can Leave

Next post
Democrats: The True Stain On The Nation's Soul 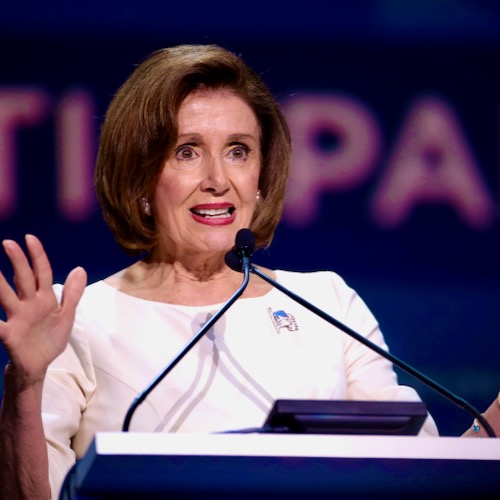 The death of George Floyd is worthy of thanks according to Nancy Pelosi. Less than an hour after the verdict, she stood at a microphone and said that.

Oh yes folks, here’s the full video for your edification.

How absolutely fabulous of Nancy! To tell the freaking world that she’s oh so thrilled George Floyd was killed because justice of some sort has been and will be served. Uh huh…is she on CRACK??!!

As Deanna noted here, the verdict is guilty for Chauvin, but was justice for ANYONE truly served? The jury wasn’t sequestered, witnesses were intimidated and getting doxxed, plus politicians who were under a gag order by Judge Cahill opened their gaping yawps and called for MORE protests and MORE riots. Yes, Maxine Waters, I am looking at YOU.

From the transcript, this is how Nancy thanked George Floyd for getting killed.

“And thank God, the jury validated what we saw, what we saw. So again, thank you, George Floyd, for sacrificing your life for justice, for being there to call out to your mom. How heartbreaking was that, call out for your mom, I can’t breathe, but because of you and because of thousands, millions of people around the world who came out for justice, your name will always be synonymous with justice. And now we have to make sure justice prevails in the sentencing. But that’s, you know, it’s its own procedure.”

Needless to say, many and I mean MANY people are absolutely appalled by her remarks.

“The backlash was instant with people pointing out that Floyd did not die willingly for the causes of police reform and racial justice, but was killed by Chauvin.

Katharine Krueger, a features editor at ELLE, quickly reacted with a post on the Discourse Blog titled: “Nancy Pelosi How F—— Dare You.”

Others pointed out that her definition of sacrifice is NOT what sacrifice is. Yes, George Floyd was a drug-addled mess…but he didn’t willingly give his life in order to start a mis-guided nationwide movement of feelings, riots, looting, and political grandstanding. Nope, he was just resisting arrest because he wanted to get more drugs into his system.

Ummm… he didn’t sacrifice his life… he was brutally, horrifically murdered. What the hell is this https://t.co/dpaWchJWcO

Powerful should stop pretending to empathize, it always comes across psychotic https://t.co/QdJzOUiQwT

While Nancy is getting dragged for her remarks, others such as Barak and Michelle Obama are virtue signaling.

“For almost a year, George Floyd’s death under the knee of a police officer has reverberated around the world — inspiring murals and marches, sparking conversations in living rooms and new legislation,” the Obamas said in a joint statement on Tuesday. “But a more basic question has always remained: would justice be done?”

“In this case, at least, we have our answer. But if we’re being honest with ourselves, we know that true justice is about much more than a single verdict in a single trial,” they said.”

But wait! According to Nancy, we and especially George Floyd’s family are supposed to be THANKFUL that he was killed in the name of justice! That’s not the case? Huh, that’s interesting. Someone who is not a fan of the verdict, and likely not a fan of Nancy’s “thanks?” AOC.

Keep in mind, Nancy along with many other politicians set the tone and the standard for the trial MONTHS ago. She outright called Floyd’s death murder. Secondly, the whole kneeling thing at the U.S. Capitol was pure grandstanding. Third, she went to bat for Maxine Waters yesterday and defended that piece of dreck for opening her mouth this weekend and calling for more riots and looting.

Someone else issued an incredibly tone-deaf comment as well.

George Floyd came to Minneapolis to better his life. But ultimately his life will have bettered our city. The jury joined in a shared conviction that has animated Minneapolis for the last 11 months. They refused to look away and affirmed he should still be here today.

Riots and looting that has destroyed businesses is most certainly something that has “animated Minneapolis” for the last year. There are business that will NEVER recover. People are moving out of the city in droves, yet Jacob Frey says THIS?

It’s nearly as bad as Nancy telling the world we should be thankful George Floyd was killed. Don’t get me wrong, she’s totally saying this because the verdict went the way that she and the rest of the Democrat media establishment wanted it to. However, for her to give thanks over George Floyd’s death as if he willingly sacrificed himself to become a worldwide narrative?