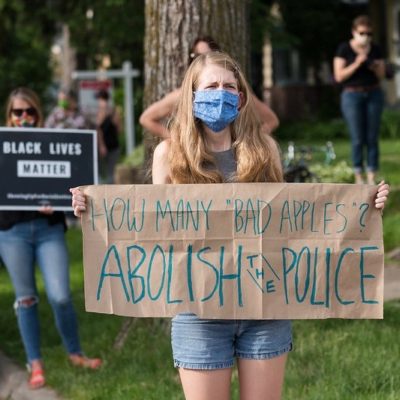 As America watched and awaited the jury’s verdict on the Derek Chauvin trail in Minneapolis yesterday, Democrats and Joe Biden were “praying for the right verdict”.

And just like that, prayer has returned to our Nation. Don’t take that as a win, yet folks. We won’t mention the violence, looting and the arson that lead up to this verdict. We won’t mention the immense pressure these jurors were under to punt for “the right verdict” Joe was praying for. We won’t mention the severed pig’s head that was found a few days back on the wrong doorstep of an innocent person presumed to be a defense witness for the trial we won’t mention boarded-up businesses and millions of dollars in damage.

Of course, any person with a conscience who watched the George Floyd video would feel that the justice system did its job. And, there is nothing wrong with personal reflection and looking deeper at one’s actions towards humankind-all Americans-regardless of ethnic background. But boy, yesterday was the Democrats’ day to shine. This day was not about George Floyd, a man who lost his life, and the justice system at work. This was about using George Floyd, and his family, and black Americans as a stepping stone to talk about the “true stain” on the nation’s soul and further the agenda of division and hate. Rub that stain in. According to Democrats? Systemic racism is the key. Joe Biden said it himself yesterday.

Today, today’s verdict is a step forward. I just spoke with the governor of Minnesota, (he) thanked me for the close work with his team. I also spoke with George Floyd’s family again, remarkable family of extraordinary courage. Nothing can ever bring their brother or their father back. But this can be a giant step forward in the march toward justice in America.”-Joe Biden

Blah, blah, blah. The governor thanked me. I did all of this. Except, the Democrats in our cities, in our news media and in D.C. took giant steps backwards last night. This in New York:

New York: #BLM protesters tell white people dining outside to “get the f— out of New York” & that their white-owned taquerias aren’t welcome. The crowd chant along. pic.twitter.com/E8D7B2rkQ8

Democrats, without a doubt.

And MSNBC’s Jason Johnson, was simply “not pleased“.

So, acquittal or a hung jury would have been a “good thing”? Then, there was AOC:

That a family had to lose a son, brother and father; that a teenage girl had to film and post a murder, that millions across the country had to organize and march just for George Floyd to be seen and valued is not justice.

And this verdict is not a substitute for policy change. https://t.co/tiDkhl9Dk4

And how can we forget the spineless, blithering idiot, Nancy Pelosi thanking George Floyd for being killed? Honestly, it was enough for me to say I wanted the eff off this planet last night. But Democrats want to lecture non-like-minded people of different political persuasions that our systemic racism is the stain on the nation’s soul? Keep in mind this was the woman who ate $20 pints of ice cream on YouTube last year while some people (white, black, all colors, all backgrounds) were out of work. They want to point fingers and tell us we’re the reason for this stain? They want us to look inward. Well, our deep-thinking President thinks we should, anyway. Too bad he’s not asking the same of the Democrats-the puppet masters-that surround him to do the same.

Black men, in particular, have been treated throughout the course of our history as less than human. Their lives must be valued in — our nation. Full stop.”-Joe Biden

Damn. The Democrat’s translation to the second paragraph of The Declaration of Independence, I suppose?

We hold these truths to be self-evident, that all men are created equal, that they are endowed by their Creator with certain unalienable Rights, that among these are Life, Liberty and the pursuit of Happiness.”

ALL men are created equal, Joe, in case you are not aware (and there is a lot you are not aware of these days). The Declaration of Independence does not say “all white men are created equal but black men are less than human“. We think there may be a little bit of racist projection going on there, Mr. President. But, go on. Tell us about this great stain on our nation’s soul, as you put it, and how the Democrats in your tribe are going to make this all better.

After all, we all should have learned something from the “summer of protests”, right? They were groovetastic. Just like the ’60s, man, when Kamala’s parents were out there having a gas and protesting the fuzz. (Yay for Marxism, pass the ganja!) They were “right and necessary“, according to our current POTUS. Just like it was “right and necessary” for people to judge all law enforcement officers based on the horrific actions of Derek Chauvin. Just like it was “right and necessary” for white people to go into black neighborhoods, trashing them and causing $1 billion plus in riot damage. Mark my words. Liberals will spin this. I’m waiting for the article about white jurors being pushed to render a guilty verdict for Derek Chauvin because they are tired of the riots, the division and the destruction and this, somehow, is linked to white supremacy. Wait for it. I’m sure it’s coming.

Want to remove the stain on our Nation’s soul? Remove the instigators who are now in charge. Remove the policies that keep minorities in poverty and at a disadvantage. Remove the divisive rhetoric that is masked as “socially woke”. Stop rubbing salt into the stain. Stop saying people of certain races and backgrounds cannot do certain things-it’s condescending. Stop treating other HUMANS as inferior beings and simultaneously, apologizing for your “superiority” as if you had an ounce of virtue. Stop calling riots, “protests”. Stop calling all cops “bad apples” and let the good ones do their jobs. Stop deluding these poor Americans who actually voted for your lot that you all mean to help because you really don’t. Stop pretending to have souls because, you really don’t. YOU, Democrats, are, collectively, the stain on the Nation. Stop dividing us. Just stop.