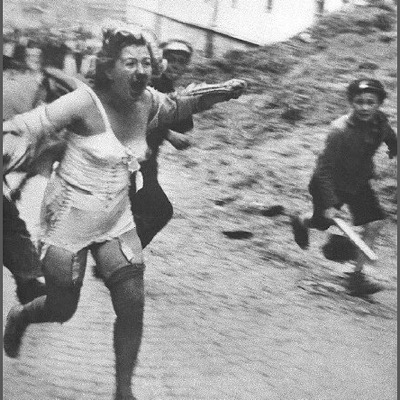 The featured photo is from the Ukrainian Lviv pogroms of 1941. Click on the link if you want to muddle through the confusing history of Slavic nationhood and culture that always brings Jews to the same place as the objects of pointed violence. Slav. Slavic. Slave. The etymology didn’t start in Africa. Look at the glee in the children’s savage faces, they know no one will stop them. There will be no punishment. They are truly the freest of slaves.

These young Ukrainian Jew killers revel in their freedom, as does every current supporter of the collective Jewish final solution – the death of Israel.  You can see the same look on America’s street corners where Jews are being assaulted. A happy brute applying any weapon at hand against the ancient scapegoat, totem of evil. The Jew.

Paladin initially held off writing about the most recent eruption of wanton wannabe Jew murder, until he realized it wasn’t going to stop. That the American Muslim terror directed against Jews will continue until these Palestinian supporting storm troopers become tired and worn out beating the Hebes. The Muslims will take a breather, re-group and the assaults will resume as soon as the wannabe killers are rested.

No one in the American Government is there to restrain them. There were some feeble/ineffectual noises in congress, but not enough to derail or halt the Pogrom.  Local leaders such as De Blasio are in fact promoting it. So far as Paladin knows, the National Socialist mayor of New York hasn’t denied the charge. This violence has been approved at the highest social and governmental levels despite (wink-wink) convenient condemnations.

In New York there’s a Dung Beetle eager to get back at it again—now the Palestinian goon is already out on bail. Does he look even the slightest bit remorseful for running over Jews? There some bonus video out of LA in that link – Palestinian Jew Chasers.

These stories have become so commonplace and predictable we’re at risk of overlooking the looming consequences.

In NYC, the NYPD is searching for four Jew Beaters – while synagogue worshippers are harassed with impunity.  Jew-mauling reached the 200 “Incident” mark forcing the officially Anti-Semitic Democrat Party to finally march out President Mumbles to say something soothing. Here’s a fairly current list of Muslim inspired Jewish attacks in the US and Canada.

In London it was worse, if possible. Besides the now famous “rape your daughter” fetish, one sign reads: “Netanyahu surpasses Hitler in barbarism.”

Where can a sane person go with this reckless hate and insanity? Answer: only to a 21st century death camp – that’s where it leads.  Such self-indulgent madness always leads to the same place, the extermination of Jews. Now under the cover, under the banner of American liberal Democrats who demand President Mumbles hold Israel “Accountable“.

Luckily for our would be Jew-Killers here in the USA, a $114k a year public transit employee, a known-lunatic with anger-management issues went postal on his coworkers in San Jose. This spate of murder broke the fragile and temporary spell of caring about Jews, aka “Temporary Jew Care”, and managed to revive the call for barely disguised civilian arms confiscation and shift the narrative away from the ongoing American Pogrom.

This narrative shift came at a critical time, saving our local and imported National Socialists, for their well-earned rest— like their brother rapists in Gaza – only to fight another day. Meanwhile, American Jews will wait, some will purchase firearms, some move to the Dakotas, others will simply ignore the coming normalization of Judenrein. Liberal and lefty Jews will continue to vote for their eager executioners and life will go on as usual in the Blue City Sewers. Yet sooner or later such American creatures of denial will be herded into the next shower room. While the rest of us, who know the score – watch for the next spark, or crisis, cleverly turned into an excuse to fire up the local ovens.