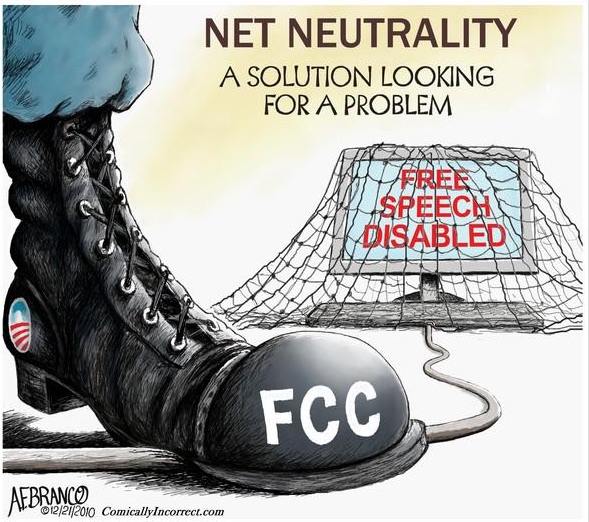 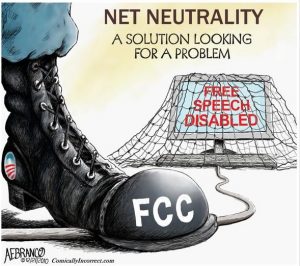 If it ain’t broke, we can always count on unelected federal bureaucrats to “fix” it. And it appears that the Internet as we know it is about to be forever changed. That’s why a delay in the 5-member vote, scheduled for this Thursday and expected to pass, has been requested by the FCC’s two GOP members. Why the concern? Think ObamaCare for the web. And that should frighten us all, because Mr. Obama, like an overbearing, meddling in-law, has his hands all over the regs. From The Wall Street Journal:

“The big politicization came when President Obama in November demanded that the supposedly independent FCC apply the agency’s most extreme regulation to the Internet.”

What is that reg, you may ask? Well, FCC Chair Tom Wheeler‘s plan, released to his fellow commissioners ahead of the February 26th vote, is significantly tougher than the regs he initially outlined in 2014, and shared with the public, and are suspiciously similar to the approach Mr. Obama publicly called for last November.

“The more than 300 pages of new regulations are secret, but Mr. Wheeler says they will subject the Internet to the key provisions of Title II of the Communications Act of 1934, under which the FCC oversaw Ma Bell.”

I fully trust the regulation of the internet to the same government which can't build a website with a working backend. #NetNeutrality

RT @DailyCaller: Mark Cuban “Having [the FCC] overseeing the Internet scares the sh*t out of me" http://t.co/1FCCzHYNhI #NetNeutrality

“Title II authorizes the commission to decide what ‘charges’ and ‘practices’ are ‘just and reasonable’—an enormous amount of discretion. Former FCC Commissioner Robert McDowell has found 290 federal appeals court opinions on this section and more than 1,700 FCC administrative interpretations.

Defenders of the Obama plan claim that there will be regulatory ‘forbearance,’ though not from the just-and-reasonable test. They also promise not to regulate prices, a pledge that Republican FCC Commissioner Ajit Pai has called ‘flat-out false.’ He added: ‘The only limit on the FCC’s discretion to regulate rates is its own determination of whether rates are ‘just and reasonable,’ which isn’t much of a restriction at all.’

The Supreme Court has ruled that if the FCC applies Title II to the Internet, all uses of telecommunications will have to pass the ‘just and reasonable’ test. Bureaucrats can review the fairness of Google ’s search results, Facebook ’s news feeds and news sites’ links to one another and to advertisers.”

“Just and reasonable.” And false promises not to regulate prices. Did you catch that? Here are two excellent explanations of what we’re facing:

Here's one of the best detailed explanations of why #NetNeutrality is anti-Freedom http://t.co/GErZVVkgYs

Bingo. And from Senator Ted Cruz:

The Negative Consequences of #NetNeutrality Explained in 2 Minutes: http://t.co/jwVR37pYiZ via @YouTube #PJNET

Does that sound “neutral” to you?

And this veiled affront to our freedoms is why a voting delay has been requested, specifically because the proposed regulations, which are being withheld from public eyes, have reportedly been altered—to include Obama’s “just and reasonable” test, no doubt—since their initial release last year:

“‘We respectfully request that FCC leadership immediately release the 332-page Internet regulation plan publicly and allow the American people a reasonable period of not less than 30 days to carefully study it,’ Republican Commissioners Ajit Pai and Michael O’Rielly said in a statement Monday. ‘Then, after the commission reviews the specific input it receives from the American public and makes any modifications to the plan as appropriate, we could proceed to a final vote.’

‘With the future of the entire Internet at stake, it is imperative that the FCC get this right,’ the commissioners said. ‘And to do that, we must live up to the highest standards of transparency. Transparency is particularly important here because the plan in front of us right now is so drastically different than the proposal the FCC adopted and put out for public comment last May.’

‘Over the past few weeks, it has become clear that the American people are growing increasingly concerned about government regulation of the Internet and that they want the commission to disclose the plan,’ the commissioners said. ‘Indeed, an independent survey last week found that 79 percent of Americans favored releasing the plan prior to any FCC vote.'”

Here are the three Democrat bureaucrats who will be voting to regulate our Internet:

Despite all this, “Net Neutrality” has its supporters, including Twitter:

And Blackberry, jumping on the monopoly bandwagon:

“BlackBerry is already lobbying the FCC to force Apple and Netflix to offer apps for BlackBerry’s unpopular phones.”

So much for free market capitalism.

The five-member commission has no business voting on a sweeping “We Have to Pass It to Find Out What’s in It” internet overhaul that the public has not seen, and certainly does not fully understand. And just like everything the federal government sticks its nose in, the new ObamaNet utility will inevitably become slower, costlier and, eventually, rationed.

Make no mistake, in my humble opinion this move to regulate the Internet is not about “neutrality.” Just like everything The O’s administration does, it’s another federal power grab. King O’Marxist doesn’t like competition, and he doesn’t like diversity of thought, particularly from conservative voices like those on this blog, and you can bet that that nebulous “just and reasonable” guideline left in the hands of a faceless bureaucrat—Lois Lerner comes to mind—will be wielded like a Roman legionary’s gladius against opposing political speech it deems “unjust.” It’s a blatant violation of our First Amendment guarantees, like nothing we’ve ever seen before. And the myopic Congress, in all its ignorance and laziness through the years, has willingly given away its power to stop it.

“A Democrat on the Federal Communications Commission wants to narrow the scope of new net neutrality rules that are set for a vote on Thursday, The Hill has learned.

Mignon Clyburn, one of three Democrats on the FCC, has asked Chairman Tom Wheeler to roll back some of the restrictions before the full commission votes on them, FCC officials said.

Clyburn’s changes would leave in place the central and most controversial component of Wheeler’s rules — the notion that broadband Internet service should be reclassified so that it can be treated as a “telecommunications” service under Title II of the Communications Act, similar to utilities like phone lines.”