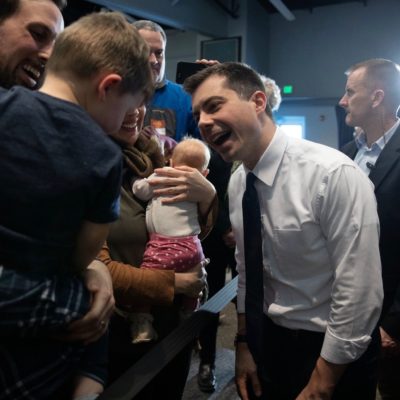 This very well may be a campaign first. What happens when a presidential candidate helps a nine-year old boy come out as gay on stage at a rally? Ask Pete Buttigieg.

Is it me or doe this poor nine year-old boy look absolutely terrified on that stage? The young man, posed a question to Buttigieg in the form of a letter at a Denver rally:

Thank you for being so brave. Would you help me tell the world I’m gay too? I want to be brave like you.”-Zachary Ro

Young Zachary wants to be Brave Like Buttigieg. The man, the war hero, who journeyed outside the wire 119 times. That’s bravery. No offense to this boy but I think he needs to look to some different role models. First off, no offense to Zachary. Being nine is hard. Being nine and decidedly gay is harder, I’m sure. But where, oh where, are this child’s parents in this? Oh, right. They sent the letter in to Mayor Pete. They urged him to go on stage.

I think the boy's mom should not have done this in public. Now there will be a video which I've seen on Twitter that might cause some bullying at his school. I hope that doesn't happen but it might

One could hope this won’t happen but any one who has been around a bunch of nine year-olds know that this is not the case. Kids are mean. They don’t even need a reason to be-but here is a reason served up on a silver platter and immortalized for the world to see and kids, as their filters are seldom developed at that age, will act on this. There is no turning back for Zachary Ro now. A young boy who barely knows anything about sexuality is now, thanks to mom submitting a letter to Mayor Pete, decidedly gay. And the democrats, the party to which Pete Buttigieg belongs, have placed a child on stage to better their cause…to be the obligatory check in the box at a rally. They used a nine year-old child. Is Mayor Pete going to come to this nine year-old boy’s rescue in his cape when thugs who pick on him at school need discipline? Nope. These kids won’t get suspended or detention because the schools feel it’s “unfair” to punish bullies and the school will host a “kindness week” or some stupid-ass event like that to combat the daily bullying that happens. It’s doubtful Mayor Pete would be any part of this equation to stop any of this. Bravery, he says.

Congratulations to this poor child’s parents for hurting their child and queueing him up to be exploited on stage to promote Pete’s political ambitions.

Back in the day, we had the pageant moms. You know, the ones who dressed their girls up in clothing and makeup that far exceeded their maturity and made them look like creepy mini-adults. This weird cult of moms still exists today. I’m convinced they go in with their daughters for breast augmentation surgery at some point. This is sick. But the pageant parents have been cast aside in favor of a new culture of parents in our schools. The woke parents with the obvious political agenda. Instead of a bumper sticker on the mini van that says “my child is an honor student at XYZ Middle School”, we have parents proudly displaying the “My child is proudly LGBTQ at XYZ” on their Subarus. It’s as if these kids have become the status symbols and displays that woke parents brag about to other purple-haired, septum-pierced woke parents over a Kombucha. I can see it now, “My Zachary is only nine and knows he’s gay.” Other mom: “Well, I got you beat. My son is a drag queen and is on You Tube making like he’s snorting ketamine! Take THAT!” These parents are on a quest of their own political ideologies. Heaven forbid the schools don’t conform and make that gender change in the school records. Heaven forbid schools have a sexist “boys versus girls” contest. These parents are all over the school threatening lawsuits.

I have no problem if a child shares with his/her parent that he or she is gay or if a parent perceives their child as displaying gay tendencies. I honestly do believe a parent knows at some point WHO their child is. What I do have a problem with is the parents’ over-zealous enthusiasm to place their child in the limelight because he or she makes them look like the virtuous, tolerant Americans who are clearly better than those “Trump-voting, hateful bigots”. They do this without ANY regard to the impact these actions may have on their children. This nine year-old boy is now on every news feed across the world and while he may gain a certain amount of celebrity out of this, there is a dark side to celebrity that these parents are either too clueless to understand or just they flat-out willfully ignore. These parents are the new stage parents of a new generation. And just as child actors sometimes discover in their late teens and early adult years how screwed up their parents have made them, these kids, I fear, will reflect back and feel the same or worse trauma. One thing is for certain. The democrats will take them, every single one of them and chew them up and spit them out in the name of self-promotion. Yes, even a nine year-old boy is fair game. Turn the Page.