Next post
Principles! The University of Alabama Has Them 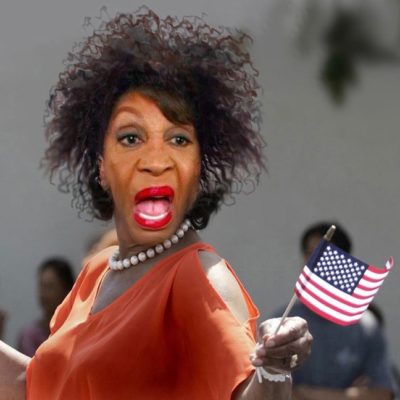 Apparently, last week’s Twitter rant didn’t quite garner the attention Maxine thought she’d receive so in an act of defiance, protesting in her own way yesterday, Maxine Waters took to Twitter to solicit nicknames for POTUS:

Seriously, are we in junior high school? I know 13 year-olds who have more maturity than this. I also know 13 year-olds that have better things to do than to get on Twitter and solicit a mass name-calling session in honor of the person they love to hate. In an effort to “empower” women, to stir up the resistance if you will, this did not go the way Waters anticipated. Not one bit.

Simple. You call him President.

Your COMMANDER IN CHIEF

Based on the 20-30 comments I read, this didn’t turn out the way you intended 🤣🤣 pic.twitter.com/zMYayqgI00

This is the modus operandi of the left in full effect. Don’t like someone? Call them names. Don’t just go after the offender, though. Take everyone else with them, too. Start a mob and get others to join in on your childish behavior. Do this to deflect what little YOU have done to improve the morale or the environment around you. Do this to deflect the attention off of what a rotten and crooked person YOU are. Maxine Waters is not a champion for women. She is not a champion for the poor.

“But Donald Trump has called so many people names”, they say. “He’s hurt our feelings. He’s nothing but a big bully. An orange Cheeto. A sexist pig. A racist, a fascist, a power-hungry, insensitive person“.

You know what’s insensitive? To get up in front of your supporters and tell them to hunt down and harass people who don’t agree with your ideals. If that’s not enough, you go on to tell them to corner these people in restaurants, department stores, gasoline stations and encourage them to go after their families! You know what else is incentive and inhumane, Maxine? The fact that your 43rd district in Los Angeles has fallen victim to some of the worst slums in The United States, with homelessness, filthy, unlivable conditions and rats who harbor fleas that carry typhus! You want to push back, you say? You want to do something for your country? Forget the Twitter rants and the lobbying to Impeach the President. We say take care of your own house, Maxine. And if you want to throw a stone at the White House, just take a look yesterday’s deal on immigration. An accomplishment which we hope is a good thing. What did you do yesterday, Ms. Waters? Right. You sat on Twitter asking your followers to throw some shade at the President. Constructive. Productive. Inspiring, for sure.

One would think Maxine Waters has better things to do than lollygag on a social media platform and solicit a name-calling session but perhaps on some level, she’s part of her “low IQ” self-fulfilling prophecy. You know what we call Donald Trump, Maxine? We call him 45!