Next post
Intelligence Did Not Support Troops For January Six 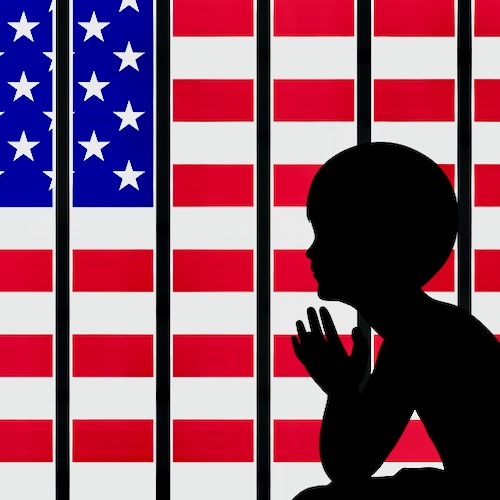 Kids in cages were horrific when Donald Trump was President. NOW, however, children in migrant facilities are a wonderful thing!

“Dozens of migrant teens boarded vans Monday for the trip down a dusty road to a former man camp for oil field workers here, the first migrant child facility opened under the Biden administration.
The emergency facility — a vestige of the Trump administration that was open for only a month in summer 2019 — is being reactivated to hold up to 700 children ages 13 to 17.

Government officials say the camp is needed because facilities for migrant children have had to cut capacity by nearly half because of the coronavirus pandemic. At the same time, the number of unaccompanied children crossing the border has been inching up, with January reporting the highest total — more than 5,700 apprehensions — for that month in recent years.”

Yes, The Washington Post turned themselves into a pretzel to glowingly describe how wonderful these “cages” errr…childcare facilities are. Did they talk about the schools, the meal plans, the hair salons, soccer fields and basketball courts at any point during the shrieking banshee outcry when Trump was President? NOPE.

It was kids in cages and hair on fire headlines all over the place back then.

“Headlines from 2018 include, “The American tradition of caging children,” and “The real reason we’re locking children in cages.”

Even the Post’s editorial board as recently as September 2020 wrote, “The tableaux of caged migrant children, torn from their parents’ arms, should be among the most enduring images produced by the president’s policies” in a piece warning about what Trump’s immigration agenda in a second term would look like.”

All of which was accompanied by breathless reporting from TV news media outlets working to ensure that, if this continues, children will SUFFER at the hands of evil ORANGE MAN BAD and his minions.

That was THEN folks.

Amazingly, some progressives and other folks on the left, aren’t too thrilled with the new description and glowing reports of how wonderful these new air-conditioned shipping containers are. But please, whatever you do, don’t call it kids in cages.

In January, 5,707 children showed up at the border, last December that number was 4,855. That’s a significant increase. Especially when you consider the sheer numbers of people heading this way from South and Central America.

“Arrests of illegal immigrants are up across the U.S.-Mexico border, especially in the Del Rio sector and the Rio Grande Sector in South Texas, the border’s busiest regions for illegal crossings. The Del Rio sector, for example, saw a 172 percent increase in apprehensions from December to January. Last week, amid the power outages in Texas, the mayor of Del Rio pleaded with the Biden administration to stop releasing illegal immigrants into his community, saying, “We do not have the resources available to house and accommodate these migrants within our community.”

Meanwhile, the message has gone out to sending communities in Mexico and Central America that, with a new administration in charge now, if you can get into the United States, you can stay. To get a sense of what’s coming, consider an Associated Press report last week on a migrant shelter in Mexico, the first one Central Americans reach after trekking through a stretch of Guatemalan jungle. It has hosted nearly 1,500 migrants so far this year, compared to 3,000 for all of last year.”

Stop and think about that for a minute. A nearly 200% INCREASE in apprehensions of those trying to cross into the United States ILLEGALLY. When did that increase happen? December 2020-January 2021. The stats for the migrant shelter in Mexico should raise big red flags. If that shelter is seeing that kind of increase in numbers, our borders will be seeing the same increase, and that is a serious serious problem.

Meanwhile the Biden Administration, as we wrote here, is releasing illegals into the U.S. without ensuring they have been tested for Covid, the flu, or likely any other diseases.

Furthermore, there will be an escalation in violence at the border and in the United States as Biden’s weak sauce immigration policies continue to take effect. It has been a feature in the past and will be a feature in the future, the history of illegal immigration has clearly demonstrated that.

Jeff Sessions was so openly racist that even Reagan couldn’t appoint him.

Yet the 1st Native woman to be Cabinet Sec is where Manchin finds unease? https://t.co/wyki5iE36Y

Meanwhile, the news media is now attempting to tell us that migrant facilities for children are the most wonderful things ever invented. Kids in cages? That was so yesterday.

UPDATE: Jen Psaki tries to put a delicate spin on the story…and fails.

.@PressSec is asked if the admin is putting "kids in cages" with the new migrant detention for children being opened at the border:

"This is not kids being kept in cages. This is a facility being opened that is going to follow the standards of other HHS facilities." pic.twitter.com/3uihs0nBqJ