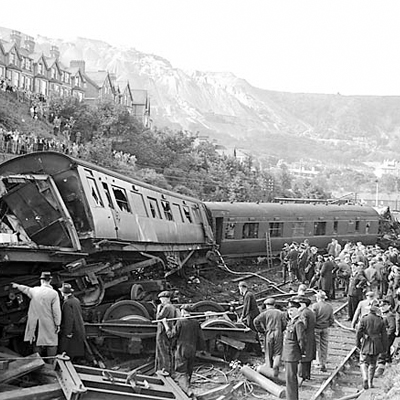 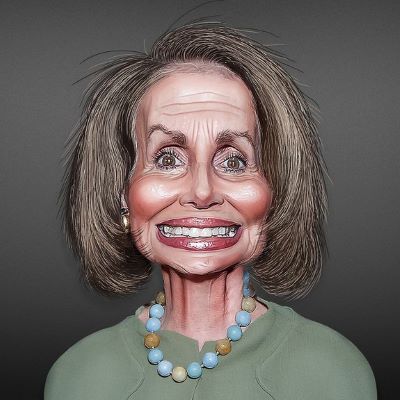 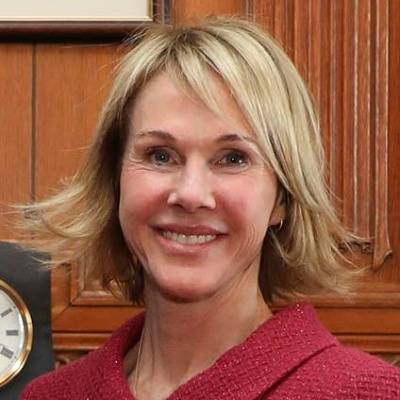 President Donald Trump has nominated current U.S. Ambassador to Canada to fill the post formerly held by Nikki Haley as U.S. Ambassador to the United Nations. Kelly Knight Craft will have to fill the enormous shoes left by Nikki Haley? And, they are ginormous shoes. The Victory Girls Blog has generally been Haley fan girls. You can tell by the sheer number of articles we have written praising her work. A few are here, here, and here.

So, what’s the 411 on Kelly Knight Craft? Craft was born in 1962 and graduated from Glasgow High School in Western Kentucky. She graduated from the University of Kentucky (whose Wildcats beat my Vols the other night, grr) in 1984. Her marriage to Joe Knight is her third and she has two children from her previous marriages. She was an alternate delegate to the General Assembly of the United Nations during the Bush 43 Administration. I had to Google it but apparently delegates to the United Nations General Assembly do not cast votes but observe the goings on at that evil (editorial comment) body. The alternate delegate, I guess, gets to watch the delegate watch or take the delegates place watching if the delegate cannot attend. Can you believe this mastodon excrement?

Kelly Knight Craft was confirmed to the post of Ambassador to Canada by a unanimous vote of the U.S. Senate in August of 2017. Craft, 56, was a business executive and philanthropist before serving as ambassador to Canada. Her husband, Joe Craft, is president and CEO of coal producer Alliance Resource Partners.

raft, 56, was a business executive and philanthropist before serving as ambassador to Canada. Her husband, Joe Craft, is president and CEO of coal producer Alliance Resource Partners.

The couple are major Republican donors, having given about $1.5 million to GOP candidates in 2016, including $270,800 to Trump’s committee or his joint fundraising committee with the Republican National Committee.

President Trump tweeted, of course, the announcement of Mrs. Craft as his pick: 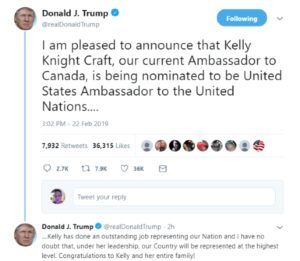 Senior Senator from Kentucky Mitch McConnell praised her selection in a statement:

Senate Majority Leader Mitch McConnell (R-Ky.), who said he recommended Craft, a fellow Kentuckian, was quick to celebrate her selection and called it “an exceptional choice for this critical post.”

“Kelly Craft is a strong advocate for American interests and will be a powerful representative of our great nation at the U.N.,” McConnell said in a statement. “She has a long record of service to her state and the nation and I’m confident she will continue to serve with distinction as America’s voice to the world at the United Nations.”

As you are probably well aware, Trump had nominated former State Department Spokesperson and Fox News Reader Heather Nauert to fill Haley’s shoes (as if). Her nomination blew up over a Nanny hired, in the the country legally, but without work papers.

Okay, small rant here. In the name of all that is holy, people, what the heck are you thinking? While you are clawing your way to the top of the ladder in whatever industry, you cannot take five bloody freaking minutes to properly vett the person you are leaving your, in my opinion, most important job to? I don’t care that you went through a placement service. It’s your priority to do the vetting, you fecking idiot. And, yes, I blame Heather’s husband too. Both partners in a couple are responsible for the care, education and well-being of their children.

I was pretty meh on Heather anyway. I kind of liked John James, the failed Senate candidate, but successful in everything else, from Michigan.

Here is a Canadian television interview with Kelly Knight Craft introducing her to Canada:

Hmmm, cannot tell much about her from this, of course, the team she is talking about is the University Kentucky Wildcats. Grrr.