I’m beginning to wonder if Secretary of State John “Lurch” Kerry has been sniffing the Heinz Ketchup a bit too much. That’s the only explanation I have for his recent statements. According to Breitbart News:

Oh REALLY? Lets take a look at the last 14 months shall we? First Obama sneers about the JV squad, then we find out that ISIS has and continues to enslave, rape, and slaughter those who aren’t following their version of Islam. Yazidis, Assyrians, and Iraqi Christians have all been destroyed by this evil group. This is the same group that is continuing to amass a major war chest so they can inflict terror wherever and whenever they want. 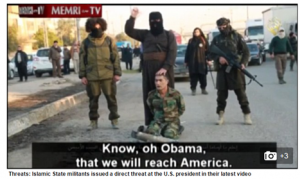 How about this? To date, the evil that is ISIS has horrifically beheaded at least 14 people, killed a young woman, and burned a fighter pilot to death. Yet John “Heinz” Kerry insists there isn’t an increase in terror threats across the globe. Do you think perhaps he took one to many wipeouts on that sailboard of his??  Or perhaps it’s the pink bicycle’s fault?

I thought the horrific beheadings of the 21 Coptic Christians in Egypt just a few short weeks ago would be a reality check. I’d mention the Charlie Hebdo and kosher deli attacks, but he handled that with music and an awkward hug.  You know, I wonder if Kerry is taking into account that ISIS wants to destroy anything and everything they don’t agree with? No, that can’t be it!  Otherwise CNN’s Ben Wedeman and Dana Ford wouldn’t report that ISIS is destroying more than lives, they are destroying history:

They take sledgehammers to statues with an uncommon gusto — destroying in seconds what may have survived centuries.
New video released by ISIS shows militants smashing what they say are antiquities at a museum in Mosul, Iraq.
Men shove statues off pedestals, and use hammers and drills to destroy what’s left.
An unnamed militant offers the following explanation: “These antiquities and idols behind me were from people in past centuries and were worshiped instead of God.
“When God Almighty orders to us destroy these statues, idols and antiquities, we must do it, even if they’re worth billions of dollars,” he says.

Some may say that destruction of art and antiquities is bad, but we shouldn’t tie it to terror. I beg to differ. When you have a group running through a country destroying or silencing any and all that they “say” doesn’t conform to their belief, in this case Islam, then there is a definite terror problem. Quite frankly, it’s a terror problem we’ve seen in the past. Hitler’s Nazi’s did the same thing. Anything and everything Jewish was wiped out of the culture of Germany as much as possible. The music, dance, art, food, beliefs, the way of life, and the people…. All gone.

ISIS is on that same path whether Kerry wants to believe it or not. The one bright note in this is that there are some who disagree with Kerry’s assessment. The Director of National Intelligence, James Clapper, has a different take on the matter according to Fox News:

Clapper on Thursday said that in 2013, about 11,500 worldwide attacks killed about 22,000 people. But in the first nine months alone of 2014, he said, preliminary data from a University of Maryland research unit show nearly 13,000 attacks killed 31,000 people.
Half of those attacks and fatalities were in Iraq, Pakistan and Afghanistan, he said. He said the Islamic State conducted more attacks than any other terror group in those first nine months.

Honestly, I think the numbers touted by James Clapper are low. The fact is, ISIS has increased their reach. The FBI even tells us that ISIS has reached into every corner of our country. Not only that, but we find out that several key ISIS players aren’t poor and impoverished, rather they’ve come from wealthy families yet have chosen to walk the path of evil. That, along with the synopsis above tell me and anyone based in reality (which Kerry left a LONG time ago), is that 2014 was indeed one of the worst years of terror we’ve faced in a very long time.

The terror threats in 2015 have and are increasing. We are facing danger and evil that we can’t imagine. Nearly 100 more have died at the hands of ISIS in the last few days. The Brooklyn 3 are arrested trying to join the ISIS Pied Piper, and how does our Secretary of State respond?  With music, hugs, awkward power point presentations and denials of the very real threat ISIS poses to us all.