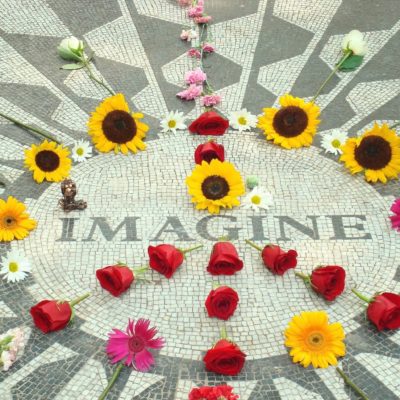 Twitter blew up a few days ago with mixed reviews of Gal Gadot and Friends’ take on John Lennon’s Imagine. Gadot got together and collaborated with the likes of Sarah Silverman, Kristen Wig, Will Farrell and Jimmy Fallon to name a few.

One did not need to imagine the blowback Gadot and company received after their quarantined collab:

I've always hated this song. "Imagine no possessions" sung by some of the wealthiest people in the world 🙄

Even The New York Times hated it…and that’s saying something. But days later, train wreck Madonna pulled into the station with her “fried fish” rendition of Vogue:

We’d say, “go home, Madge, you’re drunk” but she is already sitting in her multimillion-dollar home (with a plethora of meds on the bathtub ledge) attempting to sing. Makes you really think about the wonders of in-studio editing, doesn’t it? At least she’s not talking about blowing up The White House this time. And, at least she had her face stretched before all of this. No more outpatient plastic surgery for a while, Mo! And we won’t even talk about the “fried fish” conspiracy theories. Not touching that junk at all.

But alas…we did not see the last of Madonna. Today, she graced us with her poetic prose, naked in a rose-milkbath. I know, just what we ALL wanted to see:

We’re all in this boat together.
And if the ship goes down, we’re going down together.”-Madonna

Yep. We’re all equalized, Madonna. Right down to the rose petals in our bathtubs!

We also heard expert advice, courtesy of CNN, from Madonna’s ex-from-many-many-moons-and-plastic-surgeries-ago, Sean Penn. This regarding deployment of military forces:

There can be no argument about, ‘Oh, it’s going to become a police state’ and so on. These people understand America and what it’s about.”-Sean Penn

Thanks, Spicoli. Go get yourself some tasty waves and a cool buzz. Maybe your ex-wife could hook you up with the latter.

Not all celebrity takes were bad. I didn’t hate Neil Diamond’s “Hands, washing hands“. And he sang on tune. But most celebrities and celebrity culture in general will find it hard to actually imagine the plight that normal Americans will go through in the next few weeks and months. This makes their overtures ridiculous, irrelevant, narcissistic and completely tone deaf.

Celebrity culture has been in a desperate need of a makeover and perhaps this can be the turning point. While most of them like to think they are intellectually superior to us commoners, they are clearly showing off their utter cluelessness right now. Case in point-Gal Gadot et al. Here they all are. Singing John Lennon’s Communist Manifesto. Yep. Communism is a great idea, isn’t it? Except for right now. They don’t want that right now. Why? They WILL get health care if they are sick. Some of their fellow homeless humans in the city…you know, the ones they want to live with “as one” (but not really)? Maybe not so much. They have money and cash reserves. They can find ways to get what they need, when they need it-even in a pandemic. They can even summon someone to go to the supermarket for them so they do not have to come into contact with-God forbid-an infected shopping cart. They are so far off the reservation it really isn’t even comical anymore. It is sad. They are sad, sad human beings still striving for attention when again, this is not about them.

While they sit, quarantined in their large homes making videos that continue to virtue-signal to Americans, healthcare workers, grocery store employees, truck drivers and first responders, to name a few, are working overtime and at great risk. Americans are worried about the welfare of their families, physically and economically. They can sing about no borders, no countries, no religion, fried fish, whatever the hell they imagine as relevant. Somehow, at this point in time, they still think they are. Expelling borders when there is a pandemic? Hmm. Sounds ingenious to me, guys. Casting out religion when people need their faith to get themselves through? Another miserable, horrible thought courtesy of the Hollywood big machine.

You may say I’m a dreamer…but I’m not the only one. I hope someday they’ll wake up and won’t be as dumb.