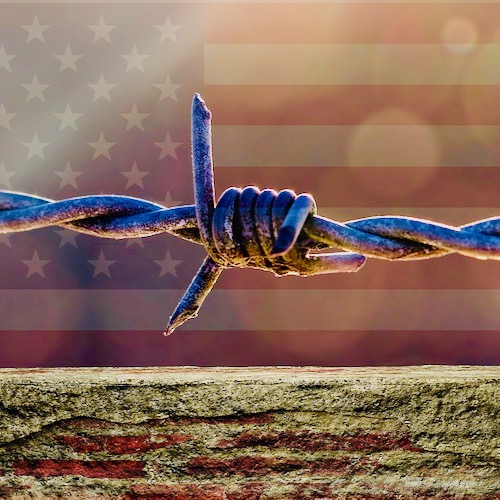 Yes, well over a million illegal immigrants are quietly being pardoned by the Biden Administration.

Federal prosecutors are quietly dismissing stacks of cases against illegal immigrants under a Biden administration mandate that could be on pace to effectively pardon 1 million people by 2024, according to leaked information reviewed by the Washington Examiner.

Attorneys for U.S. Immigration and Customs Enforcement have begun to throw out tens of thousands of the 2 million backlogged cases in immigration court following a political appointee’s order not to go after illegal border crossers from before the November 2020 election.

You read that correctly, given the backlog, thousands or more illegal immigration cases are being wiped from the court dockets. This is essentially amnesty. Wipe your case from the court? You are pardoned and free to roam about the country, no questions asked.

The Washington Examiner obtained leaked video recordings of virtual meetings that Kerry Doyle, ICE’s principal legal adviser, held with the more than 1,200 ICE prosecutors who bring cases against illegal immigrants nationwide, in which she explained in detail who should not be targeted for deportation. Illegal immigrants identified as national security and public safety threats, or those who had crossed the border illegally after Nov. 1, 2020, would be the only cases ICE would pursue. All others would be dropped.

So, any case prior to November 2020, who isn’t a supposed national security threat will be pardoned under this new mandate. How many pardoned thus far? Nearly 100,000 illegal immigrants have been given amnesty since last October.

How about prosecuting those cases and all the new cases instead? How about ensuring that the cases go through the courts as they should be? Oh wait, maybe because some of the prosecutors have been booted to the curb?

Matthew O’Brien, who was appointed in 2020 as an immigration judge, is a former research director at the Federation for American Immigration Reform (FAIR), a group that calls for lower levels of immigration overall and stricter border policies.

Before that, O’Brien worked at the U.S. Citizenship and Immigration Services (USCIS).

Pretty suspect when judges who were appointed under President Trump are suddenly let go when their probation period is over. There’s a few others who are on the hook as well. Meanwhile, as the Biden Administration continues to pardon thousands, the influx of illegal immigrants continues.

How many illegals showed up in the last few months?

That sheer volume alone brings many logistical & security challenges. Our agents are fully engaged 24 hours a day, giving it there all to keep everyone safe. pic.twitter.com/pPe9iR1R2k

That was ONLY the arrests! How many more are sneaking into this country? We have NO idea.

NEW: Video from @TxDPS shows hundreds of migrants wandering off the side of a highway near Eagle Pass, TX this afternoon after they crossed illegally. This is in Border Patrol’s Del Rio sector, which continues to be inundated with massive groups almost daily. @FoxNews pic.twitter.com/FqgLSmT4Ui

Which has led to folks such as Governor Ron DeSantis trying to figure out ways to combat this crisis since Border Czar Kamala Harris continues to be AWOL.

A little background on Kerry Doyle.

Doyle adamantly opposed ICE enforcement actions and doggedly supported sanctuary city measures during her career as an immigration attorney. As recently as 2020, she spoke in favor of a Massachusetts bill, the “Safe Communities Act,” that would have applied sanctuary city policies statewide and claimed that ICE was an “agency that is currently out of control.”

Speaking before the Boston City Council in September 2019, Doyle accused ICE of being “a tool of almost terror to the immigrant [sic] community” and wanted the Boston Police Department (BPD) to believe as much. In that same testimony, she adamantly opposed the idea of the BPD sharing intelligence information with federal immigration officials. Her speech revolved around her umbrage with the Boston Regional Intelligence Center, a database the BPD uses to fight against crime and terror, which she claimed had a “very negative impact” because this information was being shared with ICE.

This is who is in charge at ICE. Doyle’s political views are such that immigration, legal or illegal, is totally fine as long as it gets Democrats what they want. A new voting block.

That’s right, by pardoning these illegal immigrants, they are now free to apply for legal permanent residency and benefits. The very definition of amnesty.

Biden’s border policy is ‘let them all in and damn the consequences!’ Does the Biden Administration want to break this country? I think they do and we cannot let that happen.