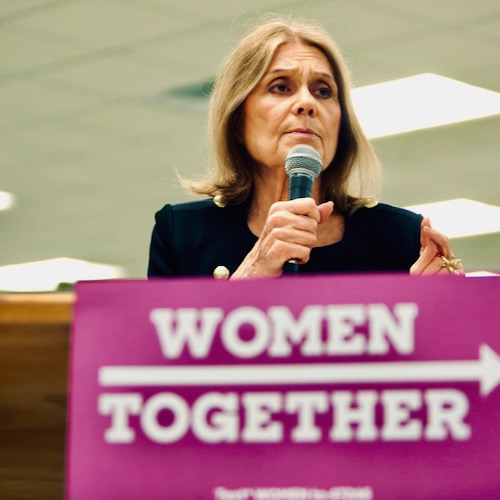 Gloria Steinem is a huge fan of abortion. So much so that she’s offering a place to stay for anyone traveling to New York City to get an abortion, now that the Dobbs decision has ruined everything.

The morning after the Supreme Court’s overruling of Roe v. Wade, the famed feminist told The Post that her contribution to the cause will include opening her Upper East Side apartment to women in need of abortions.

“Everything from the small effort to say, ‘I have a guest room if you need to come to New York state, you can stay here,’” she said of her initial efforts.

“Which of course is limited since it’s only one room,” she added, laughing. “But at least it’s something that I can offer.”

How very…virtuous of the 88 year old feminist. She’s long been about women’s rights. So much so that if a woman with all her equal rights and stuff, wants to destroy a baby in the womb in order to have a ‘fulfilling life’ then she’s all for it!

Abortion Spas and Destination Travel up next.

Yes, dear dear feminist Gloria who has spent decades blaming men for everything that women haven’t gotten. She spoke a few years ago about her illegal abortion.

“So I sat there as a reporter for New York Magazine, listening to women tell their stories that were tragic and ludicrous and every human emotion all wrapped into one, and suddenly I thought, ‘Wait a minute, I had an abortion.’ And actually one in three American women had needed an abortion at some time in her life, so why is this illegal and why is it dangerous? And it’s the kind of revelation that comes from people just telling the truth and discovering you’re not alone.”

Ah yes, that’s been her schtick from the get go. Blame the men for everything. Say it’s the patriarchy that is at fault for all of women’s woes. Never mind the fact that it takes two to tango when it comes to getting pregnant. It’s ALWAYS the man’s fault.

What role could the ERA have in helping to curb the assault on women’s reproductive freedom, with Roe having fallen?

If democracy means anything, it means decision-making power over our own bodies—and that means equal decision-making power. Can men be forbidden to have a vasectomy? So why are women uniquely governed—in terms our physical selves—by various state laws? Well, the answer is because we have a womb. We happen to have the one thing guys don’t. And when you look back in history at authoritarian movements around the world, you learn that often the first thing they have done is to outlaw abortion and declare family planning a crime against the state.

*Sigh …abortion isn’t ‘family planning.’ It’s murder plain and simple. Then, in the same interview she uses Hitler as an example!

The Third Reich is one example of that, correct?

Hitler was elected, which in and of itself we sometimes forget. And the very next day he padlocked all the family planning clinics and declared abortion a crime against the state because obviously he was after creating an Aryan race. Whatever people’s motives are for wanting to restrict or eliminate the right to choose, the control of reproduction is the first step in authoritarian and religious authoritarian movements.

Moving along, as Gloria Steinem extends her invite to all those seeking abortions, Rachel Maddow is warning of anti-abortion terrorism.

You want to know what a REAL act of domestic terrorism is Rachel? THIS, right here in Northern Colorado.

A Colorado Christian crisis center for pregnant women was vandalized and set on fire Saturday morning, a day after the US Supreme Court reversed federal protection of abortions.

Police responded to a fire at Life Choices in Longmont around 3:20 a.m., and found the building ablaze with covered with graffiti messages referencing the controversial overturning of Roe v. Wade, officials said.

Gloria, might I suggest any one of these fine folks as your next tenants?

Pro-choice rally in Dallas, TX. today.
QUITE the scene, to say the least…
pic.twitter.com/fKhwyIV7Up

Something else to consider regarding Gloria and her stance on abortion.

Supposedly Gloria was in desperate straits as she says many women have been and are today. Except she had enough money in 1957 to be heading to India with a stop in England beforehand to seek out a doctor for an abortion.

So, is Gloria Steinem serious about offering her guest room for anyone who wants an abortion or is she grandstanding?

I’d say grandstanding. You see, she’s only about helping women when it suits her, and offering her guest room is totally for show.