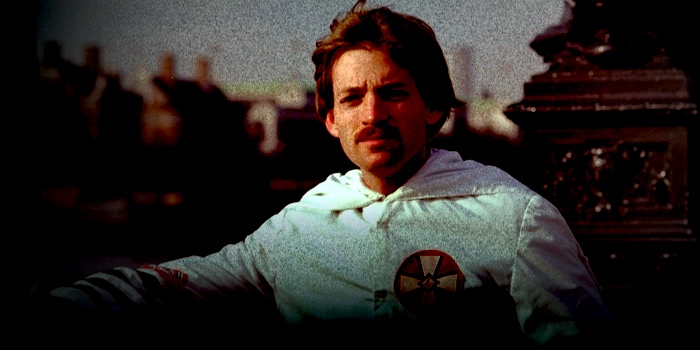 by Marybeth Glenn in Headlines 9 Comments

If former Ku Klux Klan Grand Wizard David Duke is praising your candidate, you might be backing the wrong candidate.

David Duke did one term as a Republican Louisiana State Representative, however, both parties get to claim him. He ran in the presidential primaries in 1988 and 1992, once as a Democrat, once as a Republican. He also has a laundry list of other failed runs for office, as well as a stent in the populist party. He is an American white nationalist with heavy antisemitic leanings who describes himself as a “racial relist.” He has in the past supported voluntary racial segregation, white separatism, and the right to preserve ones own heritage.

Long before Duke voiced his opinions on the GOP candidate, people were already comparing the two:

You can’t make this stuff up.

If you’re on the fence, now might be a good time to jump off the fence. Then replace the fence with a large wall.

Possibly even a moat. 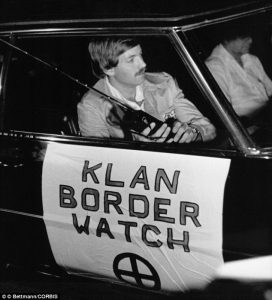 Maybe fill it with sharks.

“Our clear goal must be the advancement of the white race and separation of the white and black races. This goal must include freeing of the American media and government from subservient Jewish interests.” – David Duke

That guy just said Trump is the “best of the lot.” Mull that over.

After ranting about “Jewish supremacy” and Jewish domination of the media, Duke took time out of two of his radio programs last week to talk up Trump’s candidacy as a “great thing,” praising the Republican candidate’s plan to deport the estimated 11 million undocumented immigrants living in the U.S.

“Trump is really — he’s really going all out. He’s saying what no other Republicans have said, few conservatives say. And he’s also gone to the point where he says it’s not just illegal immigration, it’s legal immigration,” Duke said last week on his radio show, also pointing to Trump’s plan to put more restrictions on work visas to ensure Americans are hired before foreigners. Buzzfeed News first reported the comments on Tuesday.

Duke has not officially endorsed Trump, because Trump doesn’t hate the Jews enough. No joke, that’s his reasoning.

Duke, who previously served in the Louisiana statehouse and ran for U.S. Senate in that state, did not endorse Trump and said Trump remains untrustworthy for his “deep Jewish connections” and support for Israel.

David Duke is also an avid Holocaust denier – he even spoke at the Iran Holocaust Conference in 2006.

Iranian President Mahmoud Ahmadinejad‘s conference questioning the Holocaust came to an end Tuesday, but not before hearing former KKK Imperial Wizard David Duke say that gas chambers were not used to kill Jews.

“The Zionists have used the Holocaust as a weapon to deny the rights of the Palestinians and cover up the crimes of Israel,” Duke told a gathering of nearly 70 “researchers” in Tehran at Ahmadinejad’s invitation.

The sad thing about this news is that it’s not that surprising, especially to Conservative pundits who have been following Trump’s run for office.

David Duke coming out as a Trump supporter confirms my Dixiecrat theory.

Conservatives, I beg of you, please do not allow this man to be the face of the Republican party any longer. For years the left has tried to pin us down with racist and hateful labels, why give them legitimate reason to continue? Even DailyKos is taking advantage of the opportunity to shove a stake into the heart of the progress we’ve made. They quoted David Duke today, and then linked articles concerning the White Supremacist that have made appearances at Donald Trump events which attempted to introduce you to “Donald Trump’s base.” They also cite an attack on a homeless Hispanic that was allegedly done by Trump supporters.

The danger to the Republican party, or conservative movement as a whole, is very real. As Conservative writer Ben Domenech writes in The Federalist:

At its best, these frustrations would be articulated by the Republican Party in ways that lead to more freedom and less government. At its worst, these frustrations cast aside Constitutional principles, encourage dictatorial behavior, and become the toxic political equivalent of the two Southie brothers who claimed Trump inspired them to beat up a Hispanic homeless man.

Dismiss Donald Trump if you will, but tonight in Alabama he is expected to draw 35,000 people. Try to do that with any other presidential candidate. The phenomenon is real, and the danger Trump presents for the Republican Party is real. Even without winning the GOP nomination, which is still a remote possibility at best, his statements have tapped into a widespread anger that has the potential to transform the Republican Party in significant ways. Ultimately, Trump presents a choice for the Republican Party about which path to follow: a path toward a coalition that is broad, classically liberal, and consistent with the party’s history, or a path toward a coalition that is reduced to the narrow interests of identity politics for white people.

Do you not see that the longer he has your support, the more ammo they have against us during the general election? Those who say they won’t vote for him, but are encouraged by the way he has conducted himself, need to seriously rethink their position. The issue is not Trump, the issue is the strength of his following. There comes a time when one crosses over from sounding anti-politically correct to simply sounding like a horrible person; Trump crossed that bridge long ago, and just like honey attracts Pooh Bear, and steak attracts dogs, hate attracts hate. Even if you like his loudness, he’s not the one you want to be loud on your behalf. Spread the word, stop the madness.