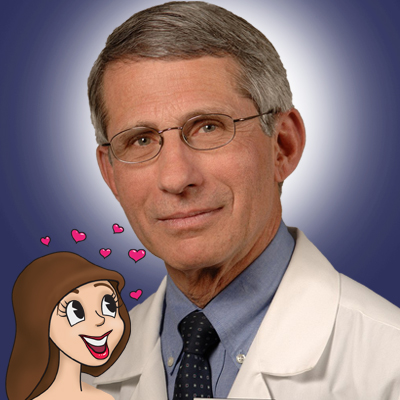 It’s not officially authorized — at least not that I know of — but there’s a Fauci Fan Club on social media. The members appear to be mainly women who have a crush on Dr. Fauci, the diminutive octogenarian doctor with the New Yawk accent.

The video networking site TikTok is full of such women, like this head case.

This is a cult pic.twitter.com/WqBsx1DAQe

Or this gal warbling about getting her “Fauci Ouchie.”

We have a mental health crisis in this country pic.twitter.com/Q2dtFSoZn7

And now teenage Disney star Olivia Rodrigo has cranked the Fauci Fan Club insanity up to full cringe. On Wednesday she met at the White House with Fauci to create a video encouraging young adults to get their Covid vaccines. Or their “Fauci Ouchies,” if you will.

Rodrigo read tweets from Fauci fans to the dictatorial doc, giggling at his responses. She also explained the meaning of “man crush Monday” to him since he had no clue:

To which Fauci replied:

“If man crush Monday gets you vaccinated, go for it!”

Rodrigo and Fauci also discussed music, and Fauci told the 18-year-old about the best concert he ever attended — in the late 1950’s:

“If I tell you the greatest concert that I’ve ever been to you’re going to faint. The reason is, I’m so old it goes back to the late 1950s at the Paramount Theatre in New York City, which was a Motown concert with The Temptations, The Four Tops.”

After the interview ended, Rodrigo probably grabbed her iPhone and asked it, Siri, who is Motown?

Here’s the video of Fauci hearing Olivia Rodrigo read vaccine tweets, which the White House posted on their social media accounts. Be prepared to wince.

I don’t know about you, but I’ve had it up to my eyeballs with the Fauci Fan Club. People with their Fauci candles, Fauci face masks, Fauci pillows and bobbleheads — they’ve hit full cringe with their Fauci worship.

But I have a feeling that I’m not alone, and that more and more Americans want Fauci out of their lives. 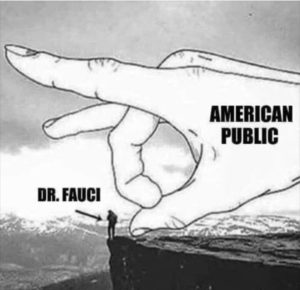 So does Florida Gov. Ron DeSantis. He’s marketing “Don’t Fauci My Florida” merchandise, which has progressives tearing their hair out.

Don't Fauci My Florida merchandise is a HUGE hit. 🚨

Secure yours NOW on our @WINRED store to support your favorite freedom-loving Governor. ⬇️#DontFauciMyFlorida #KeepFloridaFree https://t.co/63kgCCMcKX

Does anyone really think that a Disney pop star will get millions of Millennials and Zoomers to vaccination stations for their jabs? I’m guessing not. But the Biden administration is making bank on it, along with their door-to-door Have-You-Met-Our-Lord-and-Savior-Dr-Fauci vaccine pitches. What the Biden administration and their media minions don’t understand, however, is that we’re oversaturated with this stuff. If we want a vaccine, we know how to get a vaccine. And no little pop star or Fauci Fan Club will be enticing the most recalcitrant Americans to get their jabs because it’s our choice.